The LG G7 comes hot on the V30S ThinQ's heels, and comparisons are inevitable. The G7 is as reminiscent of the V30S as it gets - same footprint and bill of materials, same look, and cool paint jobs. The notch is new, of course, and the dual-camera is now vertically oriented, but that's about it. 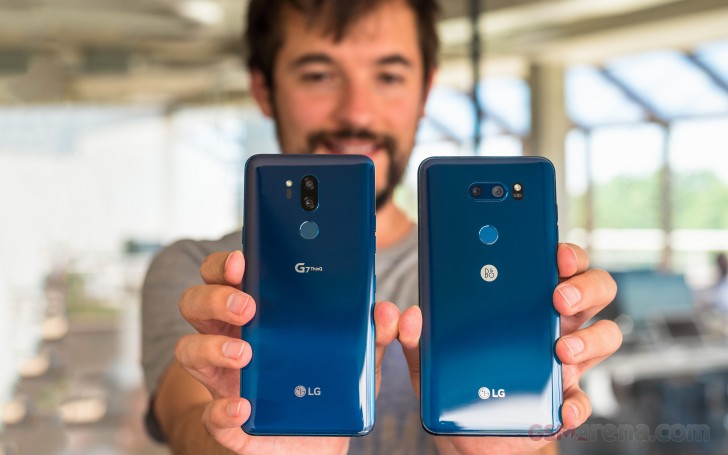 LG G7 ThinQ next to the LG V30S ThinQ

With the new big screen and solid build, it makes us wonder if the G7 is a successor to the G6 or the V30, but that's up for interpretations, we guess. Only time will tell if we need both series alive.

So, the design may have been passed for upgrades, but there are some major boosts in performance and camera, and we'll get into those in a bit.

The LG G7 looks like any other glass-sandwich phone with a metal frame and won't impress with the shape as it keeps it basic (but stylish!). LG did try to make up for that with some eye-catchy paint jobs and those hues are indeed stunning. LG has carried over the V30S original colors - New Moroccan Blue, New Platinum Gray, and Raspberry Rose - plus a brand new one - New Aurora Black. 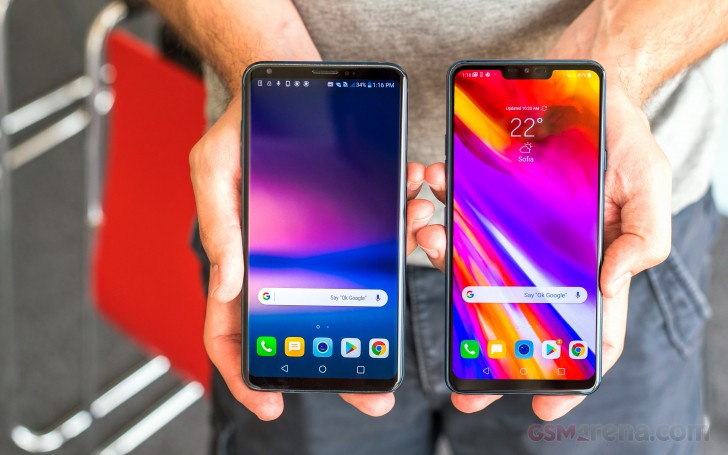 LG V30S ThinQ next to the LG G7 ThinQ

The G7 offers more than meets the eye, as we said, and it starts with the design. The phone is not only water-resistant but also MIL-STD compliant for shock resistance. Its magnesium frame has I-beam construction, which should dissipate any sudden shock from drops throughout the chassis. 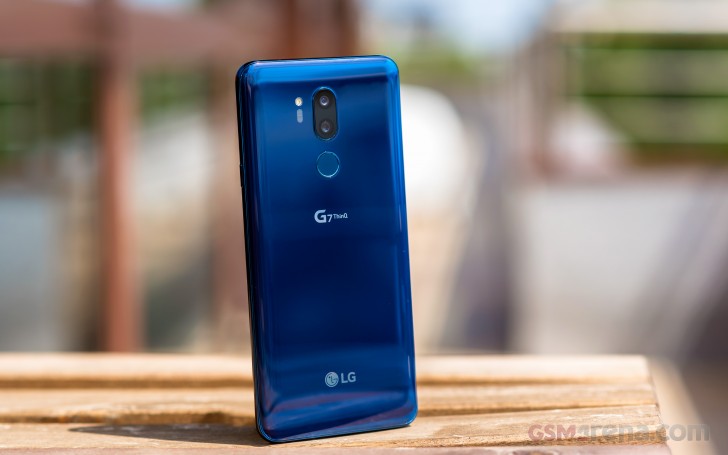 And the frame is much thinner on the G7 than it was on the G6. This year it's not flat with chamfered edges, instead it slightly curves towards the front and rear glass panels.

Having a display with a notch might be a first for LG, but it's one of the many on the market already. It's an ordinary-looking LCD screen but it a few things to show off.

For one, 19.5:9 is the tallest aspect ratio we've seen so far. Then there is a Gorilla Glass 5 to keep the screen safe (with an ever so slight 2.5D curve along the edge). And finally, it has RGBW pixel arrangement, which should allow it get very bright. 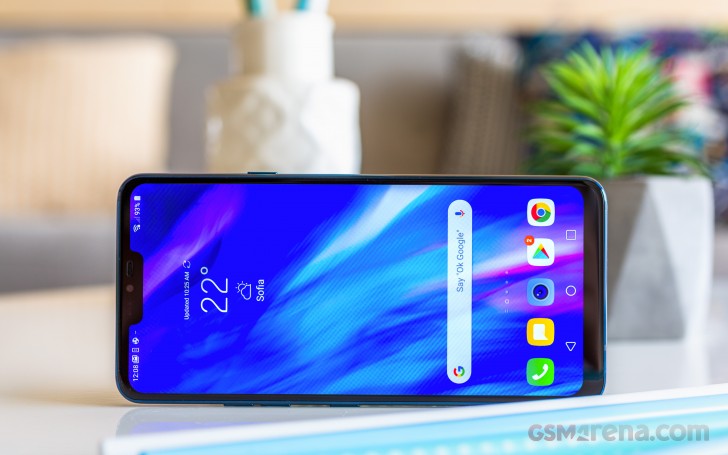 One thing that might be bothersome is the offset earpiece. The selfie camera is what rules the center of the notch, flanked by a couple of sensors and a blinking LED on the left, and the earpiece grille on the right. Those are just aesthetic nibbles - as far as usability is concerned - it works perfectly fine. 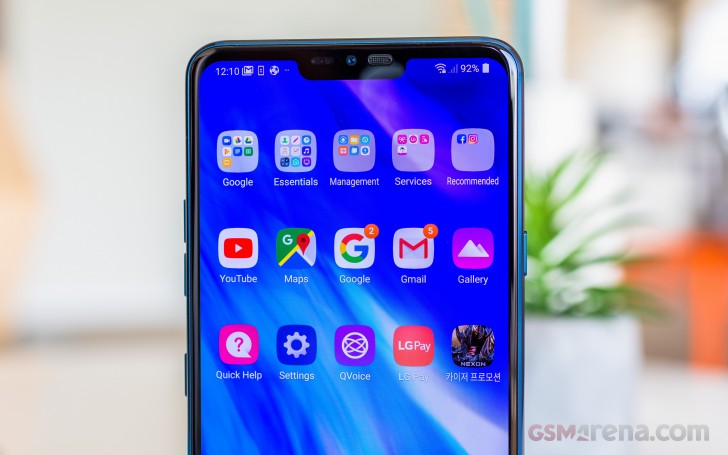 The back is made of a 4D-curved Gorilla Glass 5. This means a flush center and four curves towards each edge. This curvy shape is what makes the G7 look thinner than it actually is, and arguably - prettier. It may compromise the grip a bit, but it as a fair deal. 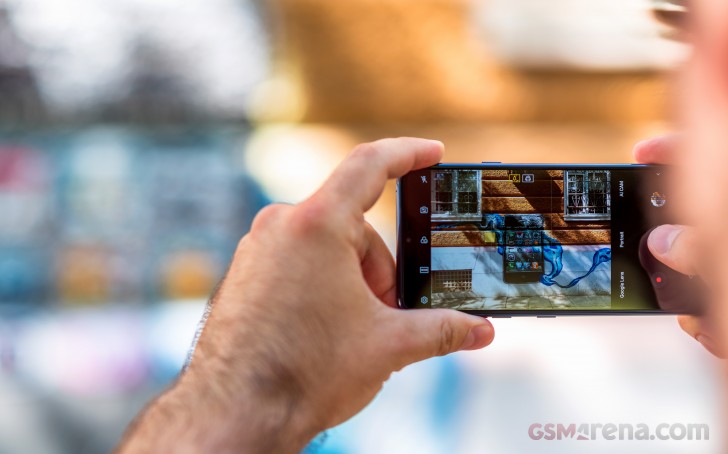 LG was the first to put the power button on the back of a smartphone with the LG G2 but it's now gone with the G7. For a change, LG has put the power key on the right-hand side. Only the fingerprint reader remains at the back.

The G7 features a new Boombox loudspeaker that sits behind the three-dotted grille at the bottom. But there is a lot more to it. LG uses the empty space in the G7's hull as a chamber to amplify the sound and promises room-filling loud audio. It surely sounded loud, but we are yet to test its loudness. We have high expectations though.

Unnecessary elsewhere, it's a must for the LG G7 - yes, we are talking about the audio jack, the latest victim of the smartphone "innovation." The G7 is among the few flagships to keep it alive, and even better - it connects to a high-end 32-bit Hi-Fi Quad DAC from ESS and is complete with DTS-X codec. The latter can simulate 7.1 surround sound - a first in a smartphone. 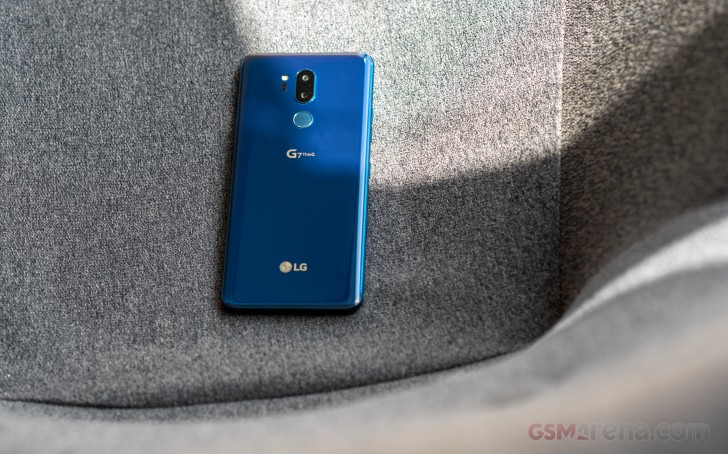 As we established, ThinQ means AI in LG speak and LG is dead serious into pushing this anyway it can. ThinQ has already made it to the phone's model name, but the G7 is also getting a dedicated hardware key on the left. It summons the Google Assistant, but if you hoped for an option to reassign its purpose - it's impossible, at least not yet. This may change later on, though.

And to make it really easy to summon and talk with the Assistant, LG has added a so-called super far-field voice recognition. The tech comes courtesy of the combo of a new chipset, a few mics, and Google's AI. The G7 can recognize your voice from up to 5 meters distance in noisy environments and launch Google's assistance in an instant. Indeed, the LG G7 looks a lot like its competitors. But it seems LG went above and beyond to make it better - the G7 has the sturdiest of glass builds, the loudest of speakers, the farthest sound capturing, the widest of cameras, and the audio jack is here to stay.

I have G7 Thinq. And i must say it is a wonderful phone however I have noticed a yellow tint on the bottom part of the screen. I don't if it is a defect or a nature of a lcd screen.