With so many flagship "plus ones" out there, it's refreshing to see something truly revolutionary. The LG G Flex is curved like a Beckham free kick and has a flexible screen and battery, along with a unique self-healing coating on the back. 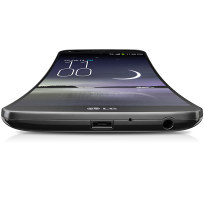 The LG G Flex is curved top to bottom and, as the name suggests, it can flex. It's not bendable like rubber, you have to really put some muscle to it. It's quite impressive all the same, as nothing about phones is flexible, not the screen glass, not the screen itself, nor the motherboard or battery. Oh well, they didn't use to be.

LG leaned on its component manufacturing skills and created a Plastic OLED (POLED) screen that's flexible (more so than the G Flex itself). The next step is a curved, flexible Lithium Polymer battery (a world first). Despite its odd shape and 8.7mm thickness of the phone, the battery has a respectable 3,500mAh capacity.

The screen measures the massive 6", but the curve of the device helps the ergonomics. While it impresses with size and flexibility, the screen has only 720p resolution (245ppi). Here's hoping that the new technology makes up for the lacking density.

While flexible screens and batteries might become more popular with wearable devices (say a smartwatch that wraps around your wrist), the next trick might become standard for all sorts of devices - the coating on the back can heal itself if scratched. This will put an end to all the silly cases and protectors that just make phones thick and ugly.

LG G Flex in our office

Beyond the breaking news, the LG G Flex is just the phablet version of the LG G2 with a Snapdragon 800 chipset, 13MP camera (no OIS though), Optimus UI gestures and updated multitasking (with a split-screen option). It even has the trademark hardware controls on the back. The Optimus G Pro is getting a little old and small and the LG Vu 3 is a niche product with its 4:3 screen, so another phablet is a welcome addition to LG's fleet.

The LG G Flex name will outlive the device itself - years from now we'll be covering flexible devices or ones with self-healing finish and we'll add "like the LG G Flex pioneered back in 2013". But we're not there yet, for now you can read more about the Flex's design and build on the next page.