LG Nexus 5 review: Back to the future

Back to the future

Other than the display at the front, there's a 1.3MP front-facing camera above it. As per tradition, there's also a notification LED light at the bottom. It pulsates when there's a missed call or a new message in 10-second intervals. Sadly, Android provides no out-of-the-box way to customize the duration, so you'll have to use third-party apps for that.

The left side of the LG Nexus 5 holds the volume rocker, while the right houses the Power/Lock key. All buttons are made of ceramic and feel extremely solid. A slight downside is that they can sometimes feel rough since their edges aren't perfectly smooth.

Below the Power/Lock key lies the micro-SIM card slot tray that's accessed via the provided pin tool. Using tools for accessing the SIM slot isn't ideal when you need to switch cards on the go, but luckily that's not something that happens too often.

The buttons on the Nexus 5 are made of ceramic

The top of the Nexus 5 is where you find the 3.5mm headphone jack and the secondary microphone. The microphone is used for active noise cancellation, but unfortunately it doesn't enable stereo sound recording out of box. You can enable that with a tweak if you are knowledgeable enough, but it's downright disappointing that you need to do that in the first place.

The 3.5mm headphone jack and secondary mic are on top

The bottom part is pleasantly designed with precision cut holes that sadly hold a single speaker and a microphone, rather than a stereo setup. It's located on the left to the microUSB port.

The bottom looks cool with the cutout grills

Finally, we come to the back, where the 8MP camera is heavily accented by the protruding and large protective glass cover. Below it sits the LED flash and a large Nexus logo joined by a smaller LG one below it.

The Nexus 5 carries a low price tag, but this shouldn't get you fooled into thinking it's a cheaply made smartphone. It's not and feels solidly built with its underrated minimalist design. The soft touch plastic at the back helps the grip quite a lot.

The 5" form-factor has reasonable operability with one hand, while pocketing the smartphone is rarely a problem either.

Under the soft touch back cover sits a 2,300mAh Li-Ion battery, which Google rates to last up to 17 hours of 3G talk time. Naturally, we run the Nexus 5 through our circle of battery endurance tests and it managed an endurance rating of 40 hours. You can find a full breakdown of how it did in our dedicated Nexus 5 battery life blog post. 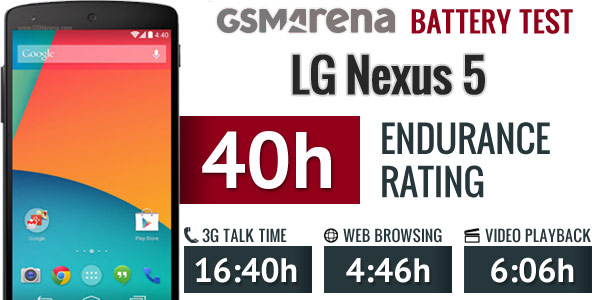 Update: The Nexus 5 was updated to Android 5.0 Lollipop, so we re-ran the battery test. You can find more details on how Lollipop affected battery life here. 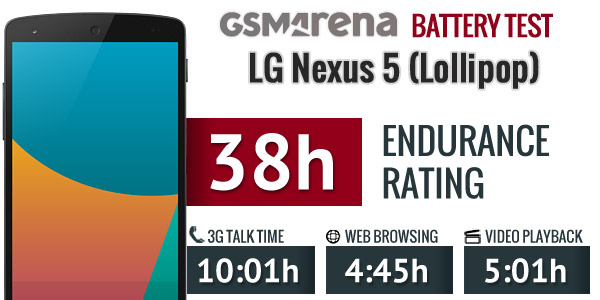 At the front of the Google Nexus 5 stands a 5" True HD IPS of Full HD resolution. In theory it should be a panel similar to the 5.2" one in the LG G2, although we found it to be slightly different and not just due to the different tuning.

The display is impressively sharp, thanks to the amazing pixel density of 445ppi. Here's what the screen looks like through the eye of our digital microscope: 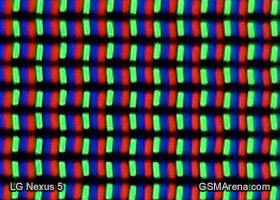 The color balance is quite good and slightly better than even what the G2 offered. Contrast is a lower though and so is saturation, which means some of the extra punchiness is gone. Those who favor more natural reproduction will certainly be happy with the Nexus 5 screen, though.


The overall screen reflectiveness is very low and the display is very bright. There is some contrast loss when you are viewing the screen at an angle, but it's minor and won't take away from the otherwise good picture quality.

Can i use this phone in 4G

Hey Guys I had 2 questions about this phone. I found one on ebay and was wondering is this the same phone as on this page? LG Nexus 5 D820 And also can anyone confirm if It plays pokemon go and uses the AR Capabilitys? I ask cause my Current Phone wh...