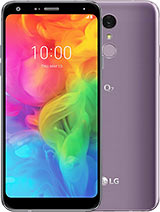 Im using the refubish q720k model' sold in Korea. For me its pretty good for mid range phones. The low light cam, sreen size, speed are all good. The bad side is the loud speaker

Performance is similiar to moto g7 power minus the battery and super amount of storage. The SD 450 and 632 are very similar. The back of the phone is made of plastic, the frame is made of aluminium and the screen is made of glass. If you get it then get a screen protector at the very least. You will get 50gb of usable internal storage but you will not get the option to use SD card as internal storage. Someone from france figured it out but people were rude to him so he deleted all his work which was very sad. Also this device is running a 32bit OS and a 64 bit Chipset. So you cannot play 64 bit games with it. Hope that helps.

I received this device as a gift Christmas 2018. It lasted till last April of this year.

My experience has been good (Ish). With my phone the charger port had difficulties connecting a year into use. I’d have to position it in certien ways to ensure it was charging.

The general life span for the battery of these phones are 2 years. I suppose I could have replaced it. But decided to give another device a chance.

It started draining quickly, and had problems recharging as expected from an older phone.

It was great at multitasking, the finger print piece makes it so nifty to unlock your phone. I enjoyed the phone for as long as it lasted.

Also, how's the build quality? Back/frame/front? Finally, what's the performance like on the Q7+?

Cilicium, 23 May 2020Does this phone have Android Pie (internationally)? I can't... moreYes, it got android pie several months ago. It ain't going to get android 10 though.

Anonymous, 07 May 2020Honestly this could've been a great phone with an amoled sc... moreThere a plenty of other options that are great mid range phones, this phone is meant to be in between an entry level phone and mid range, the chipset doesn't suck, it gets the job done and is a great starter phone.

There is one downside that the phone has a glossy plastic back that scratches easily and a phone case is a must.

It's a very good phone, and it takes a lot.

Anonymous, 13 Feb 2020Great phone i bought new for 130 euro. Cant complain about ... moreThe difference between the glass in the G2 and thd Q7 is the former is Gorilla Glass while the latter is not. Personally, this is what I look for if I want durable glass, as I do not know how durable it has to be to pass the MIL-STD-810G test (a quick search doesn't promise much either; searching for "MIL-STD-810G" I read the android central and übergizmo (I do not know this site to recommend it, even though I might have heard it before) articles)

Great phone i bought new for 130 euro. Cant complain about anything and works perfect. No 5g option i think is great. The glass dit crack with only a 10cm drop on stone tiles so i disagree with the MIL-STD-810G standard as my G2 was way stronger. Its a small crack in the right bottom on the glass part below the screen so it still works.

Only thing is the fingerprint sensor sometimes just refuses to accept and i need to enter my password.

But for this price i can not care about it. Would recommend if you seek a cheap good phone.

CPS Florida, 06 Dec 2019Go with another phone..... i've had this ohone for nearly ... moreYou definitely have installed a corrupted application somewhere which is creating the problem. Always download from Google play store

Have not been happy. Got the phone in May of 2019 for my 40th birthday present to myself. Cost $500 and it has not worked well. In July it was having SIM card issues. MetroPCS replaced with another one. Was fine but slow at times until this week December 20 2019. Same issue SIM card problems. it would cost me $50 to replace via Metro PCS 5 months after the original replacement. Going to go with Samsung next time. Have a very hard time finding accessories like cases for this phone. It was not a good buy.

Great mid range phone!!!Just received Android 9.0 here in Bosnia and Herzegovina.Great design and shape,protecting glass,metal frame,plastic back(case is a must for eventual scratches).Not to big,not to small,pocket friendly phone.Great and vivid screen,5,5 inches FULL HD+,FULL VISION with sharp colors.Great 13 MPX camera which takes great pictures,with auto focus,PDAF,Q lens.Great sound while listening music in headphones thanks to DTS X surround.Not to mention IP68 and MIL 810G which make us more secured in phones durrability.Enough internal storage for normal user and micro sd card support.Fast charging through USB-C and finger print sensor wich works great.It is worth every cent.I never had any kind of problems with this phone and I have been using it for a long time.

Same chipset as Stylo 4 & both function better than Stylo 5.

It is pretty good except the chipset. If it changes to a better chipset (at least mid-end, such as Snapdragon 650), it would be very nice for businessman. A phone with small body size, dual SIM, dedicated memory card slot, fingerprint, NFC, and other parts are at the mid-end, that is exactly what businessman looking for.