LG Q9 pops up on GeekBench, while a Q9 One gets Bluetooth certification

There has been no shortage of LG Q9 leaks over the past few months and as CES 2019 draws nearer, the Korean giant is clearly expected to unveil its work on the somewhat odd mid-ranger at the event. As for the "odd" bits, the LG Q9 actually has a few of those going for it. First and foremost has to be the dated Snapdragon 821 chipset that is said to power the device. 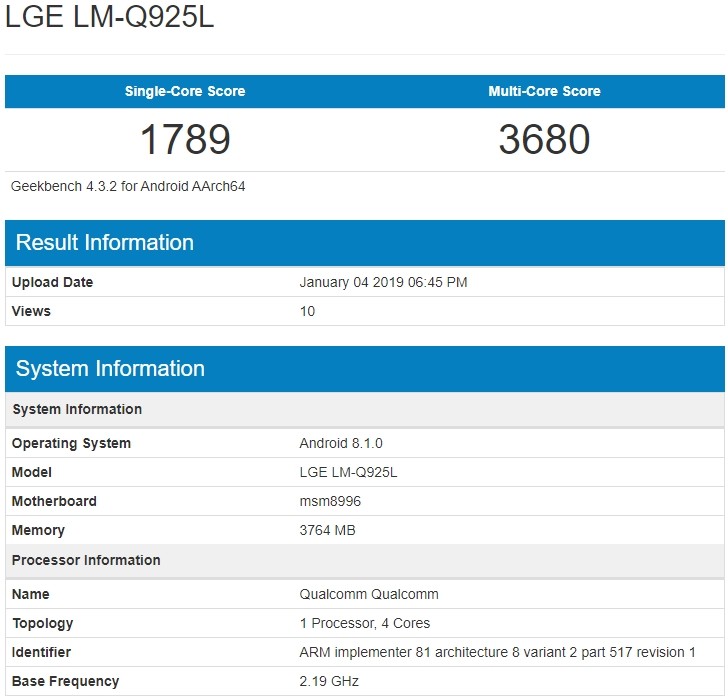 A new benchmark run from an "LGE LM-Q925L" unit on GeekBench pretty much confirms this rather unorthodox chipset choice. However, this has been the subject of speculation before. In fact, by most accounts, the LG Q9 is simply said to be a re-branded LG G7 Fit. That includes the internals, as well as the exterior design.

The LG Q9 will likely carry only two cameras - a 16MP on the rear and an 8MP on the front. It might also include a microSD expansion slot, IP68 and MIL-STD-810G certification, as well as a pretty solid connectivity load-out: Wi-Fi 802.11 a/b/g/n/ac dual-band, Bluetooth 5.0 Low Energy, GPS with A-GPS, GLONASS, BeiDou, NFC, USB Type-C port, and 4G VoLTE. You can actually check our hands-on impressions with the LG G7 Fit from IFA 2018 for more info.

The plot does, however, thicken a bit, since another similar LG mid-ranger is apparently also in the works. One likely to go by the name Q9 One, as detailed in a recent Netflix listing of devices certified for HD streaming, of all places. Said list also mentions the model number: LM-Q927L. Slightly different than the ones the other LG Q9 has been spotted under. 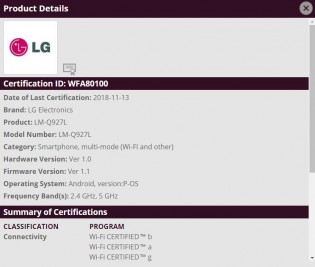 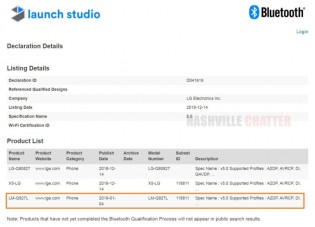 Apparently the LG Q9 One also recently got its certification on the Bluetooth SIG Certification site, under the same model number. A few month prior, the LM-Q927L stopped by the Wi-Fi Alliance as well. The interesting bit being that in both cases the device was listed as running Android 9 Pie. In contrast, most sources with info on the vanilla LG Q9 have mentioned Android 8.1 Oreo for the OS. Like the "One" moniker suggests, we could be looking at an Android One variant of the upcoming handset.

There is yet another potential spin to consider here, namely certain earlier rumors, regarding the LG Q9 that have listed a Snapdragon 660 chipset, often along with 3,550 mAh of battery capacity. Perhaps these two differences could pertain to the Q9 One? We'll just have to wait and see.

A few new press renders of the LG Q9 pop up

LG using old stock to get more profit, smart, if people buy without knowing or aren't tech enthustiasts. Same thing happened with the LG G6 carrying the same snapdragon 821 despite every manufacter incorporated the snapdragon 835. That made me ch...

Lol at the ignoramus berating the choice of soc. The 821 is superior to the 660 in everyway, including GPU performance. It may be two years old but it still is a superior performer compared to current midrangers. Better cpu, gpu, more l1 and ...

They would have been better off using the 710.