We should note that different regions get different deals. For example, LG is packaging a premium Bang & Olufsen headset, but that's limited to certain countries. The V20 itself is not officially available in many places, most notably Europe (a region starved for a flagship phablet, after Samsung's handling of the Note5 and Note7).

Bang & Olufsen headset we got with the LG V20

Huawei packed its own headset, which feels no less premium than that from B&O. You're also getting a microUSB to USB-C adapter, so you can continue using your existing chargers and cables. And we got a bumper case, which while practical, spoils the premium vibe of the phone. Initially, the Mate 9 was not available in the US but that changed in the beginning of 2017.

Both companies are including fast chargers with their devices, we'll get to the charging details of that later.

While LG did not officially bring the V20 to Europe, many local retailers did and the pricing is a tad self-contradictory. In Europe, the V20 is in the lower regions of €600 and the Mate 9 is in the upper regions. In India, where LG does officially distribute the V20, it is cheaper again by a small margin (less than 10%). In the US, the two change places - a shiny new Huawei is $600, while the LG is a whopping $800. That's too ambitious if you ask us.

Huawei took great pride in how much it managed to reduce the bezels on the Mate 9 - it fit a 5.9" screen in a footprint slightly smaller than the LG, which has a 5.7" main screen. The V20 is taller, in part due to the secondary screen above the main one, a trademark feature of the V-series. 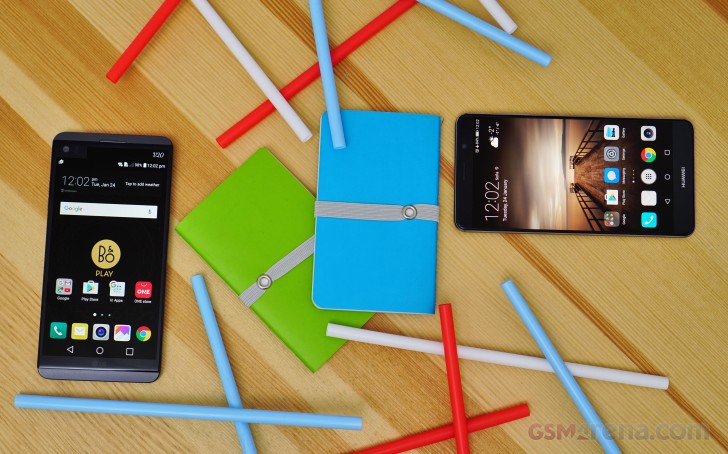 The battery is another place where Huawei managed to make the best of available room, its flagship sports a beefy 4,000mAh battery compared to the 3,200mAh fuel tank in the LG. That said, the Mate 9 is a bit thicker and quite a bit heavier - 190g is on the upper end of acceptable for a smartphone. The V20 weighs 174g, you may not think it's much but it definitely makes a difference.

A secondary screen is not the only hereditary trait of the V-series, a dual-camera is too. LG is the one that kicked off that craze first with the V10 and then the G5, but Huawei brought a brand name to the fight - its partner, Leica. This dual cam doesn't protrude from the back as much, but it helps that the Mate 9 is thicker.

The game of trump cards continues with audio, Huawei placed stereo speakers on the Mate 9, LG built 32-bit/192kHz Hi-Res audio into the V20 (with quad DACs to boot). These phones come with multiple microphones too - four for the Mate, three for the V20 (but the High AOP design allows them to record very loud sounds, up to 132dB). If you go to a concert, the LG V20 is the phone you want to record audio with.

The two flagships are not done trading blows and the LG has an advantage - a MIL-STD-810G transit drop compliance ensured by siloxane-polycarbonate, which is great at absorbing impacts. It's even more impressive that LG achieved this level of toughness and still managed to provide a removable back cover (giving you full access to the battery).

Both phones positioned their fingerprint readers on the back, LG was an early mover in this design trend. It's a necessity here, there just isn't enough room on the front!

Fingerprint readers on the back

Holding out your index finger near the fingerprint reader is a good idea anyway. These are large, fairly heavy phones and you need a good grip on them. Both companies have improved the handling of their phones from their predecessors. The LG V20 is surprisingly pleasant to hold (it helps that it's thinner) and so is the Huawei Mate 9 (it's thicker, true, but the rounded back distributes this beautifully).

We have to dock a few points off the V20 score sheet for its hardware buttons. The fingerprint reader (which doubles as a power key) is nearly flush with the back and hard to find by feel. The volume rocker on the side is small and low, not the easiest control to use. Huawei did much better in this regard, with a classic power button on the side (it and the volume rocker are thicker too).

Winner: Tie. These two are too different to call a clear winner. Many remain adamant they will not buy a phone with a sealed battery, others don’t care about that. The LG V20 is more practical (removable battery, shockproof) and lighter.

That said, Huawei managed to fit a larger screen in the same footprint and people tend to think it looks more “premium.”

Thank you for the good morals that you have. Can you help me to make the settings of my mobile main menu Persian? My mobile has a Chinese ROM and I can not work with more than this. I do not know English and it does not support it. It is interesting...

I have to laugh at how manufactures use trolls to lobby and make there their phones look better than the competition. I say look up costumer service reports first as well as "bugging ware" as in all your data sent to China every 72 hours where the ex...