As a new month begins, Google has updated its Android distribution chart. And in this State of Android report, Marshmallow finally manages to jump past the 1% market share hurdle. To be specific, it now stands at 1.2%.

That's obviously not impressive, given how many months have already passed since its official release (almost four, actually). Still, this is a milestone of sorts. And with updates to Android 6.0 now being out (or coming soon) to incredibly well selling devices such as Samsung's Galaxy S6 series (and the Note5), we assume this iteration of the OS will pick up the pace and reach a better position in the chart in the future. 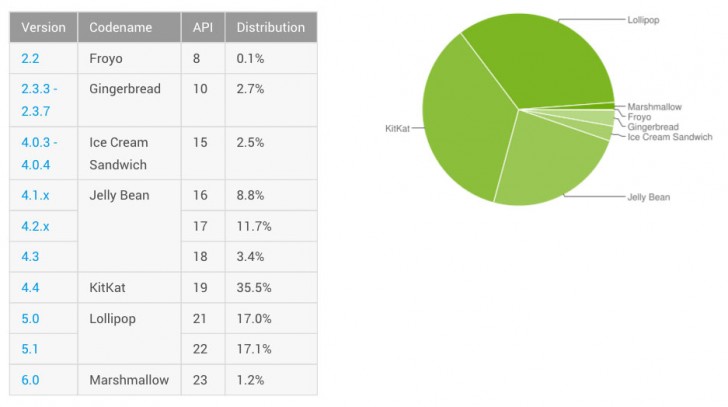 Lollipop sits at 34.1% of the pie at the moment, up from 32.6% last month and 29.5% in December. In fact it's close to catching KitKat, which has now dropped to 35.5%. The three versions called Jelly Bean are collectively at 23.9%, Ice Cream Sandwich has 2.5%, Gingerbread is at 2.7%, while Froyo still commends 0.1% of the market (though it's obviously on the way out and may not show its face in next month's report).

What a mess.... android is fragmented.... i switch to windows phone.... guaranteed OS updates for 3 years

What a mess! Android is fragemented. Good, I switch to ios, timely update and quality apps.