The update to Android 6.0.1 Marshmallow for Samsung's premier tablets from last year has finally reached the units that have been sold unlocked in the US.

The rollout for the 9.7-inch Galaxy Tab S2 began in April in Germany, while the update for the 8-inch Tab S2 started going out in the UK in May. In the meantime Verizon has updated its carrier-specific version of the Tab S2, and now it's time for those who bought one unlocked in the US to receive the Marshmallow bits too. This is happening regardless of which size you have, by the way. 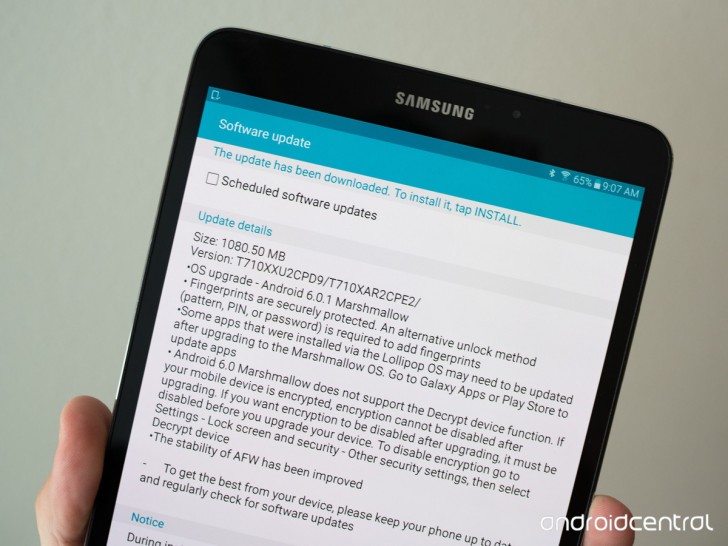 When you receive the coveted update notification, you'll need to download a 1GB file, and after you apply the new software you'll be on firmware version XXU2CPD9. If you don't want to wait, you can check for the update manually in Settings > About device > Software update.

The new release brings with it everything that's changed in Marshmallow, of course, things such as Doze Mode, App Standby, Google Now On Tap, a new permissions system, and a variety of other improvements here and there. You should also expect to find new stuff in Samsung's own apps, including the option to add images in S Memo.

Got my Samsung Tab s2 9.7 update to Marshmallow but after updating i cant use my bookcover bluetooth keyboard can somebody help me.

Upgraded to 6.0.1 about 2 weeks ago and now I'm unable to use Gmail, Voice, or Chrome unless the device is plugged into AC power. Samsung tech support was no help at all.

What about Galaxy Tab 4??