Huawei’s journey West marks a record-breaking success – the Huawei Mate 10 Pro surpassed the pre-order target by over 100%. Huawei says it broke all records for smartphone pre-orders in Western Europe.

The Mate 10 Pro was unveiled on October 16 and sales in the UK began a month later at a price of £770 or so, though it has fallen to £700 since. And in that month, people flocked to the new flagship in record numbers. 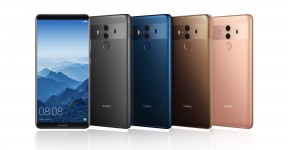 The phone is also available in China and is coming soon to other regions. Huawei is yet to announce US availability, though it can't be far now.

The Huawei Mate 10 Pro now on sale in the UK

Here in the UK the default option is 6 gig of ram and 128 gig storage at 699. As for headphones i've been wireless for the last 4 years even for pc gaming, so no 3.5mm jack is no problem. In around 3 years you will struggle to find a headphone ja...