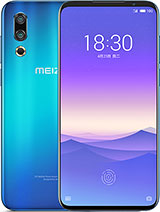 additional, 48mp camera is a joke, selfie is imposible on night, top menu always on when
talking phone and alot bugs.

I m owning this after the previous 16th which I loved the most for it lightweight and its look . I have found the 16rh very very good under all aspects(I'm OnePlus user the most) not perfect but so good,even the software. I thought the 16s wasn't a big upgrade but after used for a day I can say it is a huge upgrade : less bezels,10 more grams. It's definitely quicker (I can compare it with op7) ,the battery backup is faboulos,the speakers sound as a hell,camera is still great even tho I don't use it that much. Paid 230 128gb and with the NFC is a real bargain. I recommend it for those who want a fantastic and different phone and brand. It doesn't miss anything

New_Canadian, 03 Feb 2020Bought it while reading some recommendations about its supe... moreSoftware is the only issue for Meizu phones. My Honor View 10 released on Dec, 2017 received Android 10 last week. The View 10 arrived with Android Oreo, then got updated to Pie and finally to Android 10.

My Meizu 16th (Meizu 16 in China) arrived on Aug, 2018 with Android Oreo. In 2020 it is still in Android Oreo. I do not face any major issues with my 16th but none the less their are some small niggling software issues.

However the product quality of my 16th minus the software is way superior than my View 10. The 16th have 3.5mm headphone and the audio quality is far superior than other phones far few like LG V30+ or Vivo NEX S.

Bought it while reading some recommendations about its superior built quality. On the other hand, I'm disappointed with its software Flyme. It's unstable, sometimes unresponsive and locked. Just terrible. There's no way to modify it.
It's missing 3.5 mm jack and that's a huge minus. Because of its terrible software and lack of 3.5 mm jack, it's my first and last Meizu phone. Never again Meizu.

Unfortunately, one of the most under rated performance phone

1) Meizu's economic condition had been gloomy for the fast few years and hence they are looking at other options to cash in more money. One very effective way as proven by Apple is to remove the 3.5 mm headphone jack and force their smartphone owners to buy an additional USB Type-C to 3.5 mm audio dongle. Hence, Meizu had made their own audio dongle and wants 16s owners to cash in extra money along with the phone for this dongle. Also no cheap after market dongles will do as 16s outputs pure digital signal through its USB port. You need to buy an expensive dongle like the one made available by by Meizu which will have the audio DAC chip built in.

2) The latest trend in the smartphone industry is to add some kind a splash proof & dust resistance in the phone. Their is a huge marketing side of this feature. Meizu knows they do not have the budget to go the whole way for expensive water resistance certifications like IP68 which are generally performed by smartphone leaders. For Meizu removing the 3.5 audio jack reduces the engineering & development cost a whole lot to easily achieve P2i splash & dust resistance standards. Mind you my LG V30+ has a 3.5 mm audio jack, and still comes with much higher IP68 water resistance standards. The difference is LG have the development budget to achieve IP68 on its flagship phone, Meizu simply doesn't have that amount of cash.

3) One of the main reasons why people buy Meizu phones are aesthetics. And the core design aesthetic of any Meizu phone is symmetrical design philosophy. However their phones are also known to be very compact and slim. While on the positive side all these greatly contribute to the in-hand feel and look of the device, the negative side is it leaves and very small place inside the phone for the battery. Hence their previous Meizu flagships like Meizu 16th (Meizu 16 in China) always have smaller battery in comparison to their direct competitors like OnePlus 6T. So what Meizu did with 16th latest successor, the 16s is to create a main PCB board which is very compact. The best way to do so is to put the back camera sensors on a upper left or right corner of the phone like in 16s rather than in the middle like in 16th, and also reduce the sub-PCB board area by eliminating the 3.5 mm audio jack while keeping the mandatory USB port & bottom firing speakers. All this modifications compounded with a millimeter of additional height & width of 16s & also increase in thickness compared to 16th resulted in a much bigger battery space inside the phone. Meizu 16th battery of 3,010 mAh soared to 3,600 mAh in 16s. While this are all good for the battery backup perspective, on 16s we loose the very important & loved 3.5 mm audio jack and of-course the long held and revered Meizu symmetrical design due to different rear camera placement.

I have seen both 16th & 16s and 16th is undoubtedly aesthetically more pleasing. Period.

Also the glaring omission of 3.5 mm audio jack by Meizu finally forced me to buy the heavily discounted Meizu 16th over the newer 16s. I must admit I am very satisfied with my 16th.

I asked flyme 8 for 16S, the answer "Sorry that we don't have confirmed information about new update by now. Please wait patiently and visit our official website for further information"

sincereye, 20 Sep 2019Beautiful Flyme ui and great phone. I have been using 16s f... moreBruh you've traveled through time or something because that ain't how it works.

sincereye, 20 Sep 2019Beautiful Flyme ui and great phone. I have been using 16s f... moreThe phone was launched on April this year....

Beautiful Flyme ui and great phone. I have been using 16s for a year.

CompactPhones5ever, 28 Aug 2019Not sure about the Flyme OS and other aspects of the phone,... moreI honk people have managed to unlock this phone’s bootloader, so if you’re into stuff like that, you can install a custom rom!

without notch and awesome model

Not sure about the Flyme OS and other aspects of the phone, but hot damn the design of the front is beautiful, if only more phones adapted this design instead of all these notches and pop-up cams.

Koko, 15 May 2019Currently owning the 16th which is still the best looking s... moreS10e? I disliked its display calibration very much in comparison to the 16th.