The Meizu 16s had another go at AnTuTu and this time it posted a higher score, making it one of the best-performing Androids. There’s about a 5% improvement since last time, which suggests the team is still working on the software for the phone. 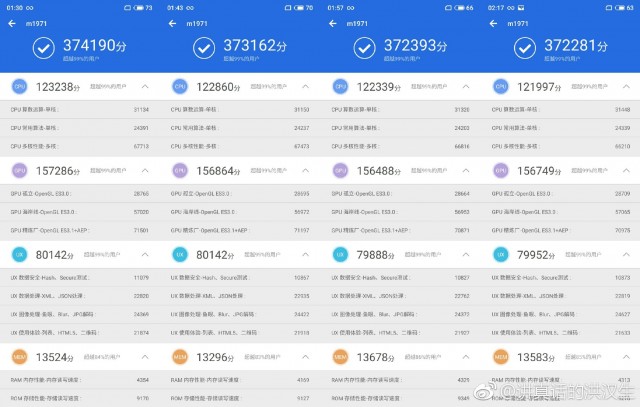 What’s interesting is that the new score was posted by Hong Hansheng, who is a system engineer at Meizu. He posted several runs too, the phone shows fairly consistent performance (we picked the top score, just as we do for our own benchmarks).

Here’s how it compares to other devices with Snapdragon 855, Kirin 980, Exynos 9820, as well as Apple’s latest chipset. Note that we included two phones that are yet to be released (the Zenfone 6 and Reno 10x zoom).

The phone is expected to have the roughly same design as the Meizu 16, though the screen goes from 18:9 to 18.6:9, suggesting there might be some changes (the resolution is 1080p+ in both cases). The screen diagonal will go from 6.0” to 6.2”, but 3D renders show no notch. Benchmarks have revealed 6GB of RAM and 128GB storage, plus Pie-based Flyme 7 software.

The Meizu 16 Pro is expected to upgrade to a 48MP Sony sensor with OIS. TENAA confirmed this and a few other specs. The phone could be announced in April or May (no official word on that).

Well person who relly on theses testings really needs a rest because is tired hunting easter rabbits and eggs.

Agreed, though I think Android One is a bit too barebones. Maybe add some useful features as well