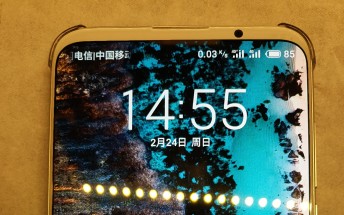 Meizu 16s is closer to a launch and the device finally appeared on AnTuTu. The phone reached an impressive score of 357,975 and the listing revealed the result was achieved by a Snapdragon-855 powered unit with 6 GB RAM and 128 GB storage.

The new Meizu 16s is expected to look a lot like the Meizu 16, but with thinner top and bottom bezels. It will have a tall screen and Full HD+ resolution - 18.6:9 ration and 2232 x 1080 pixels. Unsurprisingly, there will be Android Pie, but we expect Flyme 7 on top.

The result of almost 358,000 is match for the Lenovo Z5 Pro GT, Xiaomi Mi 9 and other flagships. The number is a sum of four key components - CPU, GPU, UX and memory, and given the Meizu 16s has only 6 GB RAM, we hope it can reach even better performance with more memory on board.

We are yet to see how would it actually perform in real life, but we hope we won't have to wait long for that.

Besides, on a worldwide scale, they're not as well known as compared to other brands, which can have some effect on the frequency regarding software updates, so there's that too

Phones already contain malware and spyware preinstalled, so they sell my data all the time, that should be more than enough to get solid 10 years support for a phone. I will not support any kind of retarded tactics to make me pay more.

You get what you pay for, so there's no point complaining. If you want a phone that will updated regularly, you need to pump up more money. Or buy a used iPhone from last year or two years ago which will perform the same or even better than any and...