Pro in a smartphone's name implies bigger and better - so much so that it's even been abused to fool the unsuspecting. Meizu did not resort to such trickery though and their MX4 Pro takes things up more than just a notch from the stock version.

An updated chipset and 3GB of RAM, a higher-res front cam, bigger screen and a fingerprint scanner are more than enough for the MX4 Pro to earn its stripes. But Meizu didn't stop there. They have the highest resolution screen on a mobile phone / phablet: 1536 x 2560px is between QHD (LG G3, Oppo Find 7 and the likes) and WQXGA (Samsung's S and Pro tablet series, the Kindle Fire HDX 8.9).

Not least, the Meizu MX4 Pro almost managed to keep the impressive screen-to-body ratio of the stock MX4. The hardware Home button / fingerprint scanner obviously needed more space below the screen and it's probably the only reason why the Pro failed to match its sibling's 75.5% screen-to-body ratio. At 73.7%, it's close enough though. 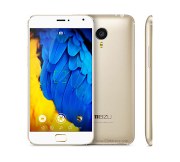 The octa-core processor marks a change of allegiance from MediaTek back to Exynos and RAM has been bumped to 3GB. The selfie camera is a 5MP unit over the 2MP front-facer of the Meizu MX4. The battery capacity has seen an upgrade as well. We'll soon find out whether it's enough considering the outrageously pixel-rich screen. Let's get things going with a look at the Meizu MX4 Pro's key specs.

Last season, fingerprint scanning was a feature no device with flagship aspirations could afford to omit. Meizu is jumping on the bandwagon as well. On the other hand, QHD screens were not as pervasive, most major players carefully weighing up the pros and cons. LG G3's announcement made a big splash but the real-life battery numbers were discouraging. Still, devices like the Oppo Find 7, Motorola Turbo, Samsung Note 4 and the Nexus 6 followed suit.

Now that even Sony is having a change of mind, if rumors of a QHD Xperia Z4 are to be trusted, QHD screen resolution will be the flagship grade for the next generation. The Samsung Galaxy S6 and the next HTC One are expected to rock QHD displays too.

Meizu is outing its first QHD+ screen in the off-season but the timing could turn out just right. Plus, beating the likes of Sony and HTC is certainly something to be pleased with. What's more, the Chinese are making that little extra step. 96 pixels of extra vertical resolution may not be much but it means they don't have to share the top spot with anyone. Screen bezels as slim as 2.8mm are cool too.

Even at launch, the Meizu MX4 Pro naturally commands a lower price compared to some of its direct rivals but that shouldn't be the main reason to check it out. Meizu's phablet looks impressive on paper and if it can deliver the expected real-life performance, users will be more than pleased. Battery life and benchmarks will certainly be watched closely - but not before we've looked at the build and bundle. Let's get to it.

Any hint what to do? Sometimes wlan AND bluetooth don't work at all. While searching, phone is getting hot an hotter. Sometimes wlan and bluetooth start working correctly (often after battery was empty) Very frustrating, although a great phone ..... ...