Meizu's upcoming Pro 6s smartphone has now been spotted on AnTuTu, revealing some of its key specifications. The benchmark listing reveals that the device is powered by Helio X25 chipset, something which Meizu's VP Li Nan hinted recently. 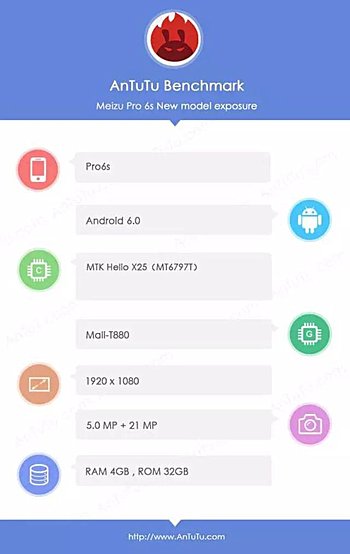 As for other specs, the AnTuTu listing reveals the device sports a full HD display, has 4GB/32GB memory configuration, and features a 21MP/5MP camera combo. It runs Android 6.0 Marshmallow out of the box.

The phone is set to be unveiled on November 3, which is Thursday next week.

Meizu build quality is very premium ... but the internal storage should be 64GB.... perfect software customization for the hardware they used...

They should just merge and call themselves MeizuTek, get it over with already.

May be considered as good one if there is 64gb inbuit storage,good software customisation, regular updates along with security improvements dont forget a good hardware will just be a electronic waste without a good software