Now here's a surprise for you – Meizu just posted about a last minute "major event" that will be held on the 19th (this Saturday). It was tagged with "Something big happens" but little else about the event has been unveiled.

There are three numbers on the teaser image – 900, 8,000 and 35,000. There's a T-shirt behind the 900 so maybe attendees will score some Meizu merchandise, but the other two numbers are above question marks. 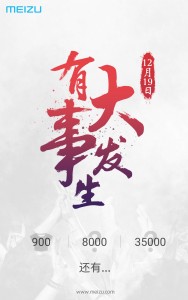 Teaser image for the December 19 event

Anyway, Meizu's Vice President has already ruled out the Meizu PRO 5 Mini, saying the handset will be unveiled early next year. What then? Perhaps the Meizu metal mini, which passed through GFXBench yesterday. There's also Flyme 5, but the recently scheduled rollout will be before February 8, the Chinese New Year.

So what for was this meeting?

Maybe for you but not in general. The specs are mid range at best.