A new leak from China today claims to show us Meizu's smartphone launch roadmap for 2017. The image you can see below is said to depict an internal document from the Chinese company, neatly detailing every single smartphone it plans to launch next year, along with the month of its introduction and the chipset used.

So let's dive in. The first announcement is coming in February, when the M5S is reportedly coming, powered by MediaTek's MT6753 SoC. The M5 has the MT6750, so this isn't surprising. 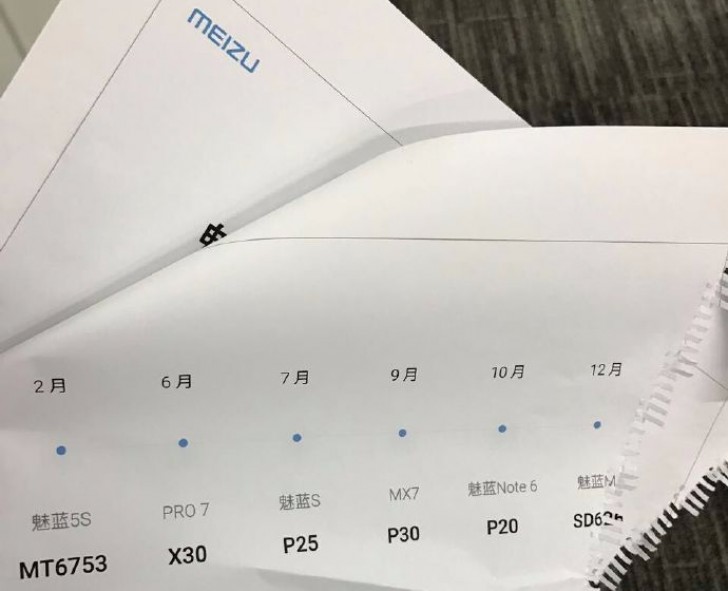 Next up, in June the Meizu Pro 7 will arrive with the Helio X30 chip on board. Then in July the Blue Charm S (or MS) will be launched sporting the Helio P25. In September we'll get the MX7 with a Helio P30, while the M6 Note (or Blue Charm Note 6) lands in October with a Helio P20. Finally, in December of next year Meizu will announce a new member of the Blue Charm / M series, which will be powered by Qualcomm's Snapdragon 626 chipset.

Obviously take all of this with a pinch of salt until other rumors confirm any of it, but the contents of this roadmap certainly feel believable enough, given Meizu's past antics. The one surprise is the use of that Qualcomm SoC in late 2017, which if true signifies that the two companies have finally agreed on a settlement for the chip maker's patent infringement claims against Meizu. We assume that the Chinese company has negotiated (or is in the process of doing so) a license agreement with Qualcomm, which means we may see even more Snapdragon chips inside its smartphones from 2018 onwards.

Qualcomm files patent infringement complaints against Meizu in the US, Germany, and France

Moto not so much, the rest I agree with.

if Meizu is overpriced, I'd like to hear your opinions about apple, samsung, LG, moto, HTC...