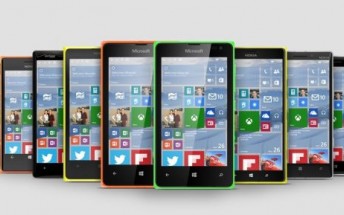 Last year Microsoft finally confirmed that Windows Phone is dead, but even after that point it still sold some such devices through its official online store. Not anymore, though.

Today there are zero Windows Phones in stock at the Microsoft Store, and we assume the company isn't going to replenish those stocks. So it's yet another good opportunity to bid farewell to Microsoft's Windows Phone experiment, now that you can't even purchase the HP Elite x3 for $299, alcatel Idol 4s for $99.99, or the Idol 4s with VR goggles in a bundle for $169.

We assume it took this long for the stocks to be depleted because in spite of the severe price cuts not a lot of people were buying these. Obviously though, physical Microsoft Stores might still have some Windows Phones in stock if you're feeling adventurous. And there are always third party distributors, that may be sitting on a bunch of unsold handsets running what was once said to become 'the third option' for smartphones, alongside Android and iOS.

References to the mythical Microsoft Surface Phone creep up once again

I'm still using my Nokia 1020 for photography and it's still going strooonngg.. Runs smooth and isn't laggy, like, at all!