Back in 2009 and 2010, many rumors told us Microsoft was working on a folding tablet called Courier. In the end, that never saw the light of day, and Apple's iPads became the kings of that market.

Intriguingly though, Microsoft is now said to be developing another device that is similar, at least in concept, to the canceled Courier. It's codenamed Andromeda, and will be a folding tablet that will run Windows 10 on ARM. 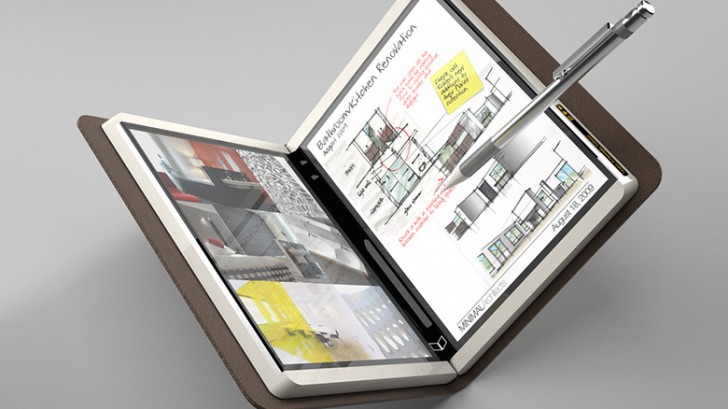 It will come with telephony capabilities, but won't be a smartphone - although, when folded, it's allegedly "pocketable". That said, the main selling points of this device will be centered around pen input and inking. For example, there's a notebook app built-in that mimics writing in a real notebook, with virtual pages spreading across the foldable device.

Expect to see the latest Snapdragon SoC powering Andromeda. Microsoft will not position this against any Android or iOS-running competitors, but instead it will try to create its own niche. A 'digital journal' is what it may be called. The company has in fact already admitted that if it ever makes a mobile product again, it will be a new kind of device, and not a smartphone. All of that fits perfectly with what we're now hearing about Andromeda.

It could be Surface-branded when (or if) it launches, something like Surface Note or Surface Journal. Microsoft's hardware partners might choose to create similar devices if it takes off, but this is just speculation for now. Unfortunately no specs have leaked for Andromeda yet, so we don't even know if it will have one folding screen or two separate displays separated by a hinge.

Anyway, if it is to ever become reality, don't expect Andromeda in stores earlier than next year.

Lumia 950 / Mobile 10 is basically a brilliant, straight-forward machine - such a pity that MS didn't persevere and develop the range effectively. I'll use mine for as long as the fading battery can keep things going. Painful the think about its repl...

I consider myself to be a loyal Microsoft user and unlike other "fans" I'm still using my Lumia 950 and will continue to do so until it fails, or until the new devices appear. The trouble is everybody keeps thinking that if they don't sell as m...

For some reason they remind me of Nokia. Was such a power company and leader in its class but never changed and developed when new technology was out and stagnated and stuck to their old ways looking for answers that would never come. Windows phone...