Microsoft announced the Lumia 640 Dual SIM and Lumia 640 XL Dual SIM models at the MWC 2015. Both devices are powered by Windows Phone 8.1 with Lumia Denim update. . 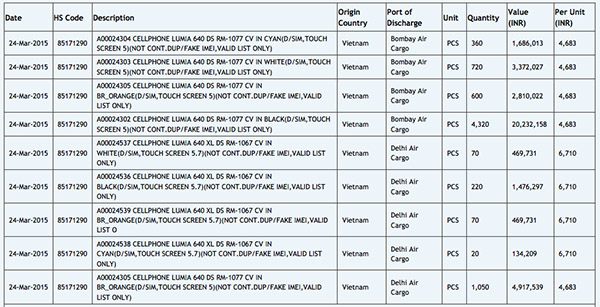 The Microsoft Lumia 640 is a refresh to the 6 series and sports a 5-inch IPS ClearBlack display with 720p resolution and built with Corning Gorilla Glass 3 technology for protection.

Powered by a quad-core Qualcomm Snapdragon 400 mobile with 1 GB RAM, the Lumia 640 offers 8 GB on-board storage, which is expandable by up to 128 GB microSD cards. It has a 8MP snapper at the back with LED flash and 1MP front facing camera. This dual-SIM version packs a 2,500 mAh battery but we do not know whether the 3G only or 4G supporting Dual SIM version is being imported for India.

The Lumia 640 XL features a large 5.7-inch IPS ClearBlack display with 720p resolution and made with Corning Gorilla Glass 3 technology for protection. It is powered by the same quad-core Qualcomm Snapdragon 400 chipset, 1 GB RAM and offers 8 GB of onboard storage.

Microsoft is yet to formally announce both Lumia 640 and Lumia 640 XL in India. Based on the import data, we expect the announcement to come soon, though.

Ready for the phone as it will take me from old style of living to the technology style of living, whether in cash or contract - come Lumia 640 XL. Hola dah.

I purched one Luia 640 via Flipcart...around Indian Rs around 12500/-. The problem is hw to trasfer data . My old mob is android tech. I exported my data in the SD card .vcf and try to import in lumia . bt nt supporting. my quary is hw totransfer dat...