The Surface line ventured close to laptop territory with the Surface Book, but now Microsoft made a true laptop. The Surface Laptop promises a non-detachable 13.5” PixelSense display with touch and stylus support. It's a 3:2 screen with 2,256 x 1,504px resolution (201ppi). 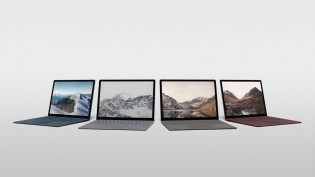 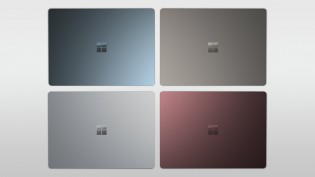 Curiously, the backlit keyboard is covered in Alcantara, a suede-like material. It will be available in Platinum, Burgundy, Cobalt Blue and Graphite Gold. The whole thing should weigh just 1.25kg (2.76lbs) and measure 14.5mm at its thickest point (and 9.9mm at its thinnest).

Despite these highly portable dimensions, the Laptop promises 14.5 hours of Netflix binging before its battery runs out. Surface chief Panos Panay says the new portable computer is faster than a MacBook Pro but lighter than a MacBook Air. 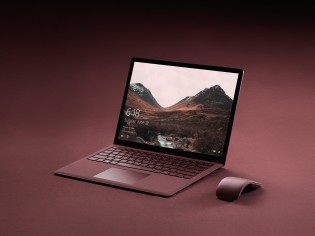 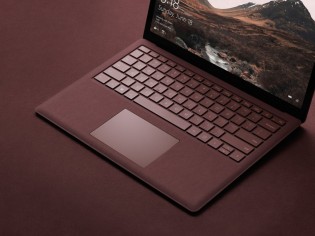 A closer look at the Burgundy version • Note the Alcantara keyboard

The Microsoft Surface Laptop will run Windows 10 S, Microsoft's education-oriented OS. Configurations start at $999 and you get a choice of Intel Core i5 or i7 processors and up to 512GB of SSD storage.

Microsoft managed to fit a sinular full size USB 3.0 Port, a mini DisplayPort, though there’s no USB-C to be seen. There’s a proprietary Surface port on the right and nothing on the back.

I made the point of the Surface Pro because it was the device that truly positioned them as Reference hardware.... and it has been the 2-in-1 device to compare ever since it came out.... Innovation can come from many angles, not only the inclusion of...

Lol, "innovation has been more present with the Surface Pro 4..." If you consider an incremental upgrade to be some form of innovation, you might as well just say that Apple's iPhone 5S has been a innovation over the iPhone 5. And once again, where i...

Yes but you will still have full rights to distribute it how you see. It's just the people that create the most problems for the OS would never have their apps signed so the OS would never run them to begin with. Developers just need their tools an...