Microsoft unveils Teams, its Slack competitor that lives inside Office 365

It's getting pretty crowded in the services that let you stay connected to your coworkers space lately. Following Facebook's launch of Workplace, today Microsoft has finally unveiled Teams, its oft-rumored Slack competitor.

Unlike Facebook Workplace or Slack, not anyone can simply sign up and use Microsoft Teams. The service is only being offered to commercial customers that have Office 365 Business or Enterprise plans. Teams is out today in preview form, accessible in 181 countries and 18 languages. General availability is expected in the first quarter of 2017. 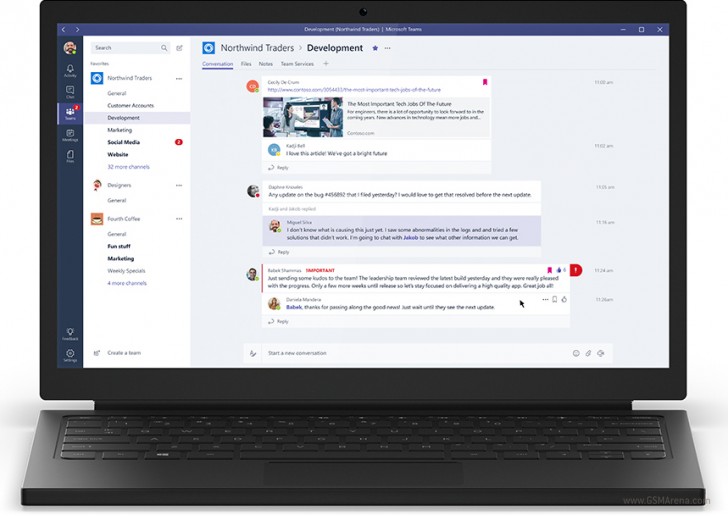 Since it's a part of Office 365, Teams is unsurprisingly heavily integrated with the Office apps: Word, Excel, PowerPoint, SharePoint, OneNote, Planner, Power BI, and Delve. The service has persistent and threaded chats, and it supports both public and private discussions. With Skype built-in, you can easily participate in audio and video conferences. Teams even supports emojis, GIFs, and custom memes.

The Microsoft Bot framework is fully supported in Teams, and the app also has the Connector model of Exchange, providing notifications and updates from third-party services such as Twitter and GitHub. Microsoft wants you to know Teams is very secure. The company says data is encrypted "in transit and at rest", and Microsoft itself has no access to customer data. Teams is available on the web, but also through apps for Windows, Mac, Android, and iOS.

wish its available for outlook.com customers for FREE

Microsoft need to hire me