Mobiado Grand 350 Pioneer is made out of a meteorite

The Mobiado Grand 350 Pioneer is designed in honor of the Pioneer 10 probe, which became the first man-made object to pass the asteroid belt. Therefore, it's natural to make the phone out of a real meteorite (the back cover anyway).

A meteorite surely tops all the mundane materials such as gold, leather and wood that we've seen on luxurious mobile phones - and we've seen our share of those. 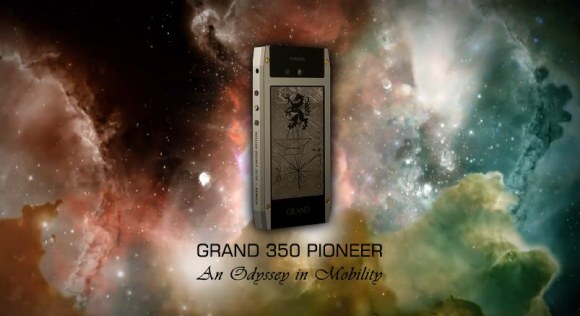 Usually ultra expensive phones come with entry-level functionality. The Mobiado Grand 350 Pioneer however is actually very well equipped. It has a QWERTY keyboard, quad-band GSM, dual-band 3G with HSDPA, Wi-Fi and integrated GPS. The QVGA screen has a 2.36" diagonal and displays up to 16M colors.

The weight of 217 grams might be a problem though. The dimensions, however, are quite reasonable - 114.1 mm x 57.4 mm x 12.1 mm. The materials used to manufacture the 350 Pioneer (besides the meteorite, of course) include lavish use of "spacecraft aluminum" and ruby and sapphire. There's also a goatskin leather carrying pouch included in the retail package (somebody hear animal rights activists roar with disgust?). 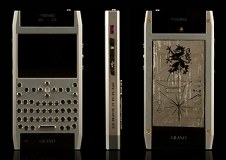 The Mobiado Grand 350 Pioneer is dedicated to the Pioneer 10 probe, which launched 37 years ago. A total of 37 phones were made to celebrate each of those years. Buyers will find the limited edition number engraved the right side of the phone, while on the left side you can see the exact time of the launch of the probe from Cape Canaveral. The infamous Pioneer plaque is engraved on the back of the Grand 350, with a Mobiado twist. 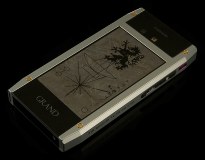 It comes from a planet inhabited by dragons! • Widmanstatten patterns on a meteorite

And just to give you a little background on the meteorite used for the back panel - the Gibeon meteorite was discovered in Namibia by an English captain named J. E. Alexander in 1836. Herschel confirmed that the rocks were from outer space. Scientists even traced the meteorite's origins to the Jupiter's asteroid belt, making the choice quite fitting indeed.

You should also know that when entering the Earth's atmosphere, the meteorite broke up into numerous pieces spread over hundreds of kilometers, so Mobiado didn't rob a museum or anything to get a piece for their 37 Mobiado Grand 350 Pioneers.

The interesting part is that the meteorite composition (90% iron, 8% nickel and traces of cobalt and phosphorus) is the reason for the formation of a special pattern on its surface called Widmanstatten figures. The same figures are clearly visible on the back of the Mobiado Grand 350 Pioneer as well. And when you geeks, stop drooling over it, remember it's only a simple luxurious phone we're speaking about here, not some tech fare prize winning stuff - so get yourself together.

yeah but, how much does it cost?

obviously it's running symbian. it even has QVGA screen, 16mill color screen. it's a frigging E71 alrite. with expensive, but weird looking suit.