Moto G4 Plus review: Tuned up

AOSP with a dash of Moto

Software is another area in which Motorola has managed to keep to its roots throughout multiple generations now and despite the multiple changes in management. If a stock Android experience is what you are after and the latest Nexus or should we say Pixel, given the latest developments, isn't to your taste or possibly your spending budget, then Moto's phones are the ones to turn to. 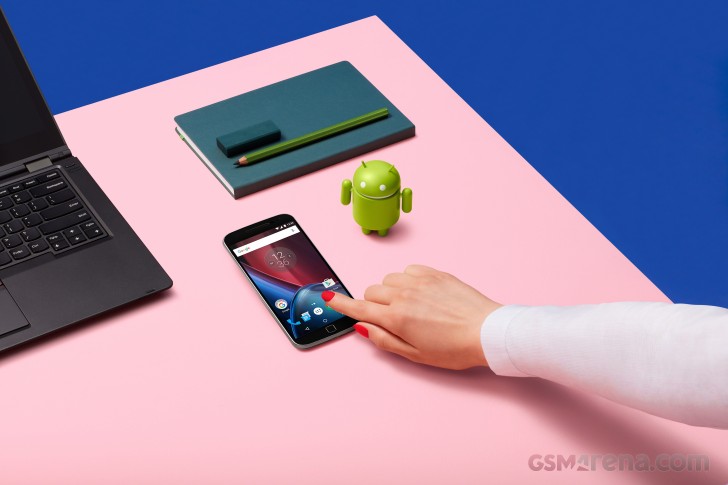 Just like its generic sibling, the Moto G4 Plus does not disappoint in this department and you get a mostly vanilla ROM, Android 6.0.1 Marshmallow non the less. The software is some of the purest Android this side of the Nexus line and with remarkably little bloatware. We say Nexus as the Google Now launcher is still the norm. Google seems to be keeping the new Pixel styling and remodeled interactions away from AOSP and confined to the Pixel launcher. At least for now, that is.

However, there is still a minimum amount of custom code to note. The camera app, for one, is custom, but it brings a few extra features on top of the usual Google Camera, so we don't mind the upgrade. The rest of the pre-installed apps include Google Play Music, Google Photos, Google Hangouts, you get the idea - all stock Android software.

There's also the Moto app, which is a simple configuration screen. It can set up the Active Display - turn it on or off, block select apps from spamming and disable it for a given time period (so you can turn it off at night).

It's not an always on display like Samsung and LG offer, but it comes on when a new notification arrives, when you pick the phone or when you double-tap the screen.

The app also enables the two usual Moto gestures - chop twice to turn on the flashlight (and again to turn it off) and twist your wrists twice to quick launch the camera. There's no notification LED, though, so you do have to interact with the phone to see if there's anything new after the initial display.

There are also a couple of gestures for the ringer - flip for Do Not Disturb and pick up to stop ringing.

The Moto app lets you tweak the added Moto features

Other than the Moto Screen, the lockscreen is plain Android. This means time and date, notifications and two shortcuts - Camera and Voice search.

Behind the lockscreen is the Google Now launcher. The left pane is your Google Now view with all relevant info cards. To the right are standard homescreens. Swiping up from any interface brings up the Now on tap feature - now more content-aware and smarter than ever.

The Notification area shows notifications on the first swipe and then Quick toggles upon a second swipe. You can also do a two-finger swipe to get straight to the Quick toggles. This is the vanilla Android setup and it is gaining popularity as many phones stick close to AOSP and even skinned ones like Xperias do not change it.

This includes the brightness slider that lacks an Auto toggle. You have to go into the settings menu if you want to enable/disable automatic brightness.

The app switcher is the usual 3D rolodex. Google has been considering adding split-screen multitasking for ages (since Lollipop), but it never gets past the beta stage of the latest Android (it's buried deep somewhere in Nougat, let's see if it survives this time).

One of the few extra features the Moto G4 Plus has over its basic G4 sibling is the fingerprint reader. We already mentioned its obvious design drawbacks, at least as far as our tastes go and room for functionality improvement. On the plus side (get it?), however, it is very snappy and quite accurate, also, always on. So, overall, we can't really complain.

The interface you get to manage the fingerprints is, as expected, pretty generic and vanilla as well. It is straight-forward and definitely gets the job done.

Best mobile till now for me its working without problem since june 2016. still running like new phone.

Change the charging cable.. use the good quality cable