Lenovo runs three smartphone brands semi-independently - its own Vibe line, the Moto phones and the ZUK brand. It has considered many different ways to brings Vibe and Moto together (to leverage Motorola’s better brand recognition), but in a surprising move it has ported the custom ZUK interface to Moto phones.

The Moto Z flagship and Moto Z Play mid-ranger specifically, currently being used by 25 beta testers. It seems that (for now at least) only Moto-branded phones sold in China will use the ZUI software. 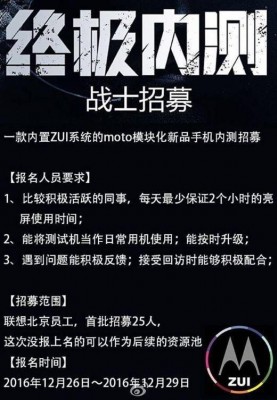 Recently, Lenovo bumped up ZUI to version 2.5, which is based on Android 7.0 Nougat. Also, ZUK phones sold in India come with the Google launcher by default instead of the ZUI one. Still, Motos have a reputation of bloat-free software and this might change if Lenovo decides to run ZUI on Motorola phones globally.

Whether that happens or not, the Vibe sub-brand may not be long for this world - recent Lenovo phones are not labeled “Vibe” and the custom software they run may no longer be developed (switching instead to ZUI as well).

May soon be running Suk custom bloatware you mean?!

Just don't! I ditched the rookie (half-backed at best) ZUK software from my ZUK Z2 and installed a custom firmware.

So they started from China.