Motorola has started sending out the update to Android 8.0 Oreo for the Moto Z Play in India. It comes as a 1.12GB download, so if your data plan is limited make sure to grab it via Wi-Fi.

After installation, your Moto Z Play will be on software version OPN27.76-12-22, with the April 1, 2018 security patch level. The latter is a nice surprise given how appallingly mid-rangers are usually treated when it comes to security fixes. That said, the Moto Z Play is unlikely to receive another update for some time (or ever), so hopefully no huge vulnerabilities will be fixed by forthcoming monthly security patches. 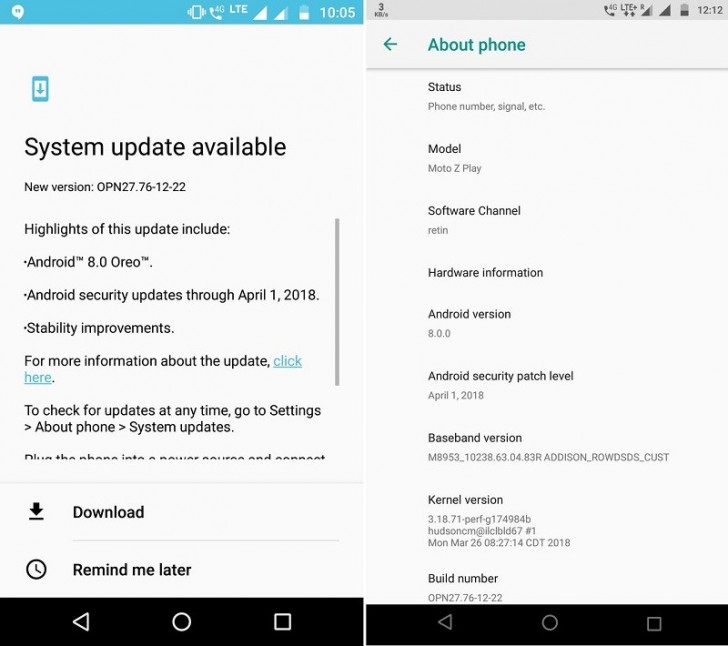 The Moto Z Play has had quite a run since it was launched in 2016. The initial software it ran was Marshmallow, and it then got updated to Nougat last year. The Z Play was praised by many as a battery life champ, and a rather affordable one at that. Unfortunately Motorola ignored what made the Z Play successful and decided to give its successor a much smaller battery. Perhaps the Z3 Play will remedy this, but we're not holding our collective breaths.

After an upgrade to Oreo, battery is going down to fast 2 hours.

Haha.. so late I got oreo in jan for my zenfone 3 which costs half of this phone I was thinking of getting a moto Z2 play for its amoled display but after this I wouldn't buy anything from moto again

For those who updated their OS, can you please tell me how din this affect the battery life? Is it the same, is in worst, is it better? Thank you.