It was the alliance with Android that put Motorola out of the woods. Like every partnership, it’s been a series of peaks and dips but every now and then the relationship between Motorola and Android goes beyond a mere marriage of convenience and well into a simmering love affair.

They did it with the MILESTONEs and the DROID X, the BACKFLIP and the DEFY. With the ATRIX 4G, Moto says it has no plans to live in the shadows of other big makers. 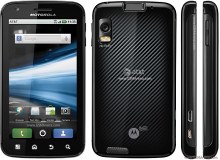 The Motorola ATRIX 4G is the first dual-core smartphone in the Motorola line-up. It’s also the first to flaunt a qHD touchscreen. That’s as solid as credentials get. Add the fact it’s the first handset for Motorola to support the fast HSDPA+ network (hence the 4G moniker) and you’ve got yourself a Droid that’s not afraid of what comes next.

Dual core is certainly the next big thing in mobile phones and the Motorola ATRIX deserves credit for being among the first – our bad really, this review isn’t exactly on time.

But there are other bold decisions that Motorola had to make. The HD and laptop docks for one – though the concept is not exactly original, Motorola is trying to make it mainstream. The added fingerprint scanner is not new either but well forgotten old does just as well. Plus, it will satisfy the privacy freak in all of us.

Anyway, the standard package is what we’re interested in and this is what our review will focus on. The optional extras can wait. The ATRIX is more important to us a phone (a dual-core smartphone, to be precise) than a wannabe laptop or a potential entertainment dock. Let’s waste no more time and take a glimpse of the ATRIX 4G’s key features.

The ATRIX 4G is certainly the most powerful phone Motorola has made so far. With a 1GHz dual-core processor, 1GB worth of RAM and the ultra low power GeForce GPU under its hood, the ATRIX 4G is set to win the hearts and minds of power users.

Garnish all this premium hardware with a 5MP camera with dual LED flash and a 4-inch capacitive touchscreen of qHD resolution of 540x960 pixels, and the ATRIX 4G is more than ready to play with the other dual-core kids.

As for us, we are about to take a closer look at the design and build of the phone and find out if it matches the premium hardware that resides within.

fantastis phone. I have one of this in storage. Shame doesn't receive more new android versions

Simply the best, I have had this phone since June 2012, and it is the best phone ever, it does everything and is much better than a lot of more expensive phones, the one I have is finaly on its last legs wont ring anymore and wifi and bluethooth is n...