Motorola Edge stops by Geekbench ahead of its April 22 announcement

Motorola is officially getting back into the flagship smartphone game with an announcement on April 22. At that point, rumor has it we'll be introduced to the top of the line Edge+, as well as the slightly lower-end (but with what will hopefully be a more palatable price point) Edge.

The former has already been spotted in the Geekbench database back in January, while the vanilla Edge took its sweet time but finally arrived there today. Its benchmark run saw it score 505 for single-core and 1410 for multi-core. 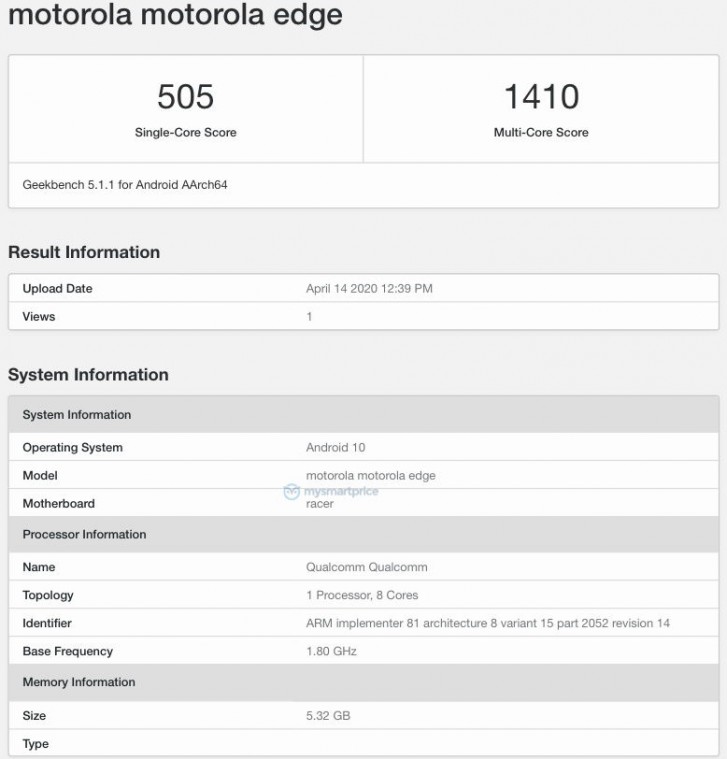 Remember, the Motorola Edge is rumored to sport the Snapdragon 765G chipset, unlike the Edge+ which is expected to go with the 865. The Edge that ran Geekbench today also has 6GB of RAM, while the plus model may start at 8GB. The Edge will unsurprisingly run Android 10 from day one, and may or may not be an exclusive to Verizon in the US.

Past mumblings also talked about the Edge+'s 108 MP main camera being swapped out for a 64 MP sensor in the Edge - or maybe that will be 48 MP. 5G connectivity is sure to be built-in, and the Edge may share the 6.67" screen size with its more expensive sibling, while having just FHD+ resolution and not QHD+. All will be revealed in just over a week, so hang tight.

Even Moto g5+ superm I just like it enjoy it

Please have wireless charging. I'm still using my Motorola Droid Turbo 2 because none of the newer models have it. This thing is almost a brick. I'll have to switch to a Samsung if the Edge doesn't meet my needs.