This being the fanciest Moto G to date, the G100 is not without standout design touches. Perhaps the most tangible of all is the gentle curvature of the front glass towards the edges. It's not quite like the Motorola Edges, but it does feel nicer as you swipe in from the sides than what the Moto G30 and G10 do. 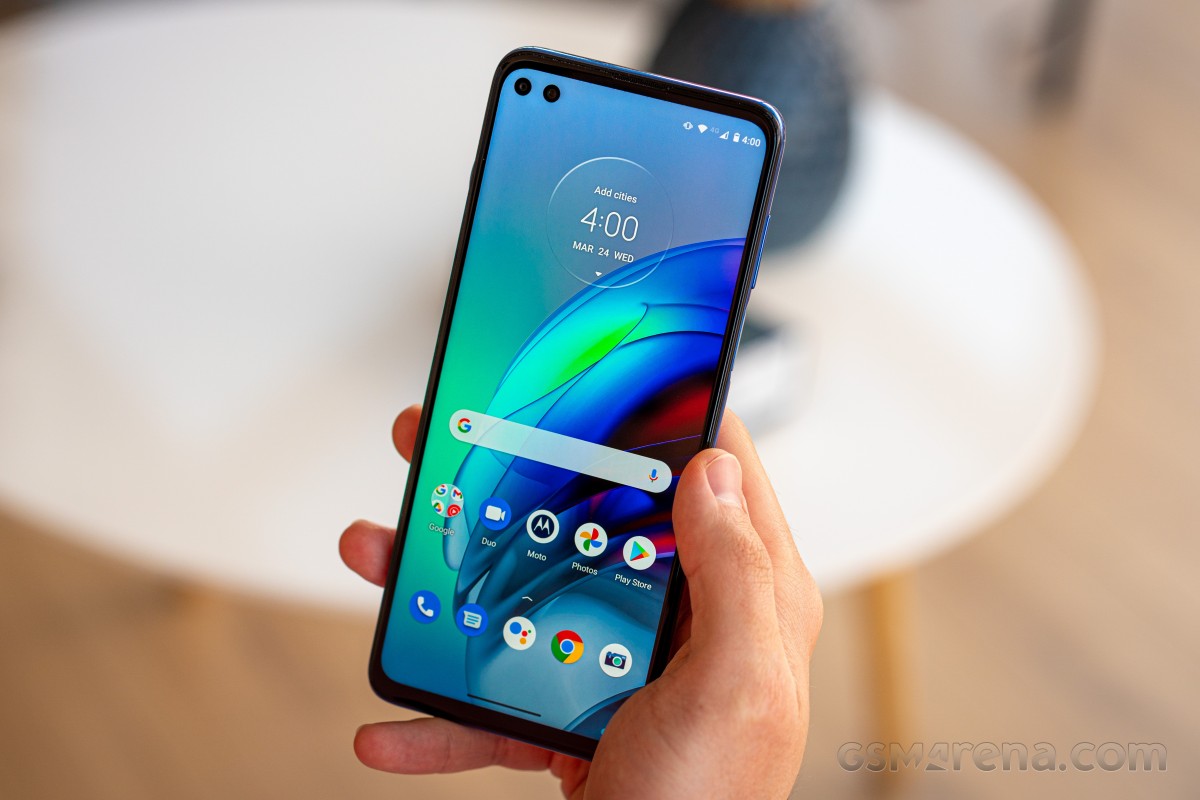 It's also not quite as bezel-ly as the lesser Moto Gs, particularly when it comes to the chin. We're not saying the black border around the display is thin; no, it's just thinner than what you'd see on the immediate family members, particularly the chin.

Then there's the matter of the oversized aspect ratio - at 21:9 the Moto G100's display is taller than the other Moto Gs and most other phones. If you're one to obsess over these things, you might find it top-heavy, but it's hardly a deal-breaking offence, and it's certainly something you won't be noticing a few days in.

What you won't be able to escape is that the top half of the display is simply out of reach, that extra bit more than on the rest of the current phones. Some operations are just two-hand operations, and that's that. 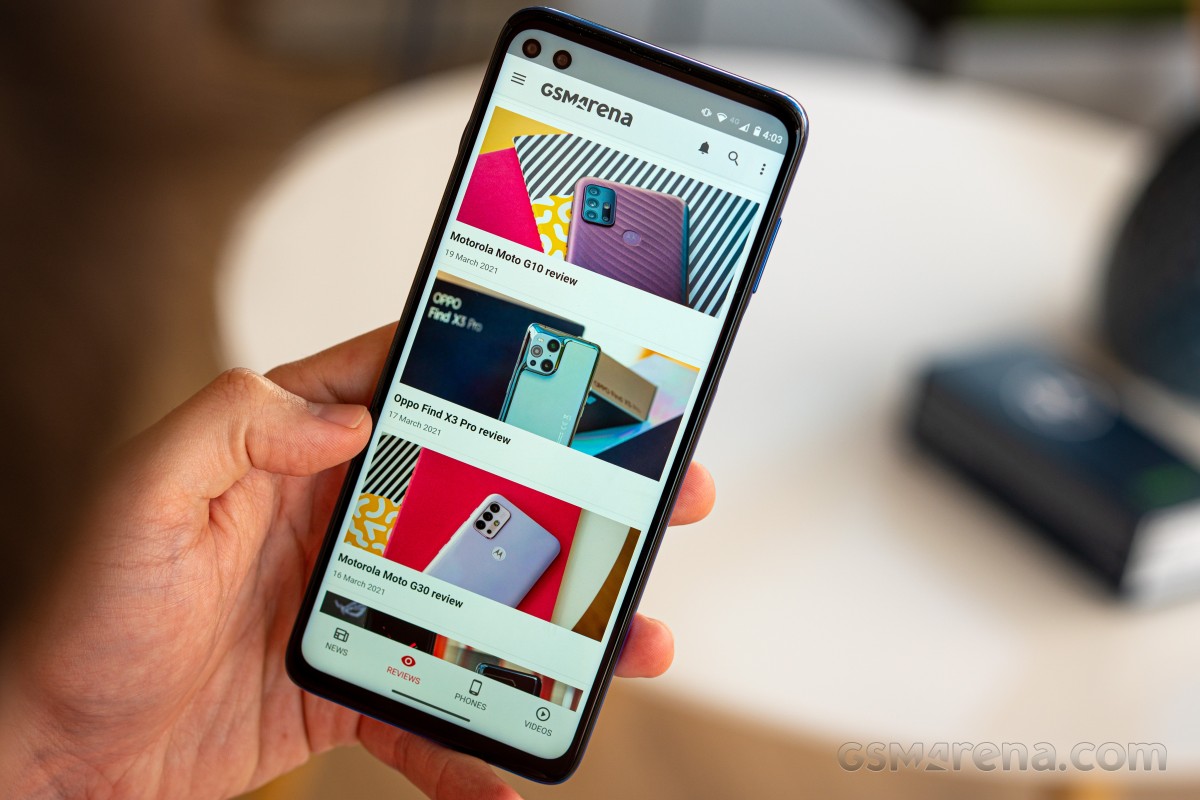 Another unusual bit for a Moto G, though not exclusive to the G100, is the punch-hole - most others have some sort of a notch instead. The Moto G100 has not one, but two punch-holes, in fact - each of the two selfie cameras gets its own cutout.

Since we're in these quarters, let's mention in passing that the earpiece is just that - Motorola missed the opportunity to give it double duty as a second speaker for a stereo setup. 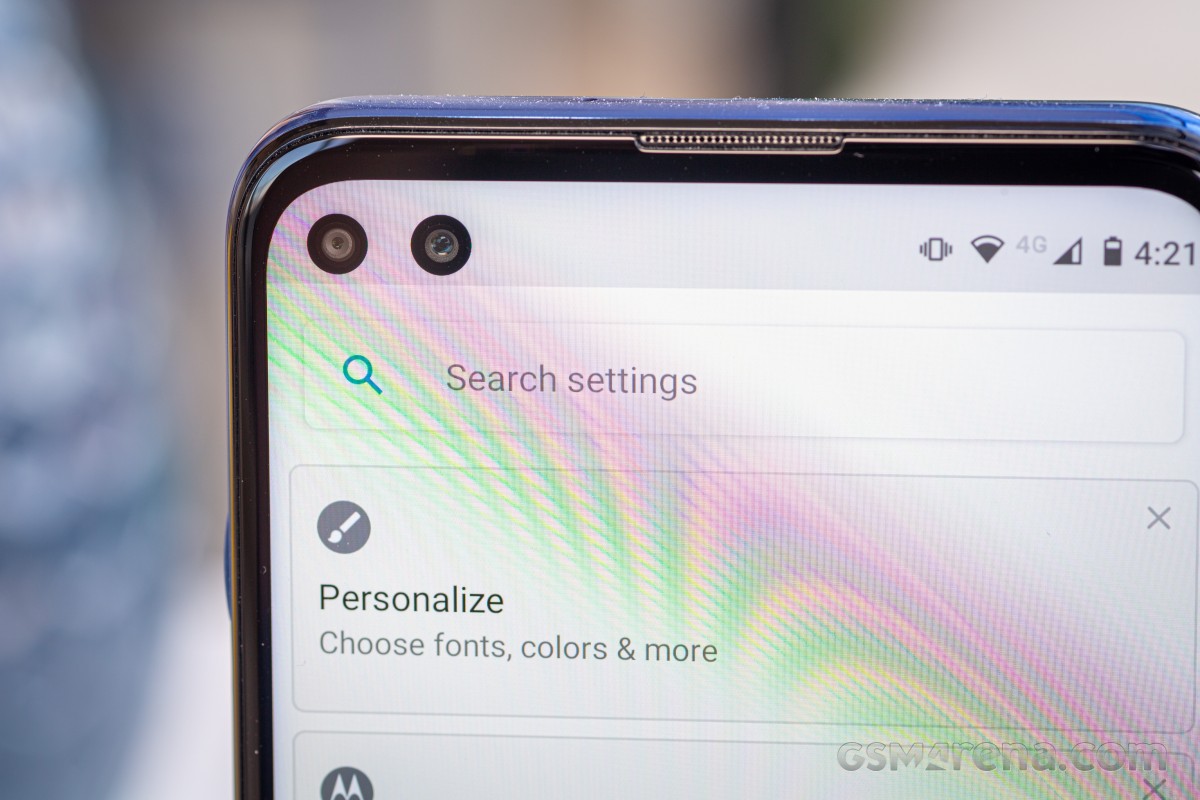 Flipping the Moto G100 to reveal its back, there's a fair number of things to talk about. For starters, the explosion of color. Our review unit is in the Iridescent Ocean colorway, and its hues vary from cyan through magenta to purple. 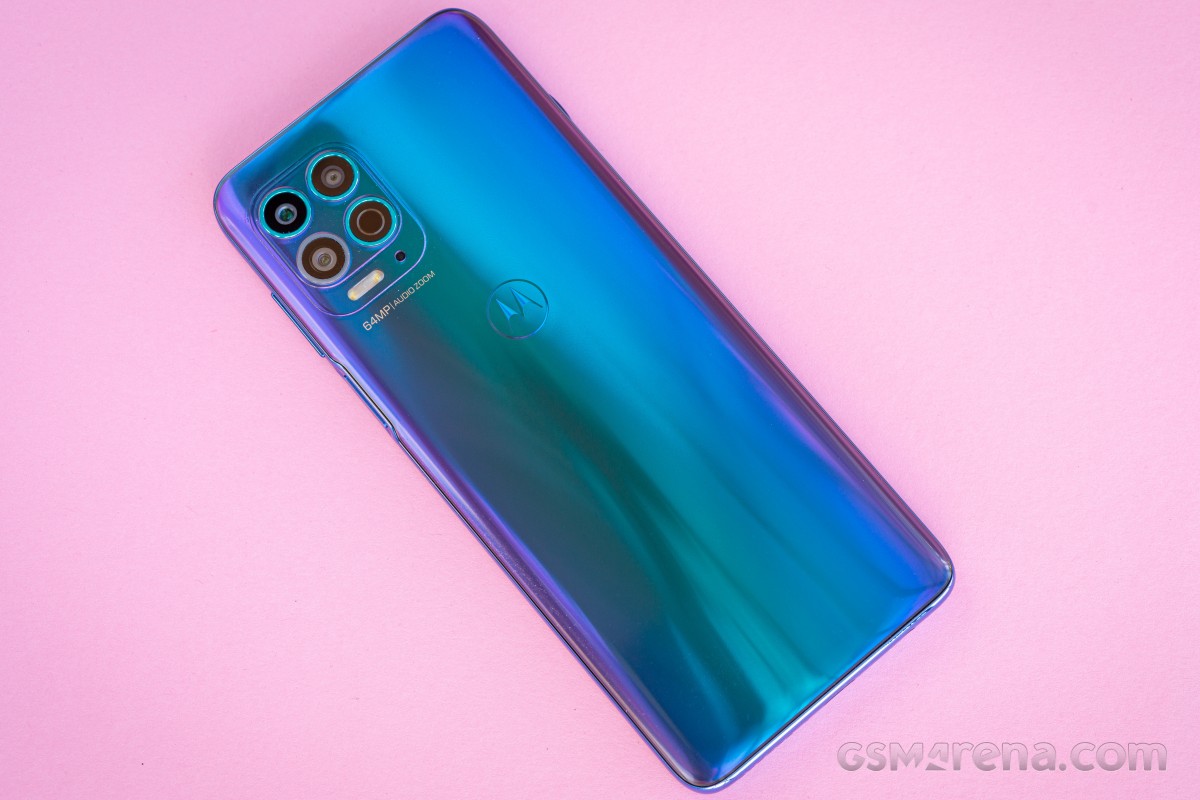 Two alternative paint jobs exist. One is called Iridescent Sky, and it uses more of an overcast cloudy white-ish sky as the base for its iridescence, at least in the pictures we have. The other is called Slate Gray and is the most understated of the three. Not all colorways will be available across all markets, or at least not at launch - Europe is seemingly not getting the Slate Gray on day one. 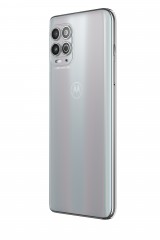 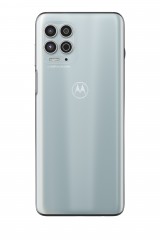 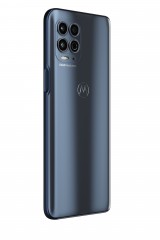 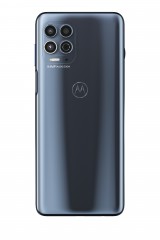 Iridescent or slate, the Moto G100's back panel has a frosted matte finish that's probably the most middle-ground we've seen, and in a good way. It's not as slippery as other frosted panels we've encountered, but it picks up fingerprints a bit more. Then again, your attention is unlikely to be drawn by the smudges with all the color blending action. Plus, it's miles better in this respect than a glossy panel, by definition. 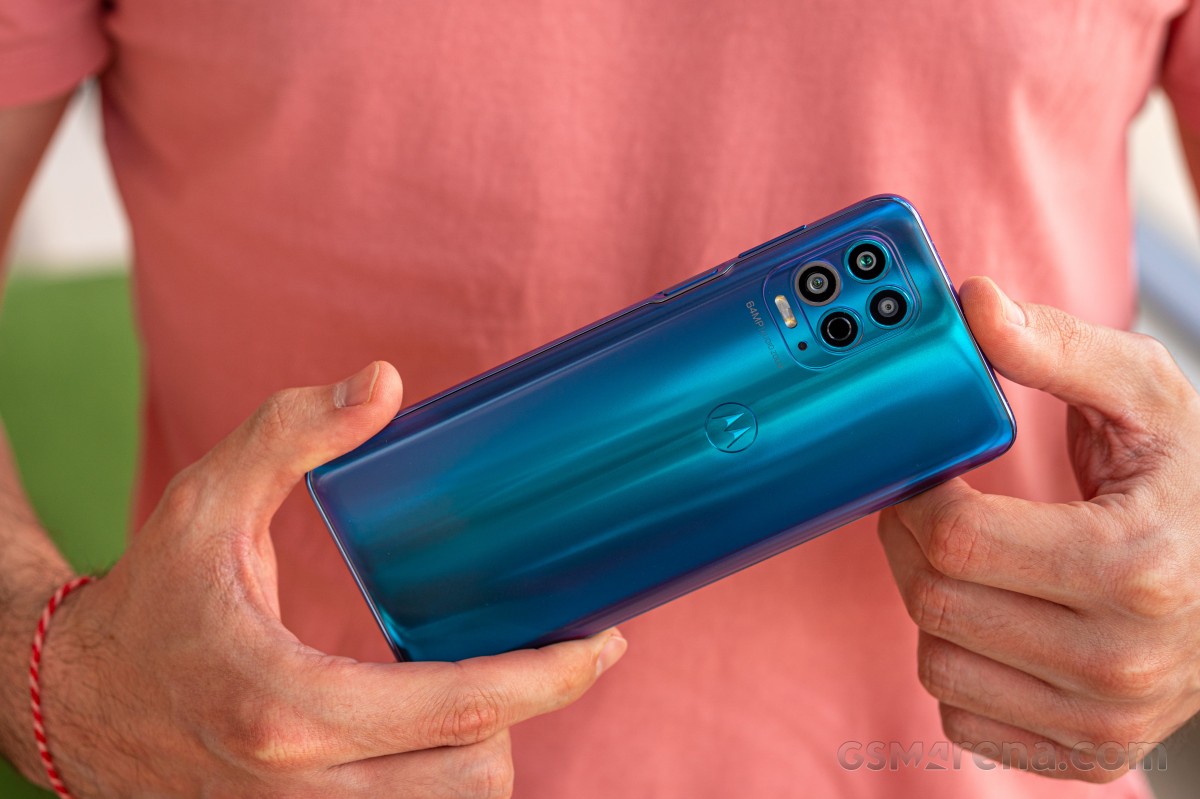 One thing we can't confirm is what material the back is made of. Motorola doesn't specify it, and even though it feels like glass to us, we're not ruling out the possibility that it's a really nice plastic.

Moving on to the camera cluster, which isn't entirely ordinary itself - it looks like a quad-camera configuration, but it's not really that. The Moto G100 has two real cameras (one regular, one ultrawide), and then an extra module for depth detection, plus a ToF module. 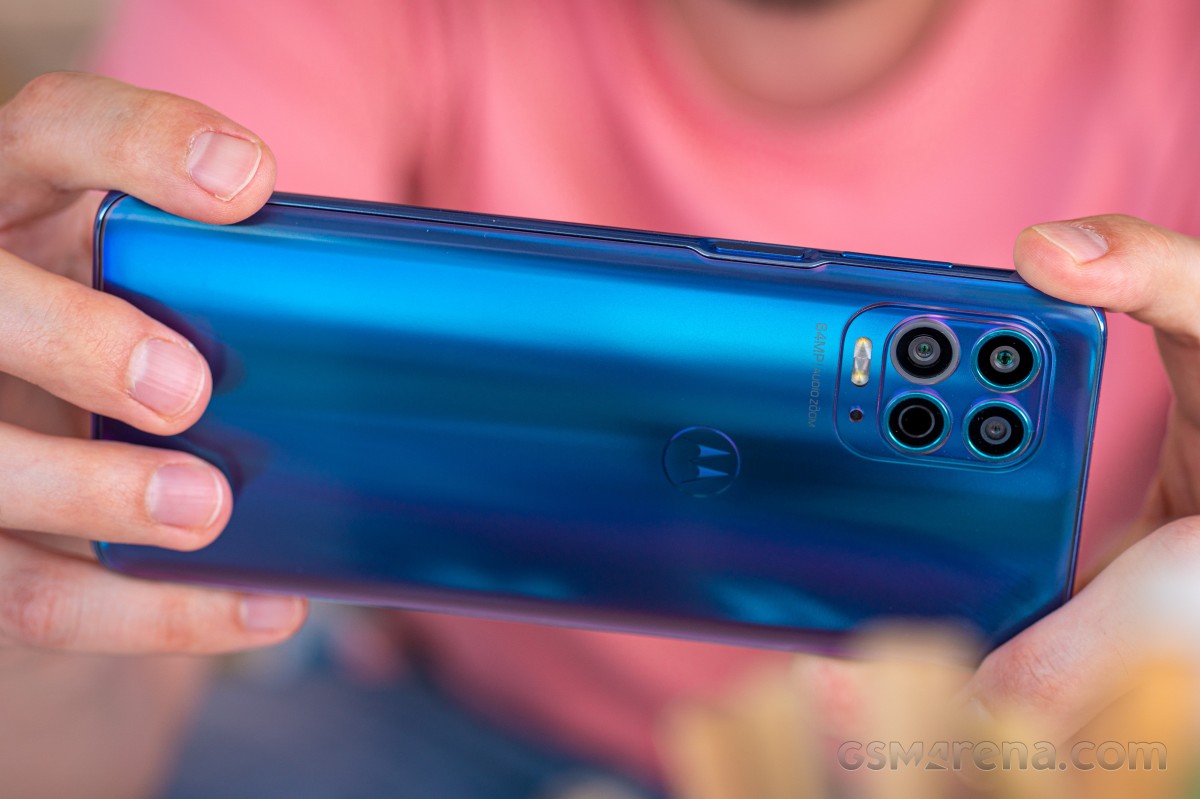 Three of these have shiny accent rings to match the color scheme of the phone, so they are... cyan?... in our case. The fourth ring is, in fact, a ring flash, or more like four LEDs behind a diffuser. This one is only available when shooting in close-up mode (perhaps this reviewer will eventually concede and adopt 'macro', even though it isn't). This is the ultrawide camera inside the ring flash, and that's the one used for close-ups. For non-close-up ultrawide use, the ring flash is deactivated, and the regular (and brighter) dual LED unit takes over. 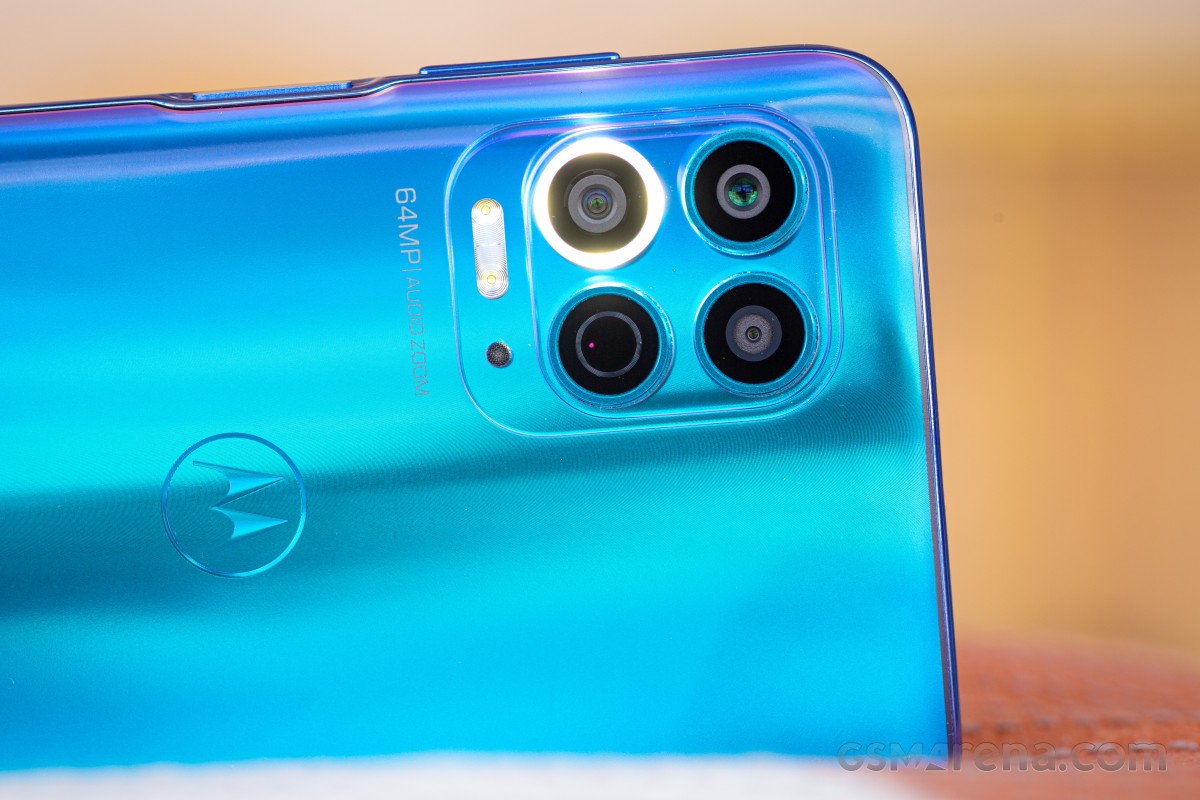 We don't care much for the 64MP | Audio Zoom inscription, but we do admit it's one of the subtler camera brandings there are. An 'M' bat logo is underneath the frosted surface providing brand recognition with a dash of design highlight. 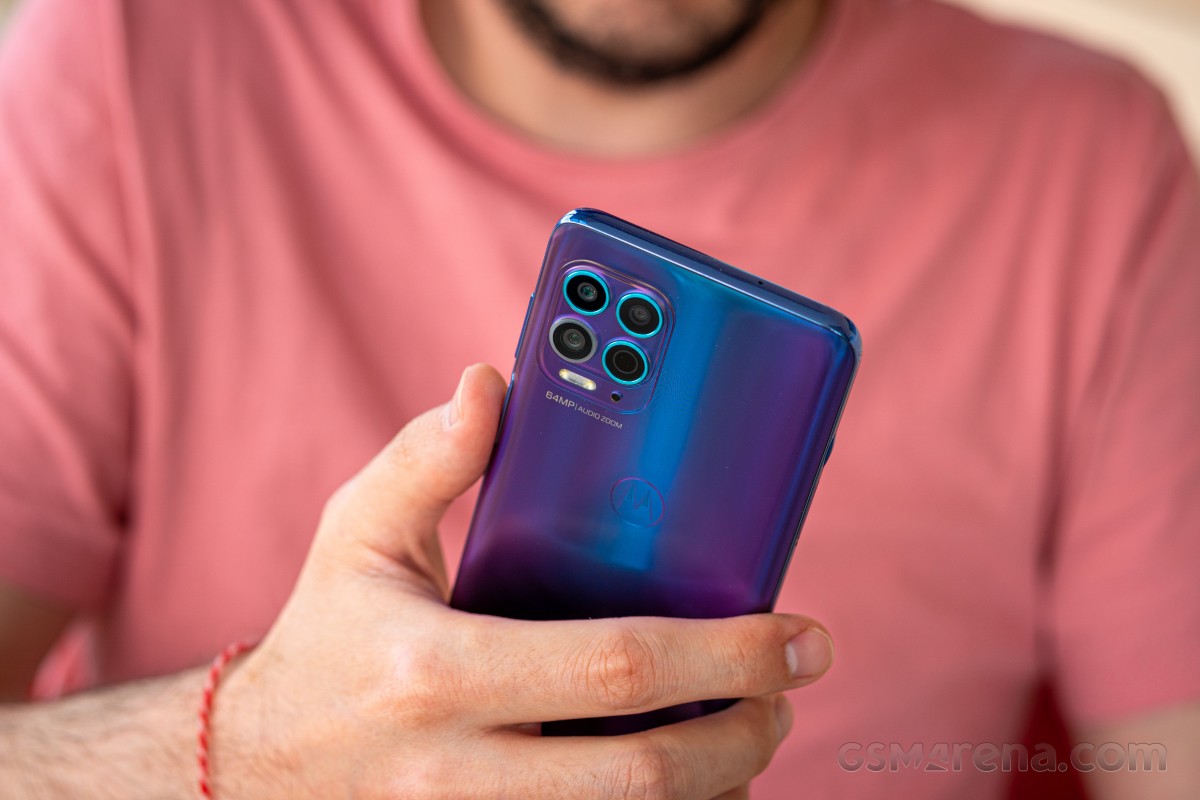 As you noticed, the bat logo isn't a fingerprint reader, and since we know already that the G100 has an LCD on the front, an under-display solution is out of the question too. So a capacitive sensor embedded in the power button on the side is the logical solution. It's recessed into the frame, so it can feel a little bit as if you're pushing into the bezel, but it does click positively. 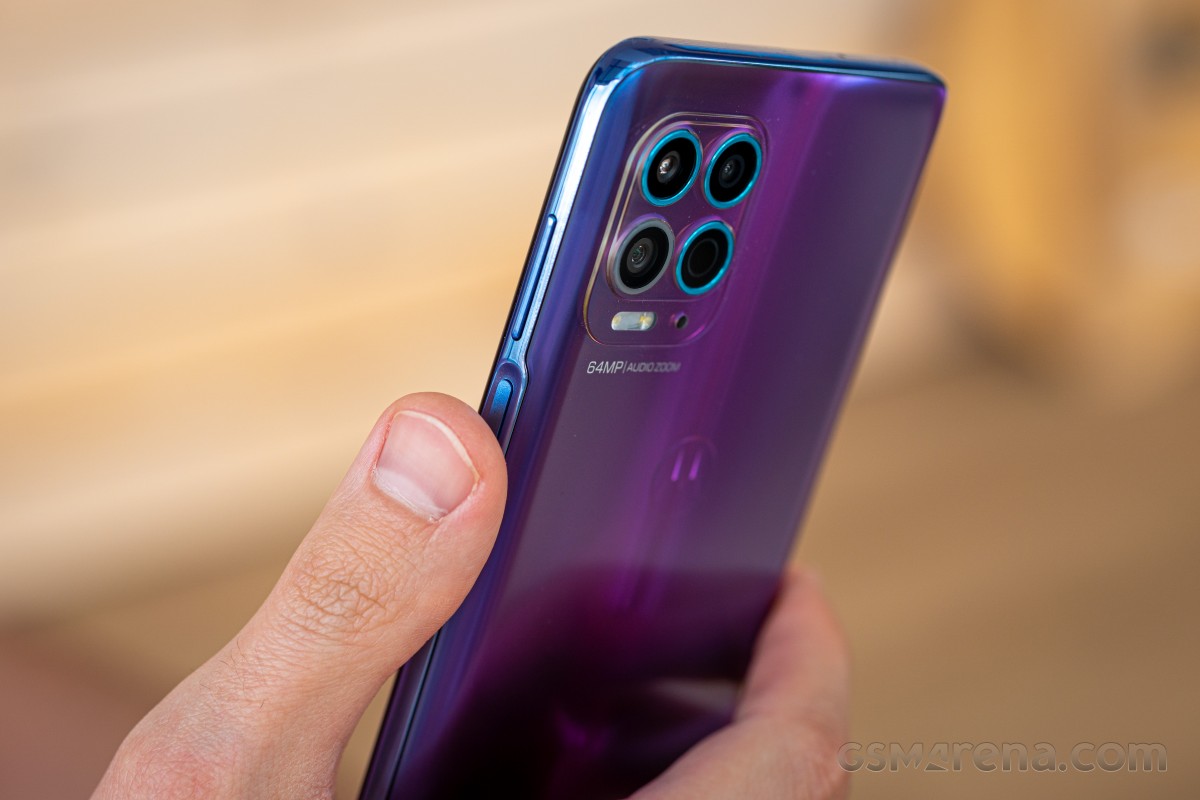 The fingerprint recognition itself works reliably, both for right thumb and left index finger action. Smartphone-lefties can be at a disadvantage with these right-mounted readers, and we've seen phones that do indeed favor right-hand unlocks, but the Moto G100 is ambidextrous.

Due to the sensor's relatively high placement, accidental caresses with other parts of the palm aren't as common, and the possibility of slipping the phone into your pocket while accidentally unlocking it in the process is also slim. Even so, there's an option in settings for the unlock procedure to require a press, as opposed to just a tap, thus making unwanted FPR actuations improbable. 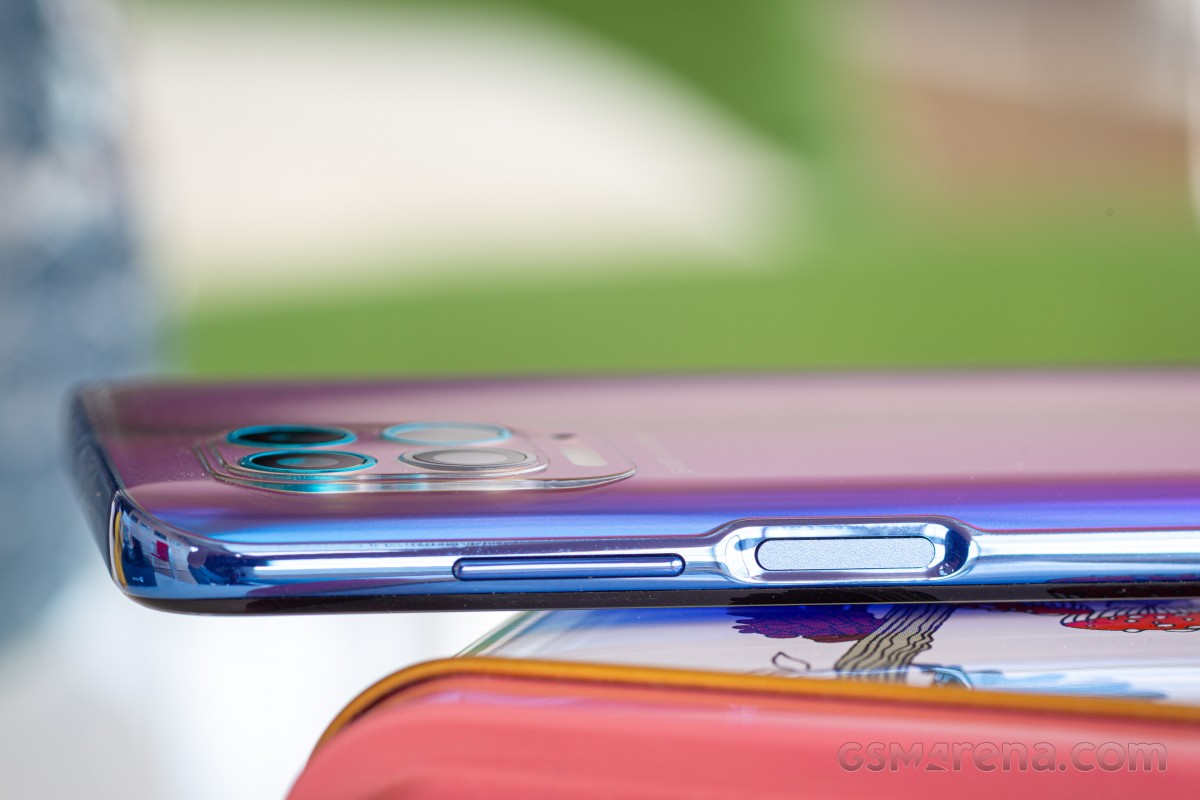 On the opposite side of the handset, you get a small Google Assistant key. It's so tiny and placed so far out of reach that it's almost as if Motorola doesn't want you to use it. Right next to it is the card slot with a dual-card tray inside - you can put two nano SIMs or a nano-SIM and microSD inside, but not all three at the same time.

There's also a rubber seal lining the tray to help keep dust and moisture out. The phone is specified as having a water-repellant design, so it carries no formal IP rating, but it should be good against some light rain. 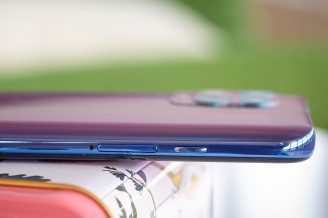 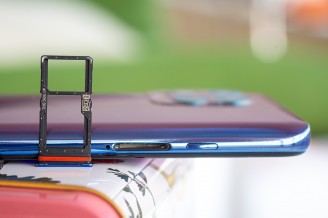 Continuing the tour of the frame (which is plastic, this much we can tell), we can see the usual bits on the bottom. There's the USB-C port, the headphone jack, loudspeaker and primary mic. A solitary secondary mic is on the top plate. 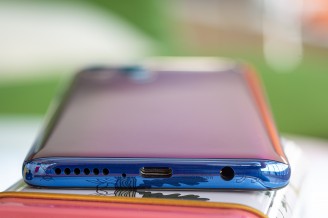 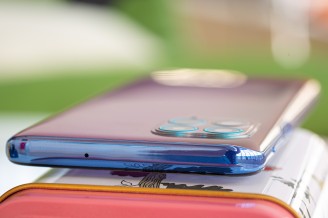 The Motorola Moto G100 measures 168.4x74x9.7mm, making it both taller than most in its class, as well as slightly thicker. It's heavier than average, too, weighing in at 207g, though its Chinese Edge S counterpart is, oddly, even heavier at 215g. 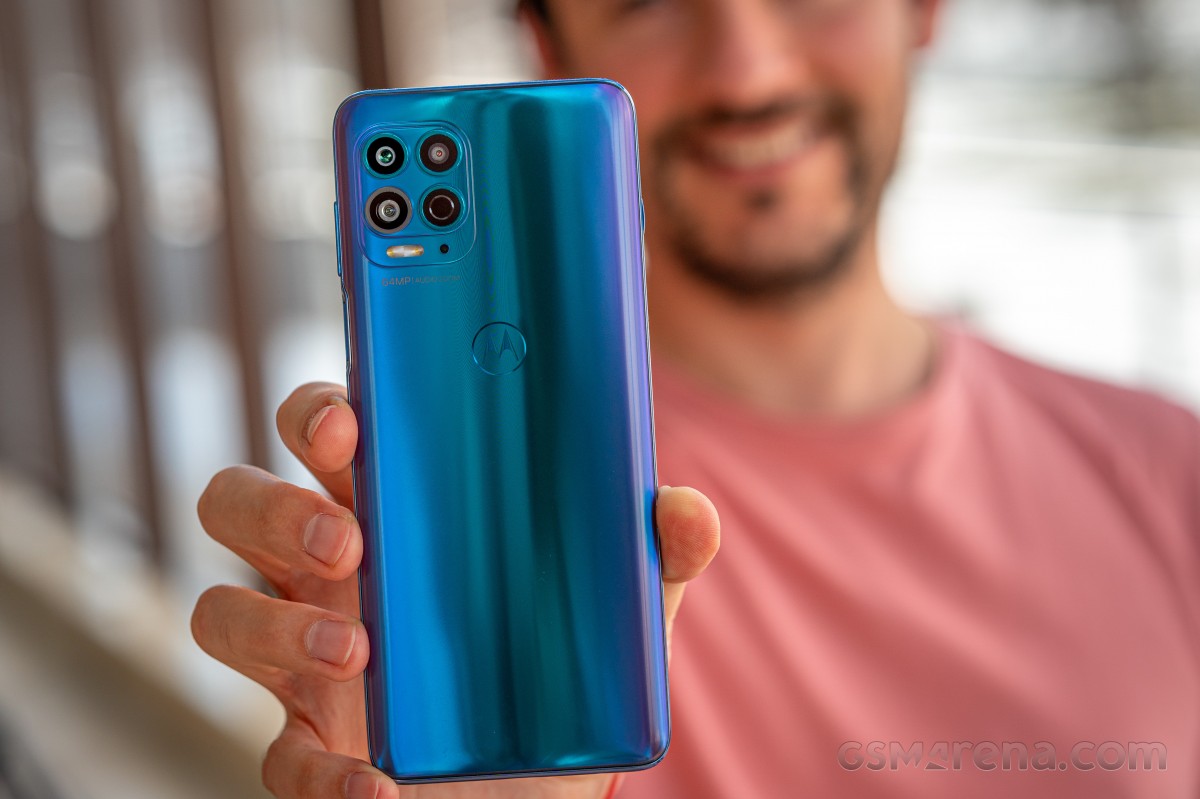 That may sound tempting, but the Edge S doesn't have Sub6 5G network. This one does.

"there are better ones for the money" this con say it all. I just have one question for the author : WTF