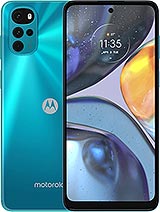 Danny301, 11 Mar 2022I've done a lot of tricks to increase battery life, bu... moreThey are even using 28nm still because all the new chips are in high demand.

Unisoc SC9863A is a good example featuring A55 cores and 28nm node!

Very bad phone. Helio G37 is powerless. For the same price you get Moto G50 which has much better performance and battery life

I've done a lot of tricks to increase battery life, but I would really rather not have to do all of that. At this point, I'm not buying any phone that's on the 12nm process node or larger. I need better battery life and (optionally) better performance. End of story. Even this chip, the G37, would be fine if printed on a smaller node. Surely, they're aren't still making these chips. Maybe they're just trying to use up old leftover stock.

A stronger CPU and GPU would have been better. Helio G37 has a very weak GPU. Otherwise some feature like stereo speakers could have compensated for the weak chip.

The year is 2022. Using a cortex a73 cpu, which is 5 years old is unacceptable. Even the lower class should be equipped with a76. Do not buy anything below cortex a76.

I just hate manufacturers releasing 720p in 2022, last time i used 720p on smartphone was back in 2013,i wasn't rich either but knew what specs matters back then, Motorola & Nokia, both are most durable phone ever made, but 720p sucks, i would like to see some good Android under 6.2 inch for handy purpose

Adul Al Salami Kebab, 04 Mar 2022I use a phone with half of those specs! :DI feel bad for you. I hope you get a nicer phone soon bro.

Ben, 23 Feb 2022LSD screen and 720p Res it's with 12 mm CPU it's ... moreA guy that doesn't know processor's node size is on nanometer not millimeter and display technology is LCD ; claims that this phone is really bad .I'll let you judge on your own though I have nothing else to say ...

Will there be an international/US version of this phone?

LSD screen and 720p Res it's with 12 mm CPU it's just shitty phone for those old dude's like my father which have no idea what's phone it's at least price them at 149 Euro and price will work .

The Moto G31 is a much better option. I don't understand why Motorola even plans to release this Moto G22. Both cost the same price. The G31 has a Full HD Oled Display. Better CPU/GPU. Will also receive Android 12 and many more facts speaking for the Moto G31.

Its fine for 2019 to 2020 era but these days the A53 cores and that dual core graphics chip is gonna feel a bit slower than most prefer, its still a decent device tough!