Back in the day, the Motorola Moto G had a pretty clear angle going for it. It was the go-to, budget and vanilla Android device of choice for many. Since then, things have become a bit more complicated within the Motorola lineup. Now, there's a sprawling Moto E family, a growing Moto C and even a Moto E, all filling up the proverbial nooks and crannies of the budget niche as best they can.

While choice is hard to complain about, this new-found market saturation and segmentation do require some involved choices on the user's end. Thankfully, for the most part, the Moto G6 Play brings a balanced mix of design and features to the table. Just like its older predecessors, the G6 Play is plastic all around and it still works just as well.

There are plenty of advantages to using the relatively light and less dent-prone material. Lenovo has even put in the extra effort to coat the central frame in a metal-like fashion. We've seen more believable finishes out there, but still, a good effort.

In place of the more traditional unibody approach, Motorola decided to go for a modern look this time around and a glossy, curved back surface. Naturally, just like the rest of the body, it's plastic as well, but actually does a pretty convincing job of imitating metal.

This could potentially spell out trouble if you tend to bang and slap your phone around a lot. Plus, chances are you'll never get to see the surface fingerprint-free from the moment you first pick up the Moto G6 Play. Still, it does make for a decent hand feel.

Moto G6 Play in the hand

On a more positive note, the signature Motorola splash-resistant nano coating on the electronics inside is still part of the mix. We are kind of hesitant to get the phone deliberately wet to test it out. But then again, that's missing the point entirely. It's just meant to be the extra piece of mind in case of rainy weather or an accidental splash of water.

In many ways, the Moto G6 Play has a traditional setup on the front - no capacitive navigation keys or fingerprint reader, a fairly wide bottom chin, with the entire surface covered by an undisclosed version of Gorilla Glass. 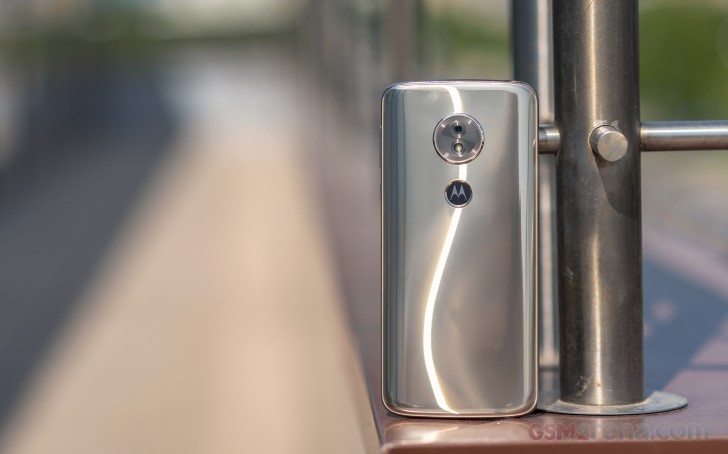 At the same time, however, the new Moto G look is trendier than ever, mostly thanks to an extra-tall, 18:9, LCD panel, shared by all three siblings. It even has rounded corners, in keeping with the trends of the day. Just like the regular Moto G6, the G6 Play gets a decently sized 5.7-inch display - fairly large for a "Play" device.

The only real difference in the display department between the two devices is the resolution - it's 720 x 1440 pixels on the G6 Play. However, fewer pixels mean less strain on the GPU for on-screen rendering task. A bonus that is sure to shine through in the benchmark section of the review.

We can't fail to mention that Motorola didn't find it necessary to fit a notification LED on the front of the G6 Play, but there is still an LED selfie flash.

Like we mentioned earlier, the curved back side of the Moto G6 Plus is plastic and thus not necessarily the most sturdy surface out there. We would definitely recommend using the provided case, which also offers the bonus of not having to deal with the almost unnatural amount of dirt and grease the back accumulates.

Moto G6 Play back side

The camera module protrudes a bit, but it's nothing major. One would hope so, considering the G6 Play is 9mm thick. It has this watch dial effect going for it and the lack of a second camera module allowed Motorola to go for a vertical arrangement. So, there are no shocked and surprised smiley configurations on this one.

Right underneath the familiar circular camera module is an even more familiar and traditional "M" dimple. Long-term fans will remember the little signature detail was mostly for show back in the day. Now, it also doubles as a home for the fingerprint reader. Getting the dimple once again looks retro fancy in just the right way. Resting your index finger there during calls feels right.

The fingerprint reader itself is pretty reliable, but not exactly what we would consider speedy. It is more versatile than before now that Motorola can use it as an authentication to manage and auto-fill passwords in apps and websites and even log-on to Windows devices.

Moto G6 Play from the side

There's not a lot to mention about the sides of the Moto G6 Play. The bottom is almost entirely empty, housing only the dated microUSB port and the main microphone. So, where are the speakers then you ask? Well, turns out the phone only has one and it's the earpiece. It's pretty quiet as well, but more on that later.

The top is equally barren, with a pair of holes - one for the secondary, noise-canceling microphone and the other the tried and true 3.5mm audio jack. The left-hand side has a single cut-out for the card tray. Motorola could have done a better job slicing it out and then dampening it since it doesn't really sit flush and rocks in place a little bit when nudged. However, these are all petty complaints that get dwarfed by the fact that the tray has three whole slots (two in the Single SIM models). Two for SIM cards and a dedicated microSD one. That means you don't have to choose between another phone line and memory - always a plus in our book.

All the buttons sit pretty high up on the right side of the device. Perhaps a bit too high for comfort, if you have smaller hands. Other than that, they are nice and clicky and well-defined. The power button, while on the slim side, even has an edged pattern going for it, so its very easy to feel around.

Overall, as far as controls go, no real complaints. It seems Motorola has handled the transition to a new extra-tall aspect ratio pretty well.

Had a Moto G6 play.It's signal quality was excellent. Bought a Samsung A 40 and unless I take residence close to the local mast It's almost useless.Would have bought another Moto but I don't fancy a 6.5 inch phone.

what is the compatible battery for moto g6play

It's a great phone. Not the best but I still love the phone. I also love the price of the phone fells like I'm paying just inof or less. BTW I live in Macidonia so the prices are different for me.