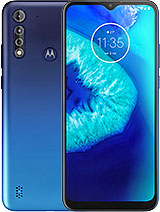 Rachel Smith, 28 Aug 2021In comparison to my previous phone (Huawei Y9) this G8 is r... moreHi I totally agree with you.Sound on phonecalls is poor and the battery life is less than a day and the phone is only a year old.

In comparison to my previous phone (Huawei Y9) this G8 is really bad. Its slow, it freezes, the calls are so quiet I have to put it on loudspeaker, its power hungry the battery doesn't last a day even though apps are turned off and only one sim is active. Feels cheaply made too.

This is a great phone. The battery lasts up to a couple of days if I'm just making calls and texts, less if I'm watching YouTube videos or similar but that's only to be expected. The size of the screen is great for videos and games, but the processor isn't really suitable for more demanding games - still, what do you expect for the price? Most apps run smoothly, and if 64 GB isn't enough storage for you it takes microSD cards. All in all it's well worth the money. I've been using it for 6 months and I'm very pleased.

At first Didn't like it but after using it Ido like more and more So quite happy now with it! thanks moto as always a good choice

This is a nice phone with good specs and build quality for the low price. It came with a soft protective case and it upgraded to Android 10 after setting it up. It has decent memory and storage and very few apps that I don't use pre-installed. Apps are responsive and smooth. I don't use it for games and don't imagine it would be fast enough for some games but this isn't the target market for this phone. The macro camera is good and the standard camera is nice for people photos but it is a bit dissapointing for scenery shots as the distance detail is not great. The battery is big and I charge it once every two days with moderate use. It has good reception on network and wifi and overall I am very happy with this phone for my day to day needs.

AnonymousMSF, 05 Mar 2021advantages of having this phone, (1) good battery life, la... moreIt's quite smart. Inever thought moto has this machine. It's nice

The best phone ever seen, thank you Motorola, from the bottom of my heart. Every thing goes all right, battery, camera, ram, internal memory , the screen , and the price...etc etc. I feel good using this phone. You are the best, thank you


1) super waste of money because this phone lags a lot, even with the 4GB of RAM
which apps do you use? If you´re expecting top notch perfomance for gaming from a 632......soul I state the obvious?!!!

(2) most of the time, flashlight does not work
If you don´t have moto actions , of course it doesn´t work, you´ll have to activate manually on settings, i´m sure it will work that way

(3) poor camera shots as well as the rough picture quality
It´s a low budget phone, again, what were you expecting ??! I´m sure the competion does the same....

(4) screen is blue-and-blurry and resolution is quite dull with poor brightness
Easy, just go to setting , screen, night light on that it will set the screen temperature a little warmer..
(5) deletes FOLDERS / DATA / ANY RECORDS from the MicroSD without any hint
Have you consider that the micro SD card has issues?

(6) phone automatically restarts / turns off itself, during normal use or a phone call
Perhaps in your pocket because if you press power button longer than 10 sec, it will restart your phone. During calls i find that hard to believe unless you let your battery drain completely.

(7) apps like ShareIT/ShareME fails to be operated, when these apps are about to be used, the phone automatically turns off / restarts itself
Maybe the app needs to be updated or it simply does´nt work for this model. Try a different app or simply use near by, included on android 10 to share content with other android phones near you, it´s under network/connectivity settings.


Again not defending this phone, but at least you could be fair , it´s a low budget devices, you should moderate your expectations when buying this type of product.

advantages of having this phone,
(1) good battery life, lasts upto a day with heavy usage
(2) does not gets heated-up easily, even with heavy use
(3) fast-charging is not that bad

disadvantages of having this phone,
(1) super waste of money because this phone lags a lot, even with the 4GB of RAM
(2) most of the time, flashlight does not work
(3) poor camera shots as well as the rough picture quality
(4) screen is blue-and-blurry and resolution is quite dull with poor brightness
(5) deletes FOLDERS / DATA / ANY RECORDS from the MicroSD without any hint
(6) phone automatically restarts / turns off itself, during normal use or a phone call
(7) apps like ShareIT/ShareME fails to be operated, when these apps are about to be used, the phone automatically turns off / restarts itself

conclusion: simply a waste by the services except good battery life. never thought, brand like MOTOROLA will bring such a waste phone ever, it would be far better to get shut like other branded mobile producers instead of being a waste over its past reputation-and-fame

Minimal features and slightly below average performance.
It's been going through slow patches recently, where for about 5-10 min it barely works. I still have over 18 GB of free space, that's more than my old phone had in total. Maybe its an app I have downloaded, or the way I use it.

cant find a case in uk

Potential buyer, 22 Oct 2020Can anyone tell me if the dual sim version offers 4g connec... moreBoth sims can use 4g, tested with mine SIM 1 on Rogers 4g and SIM 2 on Telus 4g.

Only 1 SIM at a time can be set as the data SIM though.

c1tizen-4, 10 Dec 2020You mean that the handset auto-updated through the system u... moreMy bad I didn't notice that I had Motorola privacy settings all off, that might be the reason why I wasn't getting the latest updates. Let's see what happens next days.

gnotes, 26 Nov 2020Has now updated to October 2020 Android 10 version :)You mean that the handset auto-updated through the system update software ? 'Cus mine when I check for updates it shows running Android 9 patch level : 5 June 2020 and it says is up to date.

Had a few weeks now, enjoying, however it has only upgraded itself to the June 2020 Android 9 and I'd like to see Android 10. Stable for now.