The Moto G9 Power is a budget phone, and it comes with a budget build. This does not mean cheap, though - Motorola has made some nice choices for the G9 Power design - you can see the cool grippy back. And the G9 Power also comes with a water-repellent coating on the internals, a feature Motorola pioneered. 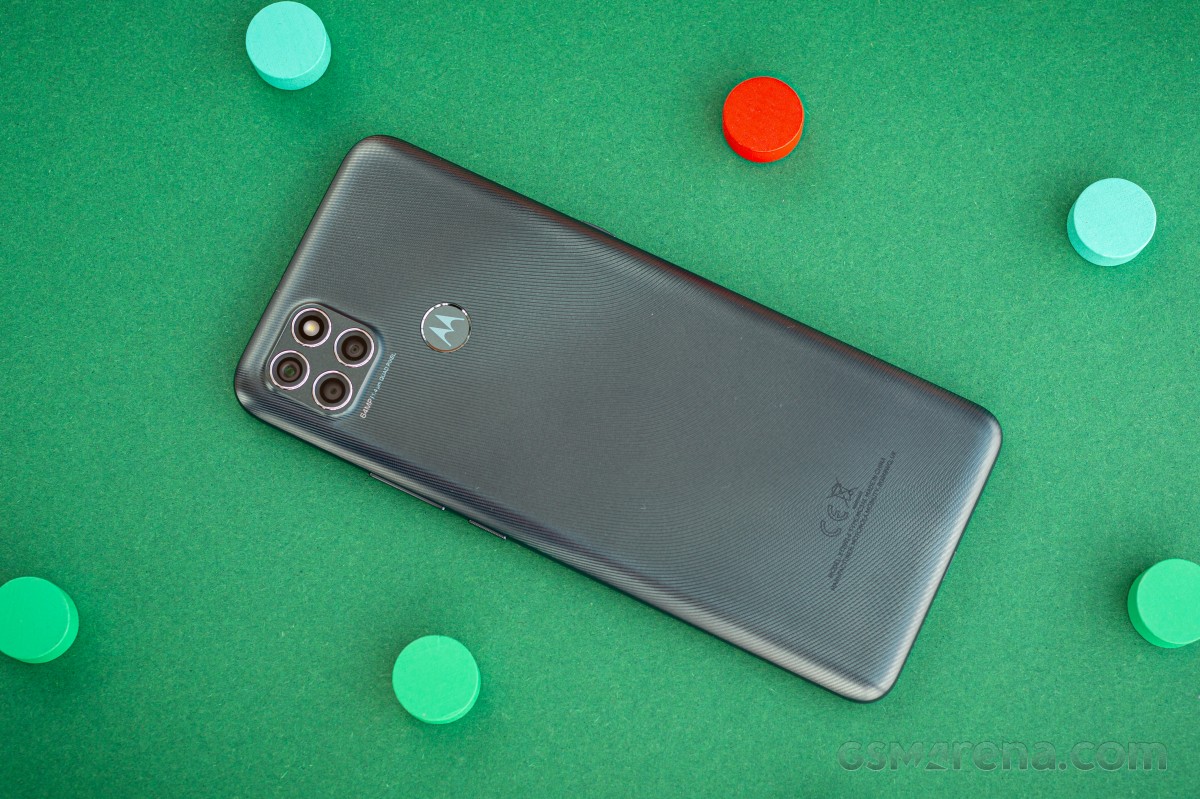 The Moto G9 Power has a glass front and an all-plastic frame and rear panel. No matter if you opt for the Electric Violet or the Metallic Sage (the greenish model we have here), the back cover will always feature this fingerprint-like texture that enhances the grip. The matte finish improves the smudge resistance, which is also a nice bonus.

The front of the Moto G9 Power is flat, the matte plastic frame - almost, while the rear plastic piece is slightly curved towards the frame. But even with these curvy contours, the Moto G9 Power proves a good enough grip to be used safely without a case. 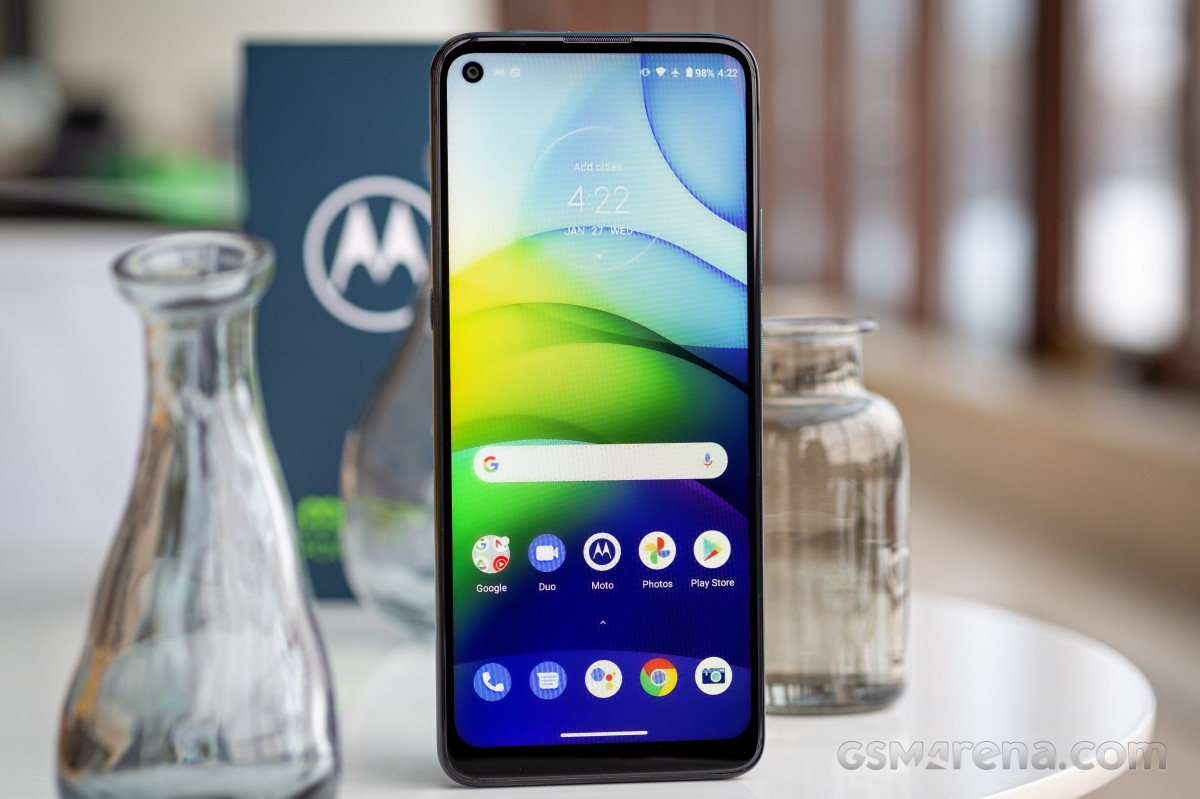 The 6.8" IPS LCD screen occupies most of the front, surrounded by a reasonably thin black frame except for the chin - it's large as it hides the display controller. The screen is of low HD+ resolution, and at that size - you can see the sharpness isn't stellar just by looking at the screen from up close. We didn't notice any major pixelization, but you can spot that it's a low-res screen - whether you are looking at the icons, some pictures or a video.

The round cutout for the 16MP selfie camera at the top left corner is small, though the uneven backlighting makes it a bit of an eyesore. You do eventually get used to its look, it's a €180 phone, after all, we just want you to have the right expectations, though. 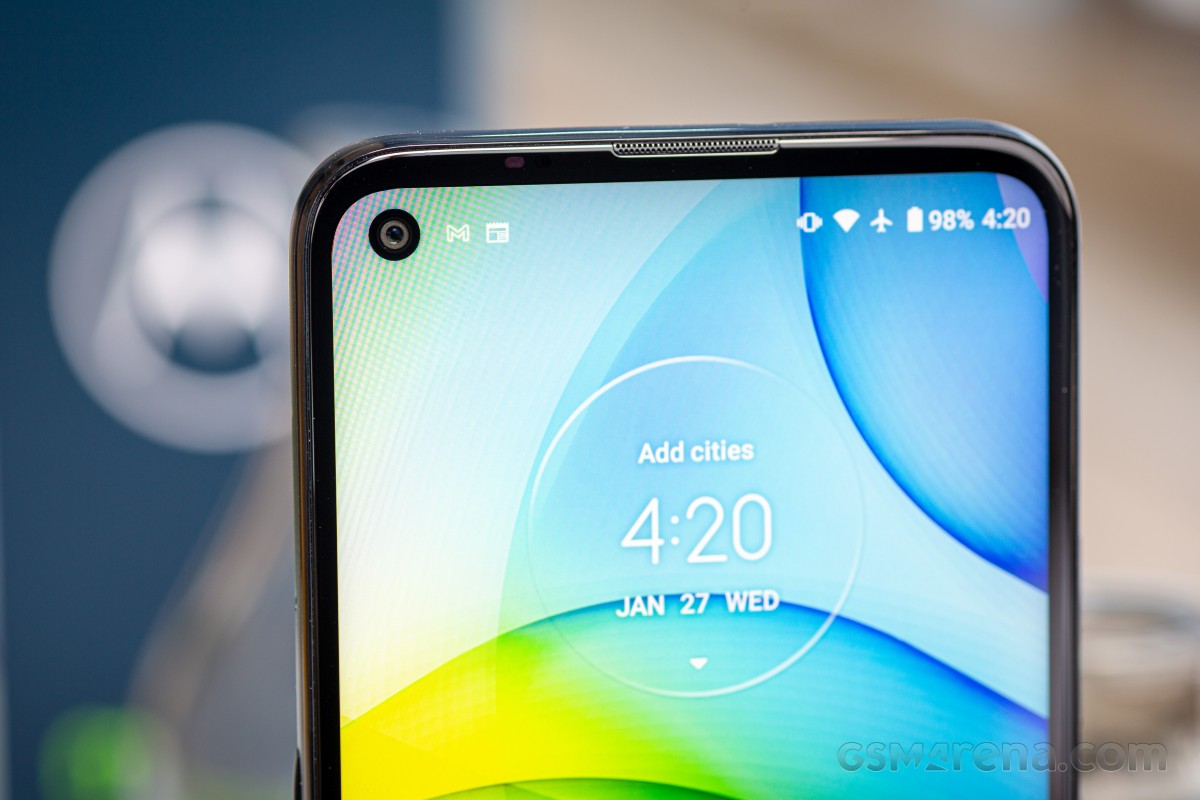 Finally, there is one very thin earpiece grille above the screen, just next to the frame.

We really like the back of the Moto G9 Power. It is quite cool to touch and run your fingers against, and we admit we've done it way too many times already.

There are two major points of interest on the back - the main camera setup and the fingerprint scanner. 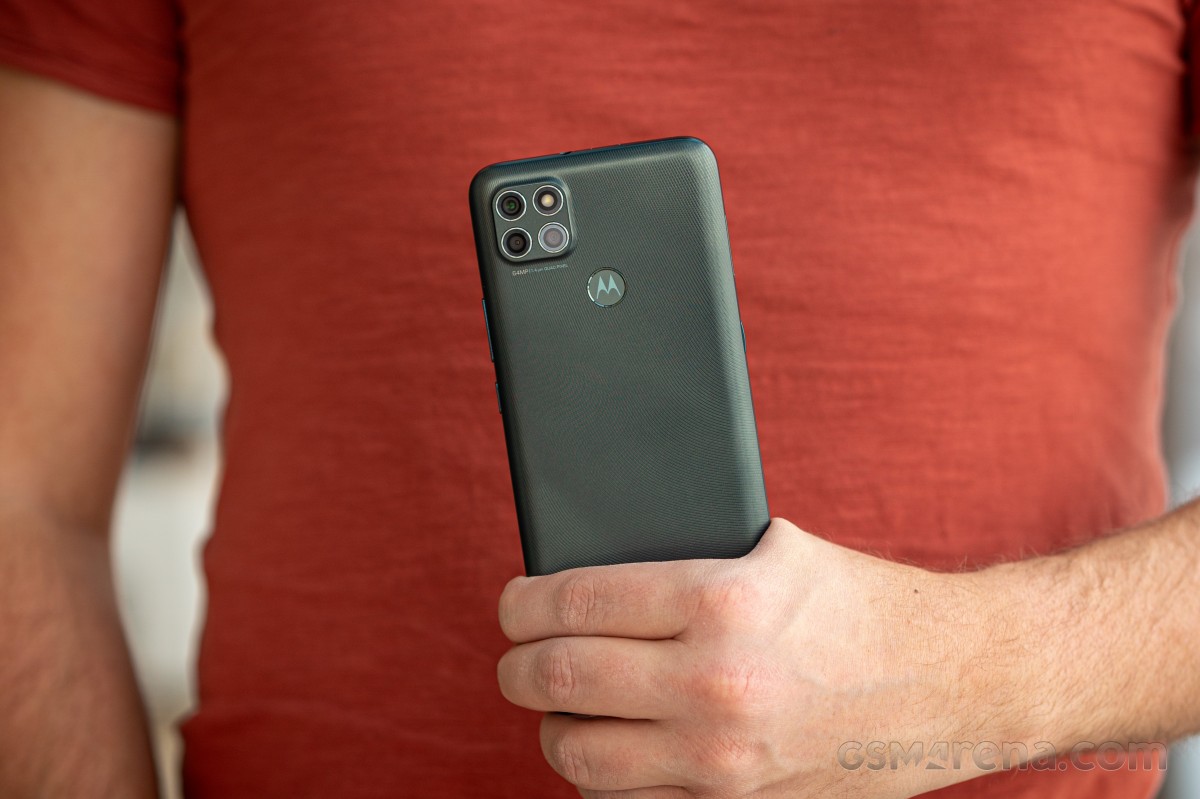 The triple camera sits on a separate and slightly jutting glass piece, and it contains the 48MP primary, the 2MP macro, and the 2MP depth camera, plus a single LED flash.

The rear-mounted fingerprint scanner is always-on and typically fast. It works great - once your finger is registered and then recognized properly, the phone unlocks in a flash. It did misread our finger a couple of times, but we are not sure whether this was due to dirt, the thick silicone case got in the way, or if it was the sensor's accuracy to blame. 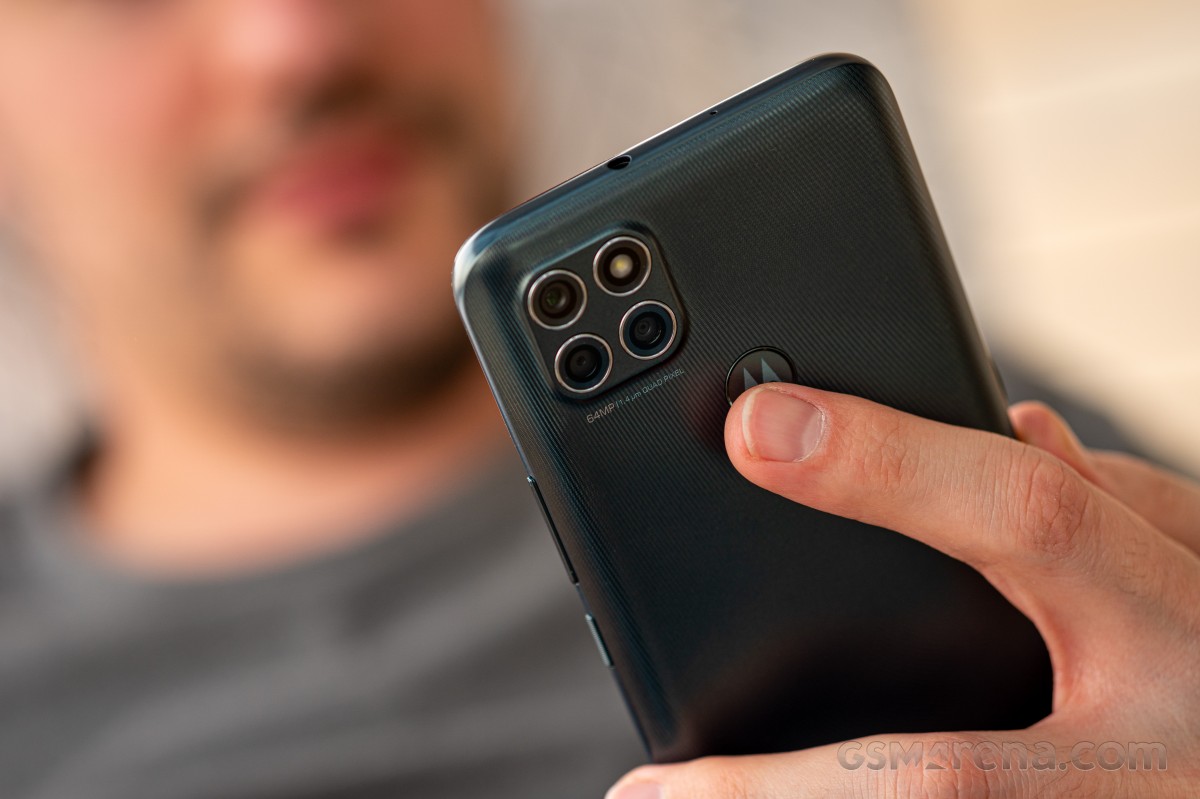 The phone's left side has a hybrid-SIM/microSD tray and the Google Assistant key. It appears you can't reassign this button's function. 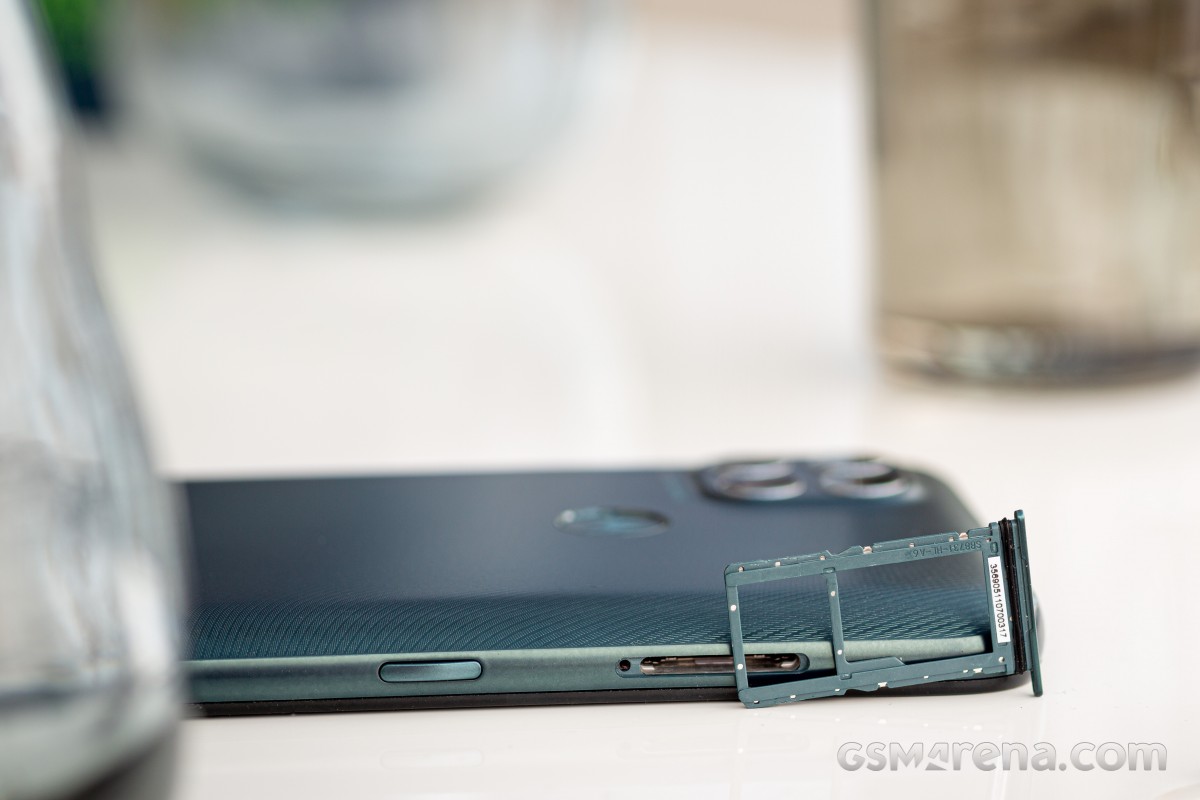 The power/lock key and the volume rocker are on the right.

The top has the 3.5mm jack and one of the mics, while the bottom packs the mouthpiece, the USB-C port, and the speaker grille.

The right side • The top • The bottom 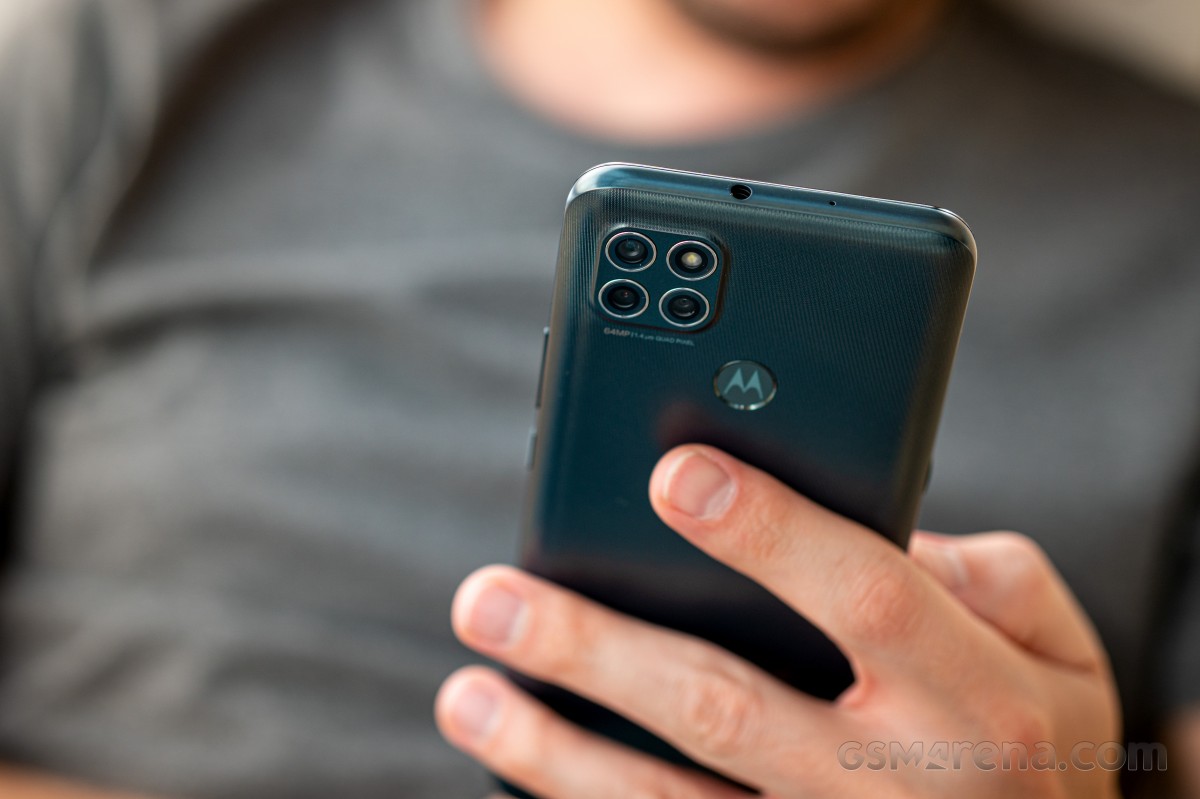 The Moto G9 Power is a sizable smartphone, sure, but it doesn't feel bulky or heavy. In fact, it is easy to use and operate, has enough grip, and fits well enough in most pockets. It sure isn't a small handset, but for its screen and battery sizes, we'd say Motorola did the best it can do, and it worked well. And we do appreciate the extra sense of security that gives its water-repellent coating.

It was performing so well, suddenly it failed to get charged up.service center guys can't locate the problem.within 9 months it's gone!

Happened to mine after a few months. Fixed for 25GBP in local phone shop

Problems being reported about suddenly not being able to charge these and them dying. I can verify this as I have a dead one after 20 days.