The gallery in Android 4.4.4 KitKat is called Photos. Upon opening the app you'll see two tabs - Camera and Highlights. Above those two tabs you get the Movie, Search and Settings shortcuts.

Creating a movie within the gallery

There is also an Auto Awesome section. It is something like a smart gallery that combines similar photos and videos in a cool way - it either exports a collage picture or a motion gif. If you like the combination the gallery has made for you, there is a dedicated shortcut to save the new picture in the gallery.

The old gallery is also on board. The Default view of the gallery is Albums, the first of which is always the Camera album, which has a camera overlay icon too. Rather than the familiar stacks, the app uses a grid of photos, two on a line.

The video player has retained its stock Android interface. Like last year, Motorola has added much better codec support than the one found in Nexus devices. The video player is now perfectly usable out of the box - it plays a host of formats, which include H.263, H.264, MPEG4, VC-1, and VP8.

You can also wirelessly share videos with a Wi-Fi enabled TV. The feature relies on DLNA technology to connect and the Miracast protocol for streaming. It's another feature most customs launchers had, but is only now making its way to the platform itself.

Google Play Music is the default music player. It features Listen Now feature, which tries to determine what you like and the sequence of your track-changing so that it can start offering you music you might like to play next.

Now playing screen • the notification area and the lockscreen

There's an FM radio on board too. It users wired headphones as an antenna and offers clean, intuitive interface.

The stereo speakers of the smartphone offer quality sound even at max volume. They are loud too, though far from the BoomSound setup of the HTC One family.

The Motorola Moto G (2014) performance in our audio quality test was a step forward from its predecessor in terms of purity although it wasn't any louder. The 2014 version of the handset did show slightly better frequency response as well as get rid of all the distortion.

When connected to an active external amplifier the Motorola Moto (2014) showed great dynamic range, signal-to-noise ratio and stereo crosstalk. Its frequency response was also spot on and there was no distortion, leaving the only average volume levels as the only not-excellent bit of its performance.

The good news is, besides the extra stereo crosstalk, there's virtually no degradation when you plug in a pair of headphones. The volume levels remained only average here, but that still makes up for an impressively solid overall performance.

And here go the detailed results so you can check them out for yourselves. 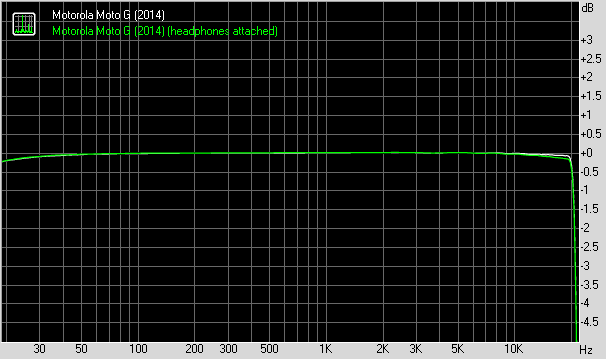