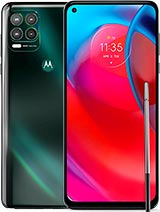 Coming from an LG V40 due to boost mobile network incompatibility, it's not a terrible phone. "Free" plus activation and $5 more a month for 5g service.

It's slower, the screen quality is worse, no DAC but at least it still has a headphone output. Was surprised to see it supports LDAC bluetooth codec so the wireless audio is actually very good. Low 4gb RAM is noticeable. It forgets things left in the background. So if you were filling out a form or something and leave it in the background, everything you entered will be gone when you come back.

The camera is pretty crappy. It takes decent pictures sometimes but video is limited to 1080p, 30fps, no high framerate or slow-mo modes.

Eggy, 02 Mar 2022who is your carrier?My carrier is Cricket. As of this writing they are offering the Moto G Stylus 5g 2021 for $39. I'm not sure if this includes the activation fee and taxes, etc.
I've had the phone for 2 months now.

The phone works well. The biggest issue with the phone is that the volume control is placed right above the power button on the right side of the phone. The two buttons are right next to exact other, about 1/8" apart, so it's very easy to accidentally press the power button when trying to change to volume. The other issue is that it uses tempered glass and not gorilla glass.

I just ordered this phone (4GB Ram/ 128GB ROM) for $90 USD brand new. I haven't had a phone this cheap in a really long time, and I'm worried this is going to be a bad experience considering how everyone is trashing it. It seemed better than all the other 'free' phones my carrier had on offer, but I am nervous about the fact it has unbranded glass instead of Gorilla glass.

PapaPsych, 22 Feb 2022I like it so far, got it for "free" from my carri... moreExactly. I too was offered the Moto 5G stylus 2021 by Boost Mobile for free, for the for the account of a family member who allows me to piggyback. They said free and I checked with them about any fees whatsoever and they said there were none. And I went to the first boost dealer near me because boost headquarters told me I would have to go to a boost distributor. The first one had only the 4G option because the Boost ad which contacted people told them they were offered either a 4G Moto pure or power, or they were offered a 5G Moto stylus. The first dealer told me no other boost dealers in town had the 5gs so I would have to tolerate a 4G. I quickly learned he was lying. I then went to a boost distributor and paid under $57 for the $35 activation fee and the $15 SIM card fee. I learned they charged my family member $7 a monthly for phone insurance which I canceled. So you're telling me this means that must be a common boost policy and it wasn't on the part of dishonesty of the distributor. I was recommending this to people because many people who received the offer believed it to be a hoax.

WHAT I WOULD LIKE TO KNOW NOW... Does Boost Mobile charge activation fees for their Alcatel Joy Tab 2 tablets for people who get them through the affordable connectivity program?

Boost Mobile has one of the best tablets for the affordable connectivity program behind Terracom Wireless, who gave out a Samsung sm-t307 tablet a 2020 tab a 8.4 inch tablet worth nearly $300. Tara com Wireless gave these for $10 and one penny without a shipping fee and without an activation fee.
I would like to know if Boost Mobile charges any extra fees for people who receive the affordable connectivity program and purchase a joy Tab 2 tablet through the ACP program?

I would like to know also if anyone knows whether Boost Mobile will require a person to commit both their Lifeline benefit and their ACP benefit to get one of these Alcatel Joy Tab 2 tablets?

Thanks in advance for any information.

I honestly have never been disappointed with Motorola. My favorite was a 50$ budget phone. It was a legend in it's on time. R.I.P.

SamiG, 27 Nov 2021I'm reading these comments thinking well who thumb co... moreThis place is for comments about the phone good or bad. Your post makes no sense. And your understanding of people and what they can and cannot purchase also appears to be quite limited.

Riki Ricardo, 22 Jan 2022Not the greatest phone. However, I did get an incredible de... morewho is your carrier?

For this phone? Even tho its not the greatest but since lg phones r no longer exsisted. I like much better my stylo 6 coss ever since lg stop making their phones, lg phones has lots of glitch at the end n im glad motorala did good job tho not the best but not the worst either..

I like it so far, got it for "free" from my carrier, they tried sticking me paying insurance but I canceled that lmao. The Screen is big and can play full 1080p videos. The Qualcom chipset is good enough to play video games, but that really drains the battery fast. The camera seems very nice to me. The fingerprint scanner is in just the right spot for either of my hands for quick phone access. I Don't know about the durability yet I don't know what kind of glass its made of so I have been gingerly with it so far. It has a headphone jack to, that was one of the reasons I kept my old phone for so long. But honestly if I had to pay for it myself I'd of opted for spending more money on a different phone.

No issues with mine whatsoever. Also had to force upgrade from a S7 Edge due to 3g shutting down on Cricket. Got this phone for free. Runs laps around the S7 Edge. More than 3x the raw power output. Not sure what others are complaining about.

Crap phone. Forced to pick a new phone because att/cricket don't have 4g bands my OnePlus 6 has and 3g going away. Got this one for free. My old OnePlus 6 is way older yet still performs faster, has more features, better constructed body, and charges way faster then this piece of crap. There are older phones out there that perform circles around this phone. Time to change carriers it seems.

Not the greatest phone. However, I did get an incredible deal for the phone, especially since I paid $70 TOTAL (Yes, Seventy US Dollars TOTAL) for the phone, a new case, activation fee and taxes. And my monthly rate of $35 did not change.

why do my phone keep shuting off doing my conversations

Fresh page , 09 Aug 2021Why Motorola phones they don't have front flash light ... moreI have this phone the moto g stylus 5g it's awesome! and it does have a front facing flashlight for video chat and taking pictures! It even has a feature if you shake the phone back and forth it turns on the back light! I don't know why this website doesn't mention the front facing flashlight. But it does have one!

willy, 24 Dec 2021Really disappointed with this phone. Went from a note8, whi... moreFor the transfer can use Google account

Really disappointed with this phone. Went from a note8, which I realize was getting old, no updates etc, to this because cricket is discontinuing 3g. Can't handle a major expense right now. Phone won't play sd card, cricket person couldn't transfer contact list said I'll have to do it manual. Will never buy another Motorola product again.