The Moto X4 ships in a cardboard box, its contents covering all the basics. Our unit came with a TurboPower 15W charger, but Motorola product pages say that it varies by region - some folks may get a more modest adapter.

Other than that, there's a USB cable and a headset - not a very fancy one either, but you're all set right out of the box, that's for sure.

The Moto X4 measures 148.4 x 73.4 x 8mm, which is about right for a phone with a 5.2-inch display these days. That said, the Nokia 7 is 7.2mm shorter and almost 2mm narrower, so it may be worth looking into if you're choosing the 5.2-inch diagonal over 5.5 inches specifically for compactness.

Others like the Huawei P10 Lite and HTC U11 Life are closer to the X4's footprint, the latter actually being taller - a minuscule 0.7mm taller, but still. The Galaxy A5 (2017) is the narrowest of this impromptu upper-midrange round up at 71.4mm wide, a negligible 0.1mm less than the Nokia. The Galaxy is as tall as the P10 lite at 146.5mm, 1.9mm shorter than the X4.

We had almost forgotten the Samsung Galaxy S7 (non-edge), but its design lives on in the Moto X4. That is, you start to see the resemblance if someone points it out - it's not necessarily an immediate 'copycat!' reaction.

The aluminum frame is finished to a fine satin sheen and ends on a shiny chamfer on the display side - the S7 had the same accent on its back too. The back is curved towards the sides in a similar fashion making the device look thinner and feeling so in the hand. 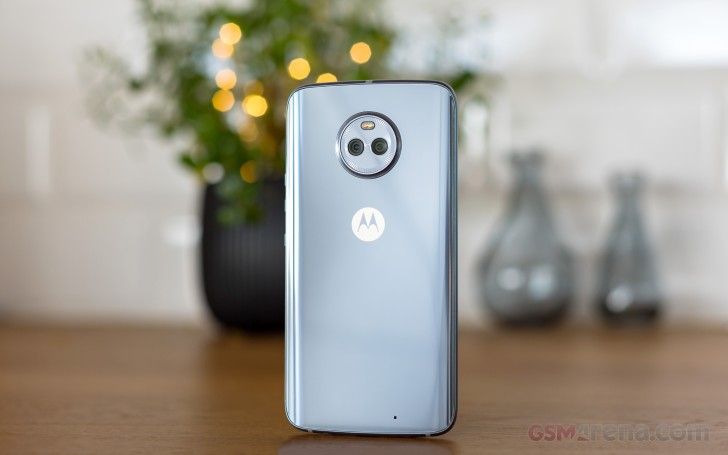 The curve, however, also means there's no MotoMods support on the Moto X4. Or rather, once it was decided that the X won't take snap-on accessories, they figured they could make it curved. In any case, if you want the add-on versatility of Motorola's MotoMods you need to look at the Z-series.

The Moto X4 is covered with Gorilla Glass 3 on both sides, and in the Sterling Blue version we have here the glass is painted underneath in such a way that it plays with light and turns from blue to gray depending on how light hits it. This is the hero color, and we only got to see the (Super) Black version at a dimly-lit venue, but we reckon it isn't as flashy in daylight as the Sterling.

The watch bezel-like camera bump on the back is a stunner itself - the border has a radial pattern while the inside is all about concentric circles. This clash of patterns is really quite attractive and unique, though some might find the upside-down smiley face a bit depressing.

The mic pinhole, on the other hand - we can't picture anyone liking that thing. Then again it would probably be nigh invisible on the black version. From a practical perspective, however, what good is a secondary mic for in-call noise cancellation if you're going to have your hand blocking it at all times? Wait, there's a third one on the top plate - all is well. 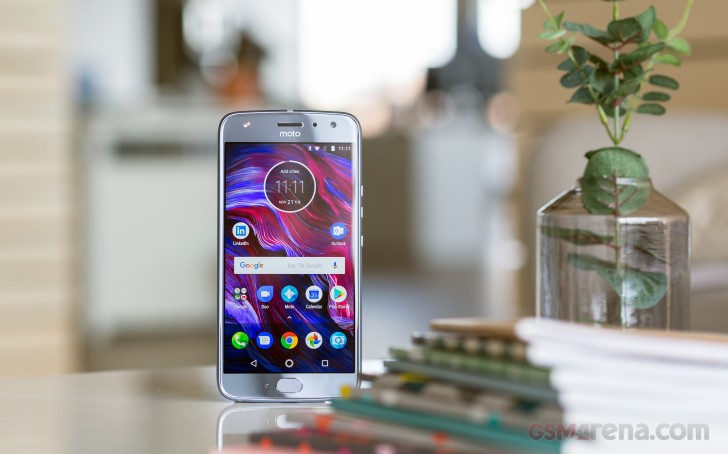 There's another pinhole of the same sort on the front - for the primary mic. That one is mostly safe from being covered when talking, and is less of an eye sore on the facade where there are all sorts of cutouts. Before we get to those, let's mention the front mounted fingerprint sensor - it's generously sized and can serve more than that one purpose of unlocking the Moto X4. More on that in the software section. Oh, we should add it's not a button, it doesn't click.

Above the display there's the earpiece front and center. It moonlights as a loudspeaker - a single one (boo), but a front-firing one (yay). To the right there's a pair of sensors (ambient light and proximity) and the front facing camera.

In the top left corner you'll find the front facing flash - a single LED one vs. the Moto Z2s' dual setups. Now, in between the flash and the earpiece there's another LED, one that would serve for notifications on an ordinary phone, but on the X4 it's disabled because of the MotoDisplay feature. It's not the same thing, Moto! Apparently the LED only lights up when the battery level is critically low and that's it. 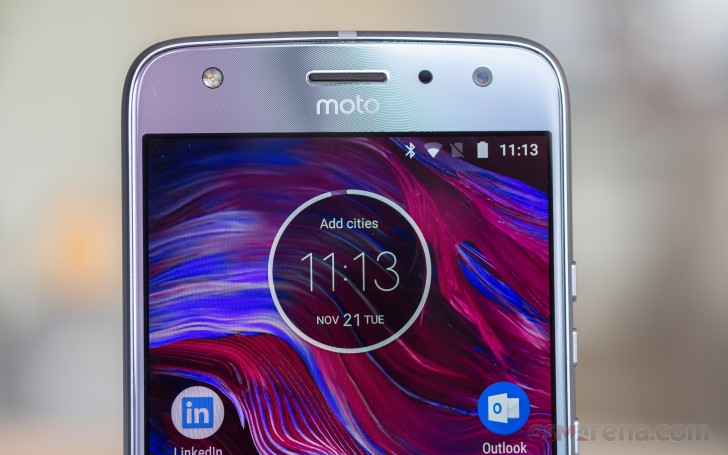 The power and volume buttons are on the right side of the phone which combined with the identical size is a recipe for wrong clicks. To combat that the engineers have added a texture to the power button and placed the discrete volume buttons in a common groove in the frame - it's something, though not as fool-proof as, you know, buttons on different sides of the phone. The power button in particular could have been larger too.

All buttons on the right • Texture on the power button, groove between the volume buttons • Nothing on the left

Up top you'll find the card slot. Our unit takes two nano SIMs or a nano SIM and a microSD card, but not all three at the same time. Single SIM versions of the Moto X4 will obviously not accept two nano SIMs, but the option for storage expansion remains. The card tray has a rubber gasket to make sure no water goes in through here - that IP68 rating needs some dedicated hardware too.

The USB-C port is at the bottom and the 3.5mm jack is next to it. Scattered around here are the regulatory labels - always there, yet well out of sight, brilliant.

Top of the phone • Card slot and tray • Bottom • USB-C, 3.5mm jack, and the regulatory markings out of sight

It's a compact phone, the Moto X4, at least by 2017 standards. It's smaller than the dominant 5.5-incher and is thus more pocketable, yet with its classic ratio offers the same 16:9 viewing area as a 5.8-inch Galaxy S8. It's also much more easily manageable than the Moto Z2 Play or Force.

The white on the screen is tot bluish, but redish (pink)!

Only average overall IMnsHO. Batt life does not perform as stated. Touchscreen is so sensitive it constantly doing things I did not intend like dialing a number I did not select or actually changing settings somehow (yeah, sounds Orwellian but I can...

I've bought two of these phones brand new, warrantied the, am using the return. The second crapped out within a week and I'm planning to send it in for warranty. The specs are top-notch, best one could possibly ask for in this price class. Hardwa...