6.3-inch LCD on the One Action

The Motorola One Action packs what appears to be the same display as the One Vision before it - a 6.3-inch IPS LCD in a tall 21:9 aspect ratio. Resolution is 2520x1080px which works out to 435ppi but Motorola specifies 432ppi, so it's probably slightly larger than precisely 6.3 inches (yes, immaterial, we know). 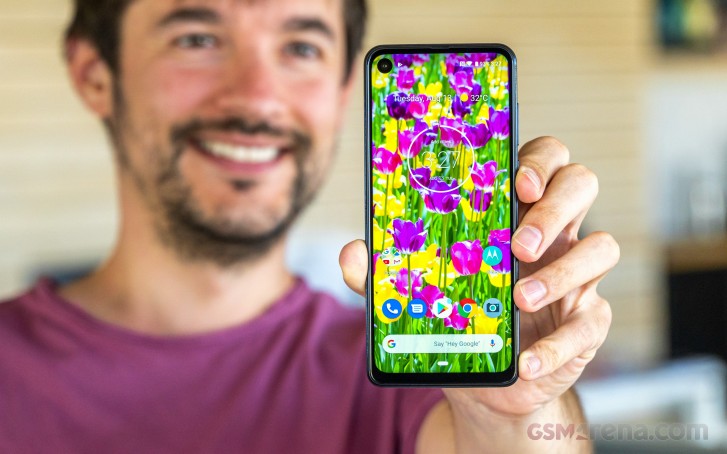 We measured a maximum brightness of 459nits on the One Action, slightly less than the One Vision's result. Unlike the other model, here we didn't manage to get a bump in Auto brightness, small as it was on the One Vision. Contrast is decent for an LCD at around 1200:1, but we've seen LCDs in the 1600-1800:1 range - not necessarily high-end ones, so the One Action is okay, not great. It does fare alright outdoors - we had no issues framing our daylight shots.

The One Action's color reproduction is handled in the native Android Pie way with Natural/Boosted/Saturated modes. The out-of-the-box Saturated setting returns an average deltaE of 6.7 when examining color swatches against both sRGB and DCI-P3 targets and 7.7 for Adobe RGB. Natural isn't accurate to sRGB either - average deltaE is 6.5. In all modes, the whites are particularly blue with a deltaE in the 12-13 ballpark.

The Motorola One Action is powered by the same 3,500mAh battery as the One Vision. Since it also has the same chipset and display as that phone, we expected similar if not identical results, and the Action's numbers did indeed end up very close to the Vision's.

That's not strictly a good thing in this particular case - at around 10 hours in both of our screen-on tests the Action's endurance is decent, but not really competitive. In video playback, for example, potential competitors like the Realme 3 Pro (15:01h) and Galaxy A50 (15:49h) last a lot longer, and also comfortably outlast the Moto phone in web browsing (at 13:48h and 12:16h, respectively). The One Action's voice call result is on the low side of the spectrum too, at around 18 hours. Add to that the unimpressive standby figures and we arrive at an overall Endurance rating of 66 hours. 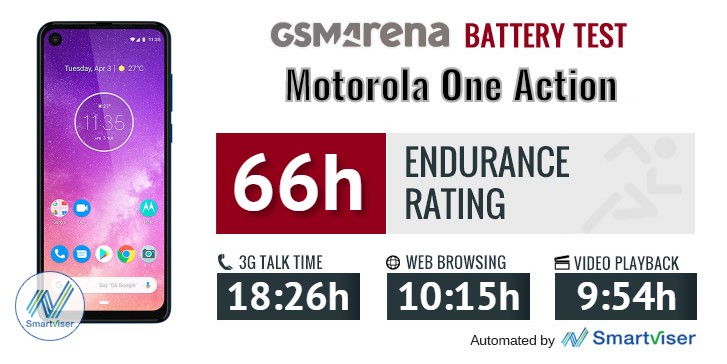 Our battery tests were automated thanks to SmartViser, using its viSerDevice app. The endurance rating above denotes how long a single battery charge will last you if you use the Motorola One Action for an hour each of telephony, web browsing, and video playback daily. We've established this usage pattern so that our battery results are comparable across devices in the most common day-to-day tasks. The battery testing procedure is described in detail in case you're interested in the nitty-gritty. You can check out our complete battery test table, where you can see how all of the smartphones we've tested will compare under your own typical use.

Charging the Motorola One Action isn't a particularly quick process. The bundled 10W adaptor delivered a full charge from flat in 2:27h with 30% showing on the battery indicator 30 minutes into it.

In contrast, the One Vision shipped with a 15W adapter that is somewhat faster - 38% in half an hour, so the One Action could theoretically be topped up faster with more powerful chargers than the one in the box though we didn't try this out ourselves.

The Moto One Action has a single loudspeaker on the bottom - a fairly typical arrangement. It scored a 'Very Good' rating in our loudness testing, a notch below the One Vision, but still plenty loud. It also sounds good subjectively and is more than adequate for playing videos and such, provided you don't block it with your fingers which is a consideration given its placement.

The Motorola One Action started off impressively in our audio quality test posting the expected excellent scores with an active external amplifier and delivering very high volume levels.

Even better, it suffered next to no degradation when headphones came into play. The output remained very loud, and the increase in stereo crosstalk was far lower than average. A great showing by the mid-ranger.