The Motorola RAZR MAXX comes in a standard box that contains all the essentials: a compact charger that uses the microUSB cable, a single-piece headset with no extra earbuds and the usual user guides. The earphones are different than the ones that came with the RAZR XT910.

While the microSD card slot is empty (Verizon throws in a 16GB card), the phone features 16GB of built-in storage (double the Verizon model).

The Motorola RAZR MAXX is built using the same blueprints as the RAZR XT910, except for a slight adjustment in the thickness. The design is distinctive and stands apart from the Samsungs and HTCs, which earns scores for personality.

Instead of the all too common rounded rectangle design, the RAZR MAXX is beveled at the corners and the piece of Gorilla Glass is somewhat of a hexagon. The Kevlar back is even more recognizable and brings carbon-fiber-like aesthetics to the phone (many luxury items, including high-end cars, have a carbon fiber option).

The Motorola RAZR MAXX is distinguishable from the RAZR XT910 only by its 1.9mm thicker waistline

On the other hand, it's not easy to tell apart from the non-MAXX model, which is an advantage of sorts - people who got the XT910 will be a little disappointed they didn't spring some extra cash when you tell them how often you recharge your RAZR MAXX.

Above the display we find proximity and ambient light sensors along with the 1.3MP secondary camera. A notification light will blink blue in case of missed events. The earpiece is also here, below the Motorola logo, finely etched in a metal plate that proudly stands out against its black surroundings.

Underneath the display are the traditional four capacitive keys in charge of Android navigation - Menu, Home, Back and Search - and the mic pinhole.

The top of the Motorola RAZR is where the three wired connectivity ports are lined up within a nice strip of rubberized plastic. The 3.5mm audio jack, a microUSB port and the microHDMI are all uncovered and risk getting filled with dust over time.

The left side of the handset is very tidy, only featuring the microSIM and microSD card slots hidden under a shared plastic lid. The memory card is very easy to put in and pull out while the SIM card is near impossible to eject after it's been inserted. We had the same issue with the regular RAZR when we reviewed it, but we weren't certain if it's a design flaw or an issue with our unit. Having the same issue now leads us to believe it's just poor design.

The microSIM and microSD slots are under a protective flap

The bottom of the Motorola RAZR is completely bare.

The back on the other hand is rather interesting. The phone is a single solid piece - there's no battery cover. The Kevlar rear has a distinctive pattern (it looks kind of like carbon fiber) and a nice, rubbery feel to it, which improves grip.

The top part of the back protrudes slightly to accommodate the 8MP camera, the LED flash and the loudspeaker, but it's not as prominent as on the anorexic RAZR XT910, which actually improves the phone's feel in hand.

Also on the back is the noise-cancellation microphone placed right opposite the mouthpiece.

The back of the RAZR looks like it means business

The battery isn't user replaceable but we don't think you'd ever need to carry a spare with the RAZR MAXX, so it's not an issue. The capacity of 3,300mAh is an unmatched feat in mobile phones, let alone at a sub-centimeter thickness.

Officially, the phone is rated at 607 hours of standby and 17 hours 40 minutes of talk time. We're running our own battery tests, but those will take a while to do properly (draining that huge battery is not an easy task). We'll make the numbers available here as soon as we have them.

Update, August 28: We're finally done testing the battery and you're about to find out why it took us so long. The Motorola RAZR MAXX with Android ICS shot past the results of the CDMA-packing DROID RAZR MAXX, scoring an endurance rating of 87 hours - the phone can last for days, even with heavy usage. The RAZR MAXX can last almost an entire day in 3G calling, 9 full hours of web browsing or over 16 hours of playing videos. Other don't even come close to these numbers. You can learn more about our testing procedure over here and the full battery test write-up over here. The Motorola RAZR uses a Super AMOLED screen that measures 4.3" in diagonal and dominates the front. We've seen the display in many other phones and it's perfectly fine although perfectionists will scoff at it - the 256ppi pixel density is about average and the PenTile matrix suffers a visible cross-hatch pattern.

The screen offers deep blacks and great contrast the way only an AMOLED can and excellent viewing angles - there's no color or contrast loss at all. It's not very bright but the sunlight legibility is still quite good. In the end, it's a very solid display even if it cannot match the sharpness of current 720p screens.

You can find more information on our display test here.

We zoomed into the display using our digital microscope so you can get a better idea of how the pixels are arranged, and how big they are. What we saw was what we expected - a PenTile matrix with big red and blue diodes and small green diodes. 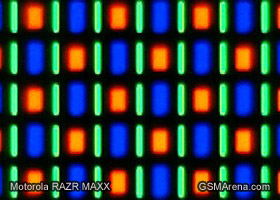 The Motorola RAZR MAXX under a microscope

The Motorla RAZR MAXX is reasonably pocketable and, we dare say, more comfortable to hold than the thin and top heavy RAZR XT910, which did feel a little awkward in the hand. We still maintain that the phone is a bit too tall and wide for its 4.3" screen, but unless your pockets are extra small it shouldn't be an issue (actually, given the choice we would have the RAZR MAXX stay the same size but with a slightly bigger display, say 4.5").

We do appreciate how durable the phone feels - the body is very solid (it helps that there are no detachable parts) and even cosmetic damage seems unlikely with that Kevlar coating on the back. The phone is splash resistant, which reduces the chances of water damage, but you still need to take care of the exposed ports at the top.

So far, the Motorola RAZR MAXX feels familiar, but has enough personality to keep our interest. It's likely to stay like that in the software section of the review, as the Moto-skinned Ice Cream Sandwich OS looks quite similar to the skinned Gingerbread that we experienced on the XT910.

"In the end, the Motorola RAZR MAXX is and will be the battery life king for at least a while. So, for people who ....., there aren't any real alternatives" Really ? ...no alternatives ? ..how about Philips W8555

After one year of use, battery capacity/effectiveness drops dramatically, holds approx. 40% of the initial time that was 2-2,5 day of normal usage. System is nearly suspended, nothing helps, shutting down nor reset. Great phone for 1 year...