The entry-level smartphone Realme C3 was introduced earlier this month, but apparently the company is about to launch an even cheaper device. A phone with model number RMX2020 was certified at Bluetooth SIG with the MT6769 chipset - that’s the Helio X20, introduced almost three years ago. 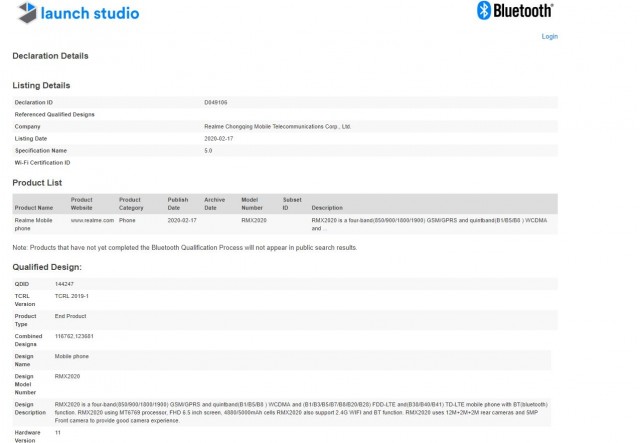 The RMX2020 certification at Bluetooth SIG

The phone has been certified at multiple organizations, so it definitely doesn’t look like a testing platform that Realme built for internal purposes. We even see the new device will have a 5,000 mAh battery and three shooters - 12MP + 2MP + 2MP, the latter two probably macro & depth sensors. The listing also reveals a 6.5” screen with FullHD resolution, accompanied by a 5MP selfie shooter.

This could be the Indonesian version of the Realme C3, or something like Realme C3i (not to be confused with Realme 3i) - we expect to learn more in the upcoming weeks.