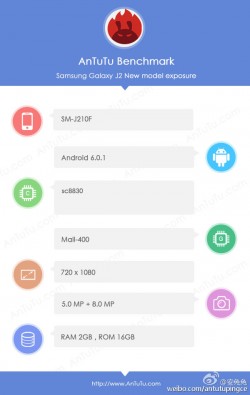 Samsung is working on refreshing the Galaxy J2 from last year with a new, 2016 version. We've seen this upcoming model in the Geekbench database yesterday, and that has revealed a couple of its specs. Now though the Galaxy J2 (2016) has also been spotted at AnTuTu, another Android benchmark.

This means more of its specs have been outed. The phone will feature a 720p touchscreen, an 8 MP rear camera, a 5 MP selfie snapper, and 16GB of built-in storage. Interestingly, this prototype got benchmarked sporting 2GB of RAM, whereas the one from yesterday only has 1.5GB. This probably means Samsung is testing different configurations of the new J2, before it settles on the final hardware.

Hopefully the Korean company will realise that it performs better with 2GB of RAM and will choose to go with that amount. There's also a difference in the chipset employed between the two benchmarked prototypes. The one from yesterday uses Spreadtrum's SC9830, which has 4G support and a 1.5 GHz quad-core Cortex-A7 CPU, while AnTuTu says the J2 (2016) comes with the Spreadtrum SC8830, which is limited to 3G connectivity and 1.2 GHz clock speed for its processor.

The Samsung Galaxy J2 (2015) will run Android 6.0 Marshmallow right from its debut, which should happen in the next few weeks seeing as how we're getting more and more leaks about it these days.

mobile features is very good but i want know price.

If it's at $150 even it's not worth it. Redmi 3 craps all over this thing at that price point.

Ok the repetition of samsung's product is becoming too much.