The new Microsoft Lumia 430 was officially announced today and it is yet another step in Microsoft's endeavor to get a firm grip on emerging smartphone markets. The dual-SIM handset will be hitting stores in India, the Middle East and Africa, Asia-Pacific, Russia, Kazakhstan, and Belarus sometime this April. And color options include black and orange.

It will bear a price tag of about $70, which should help it get budget-conscious and novice smartphone users. The specs sheet is definitely not impressive, especially by 2015 standards, but given the tight budget, Microsoft has actually managed to put together a decent device. 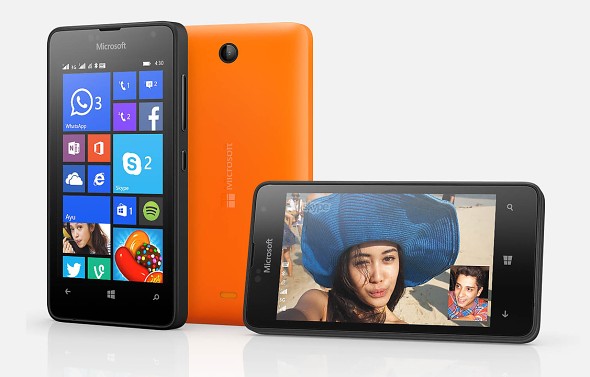 The Lumia 430 is powered by a rather outdated Qualcomm Snapdragon 200 chipset with 1.2 GHz dual-core processor, which is not going to ace any benchmarks, but should do the job without too much stutterting on a Windows Phone device. The good news is that in has 1GB of RAM, which means no apps will be left out due to RAM limitations.

It almost looks like this handset is Microsoft's upgrade to the Lumia 530. Just like it, the Lumia 430 has a 4-inch LCD screen, with a resolution of 800x480 pixels and a ppi of 235. Yet it comes with twice the RAM and internal storage has been bumped up to 8GB.

There is still a microSd card slot for up to 128GB more. Another improvement offered by the Lumia 530 is the front-facing camera, which is just a 0.3 MP VGA model, but is still better than nothing, but, sadly, the main shooter is only 2MP. A proximity sensor is also a nice update. 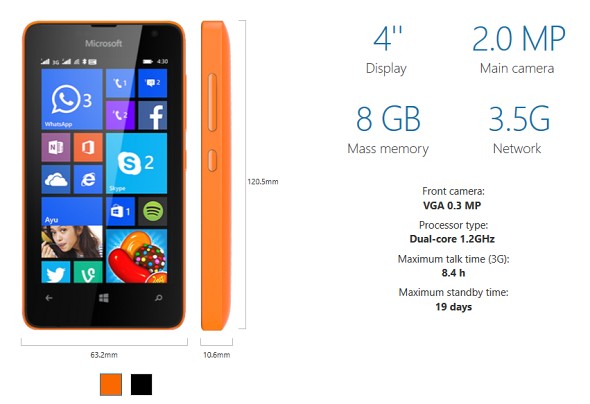 Jo Harlow, Microsoft's corporate vice president, had this to say about the new budget-friendly device:

People around the world have responded enthusiastically to our affordable Lumia range. We continue to invest in this segment to ensure that as many people as possible can enjoy signature Microsoft experiences, regardless of budget.The Lumia 430 Dual SIM continues our commitment to combining the right hardware, software, services and apps with the right price to give people a smartphone they can afford and be proud to use.

It looks like the Lumia 430 has a few right ingredients to become a hot seller in certain markets. And with Microsoft's promise to bring Windows 10 to all Lumia devices, the $70 investment sounds like a pretty good deal in the long-run.

I want to sincerely thank Microsoft for using their head for once and bringing out a CellPhone which is really cheap and smart at the same time. I have been waiting for this config for years now. I don't need a PC in my pocket rather a gently smart C...