Today iQOO is unveiling three models in the 9-series for the global stage, starting in India. There is some overlap with models already available in China, e.g. the iQOO 9 Pro is identical to the one in China. The iQOO 9 is all new, however, and there is also the iQOO 9 SE, which isn't entirely new, but was called otherwise.

This is not the iQOO 9 that launched in China, that one was much closer to the 9 Pro. This one arrives with a different chipset, screen, camera and battery. Basically, other than the name, the global iQOO 9 is a completely different from the Chinese one. 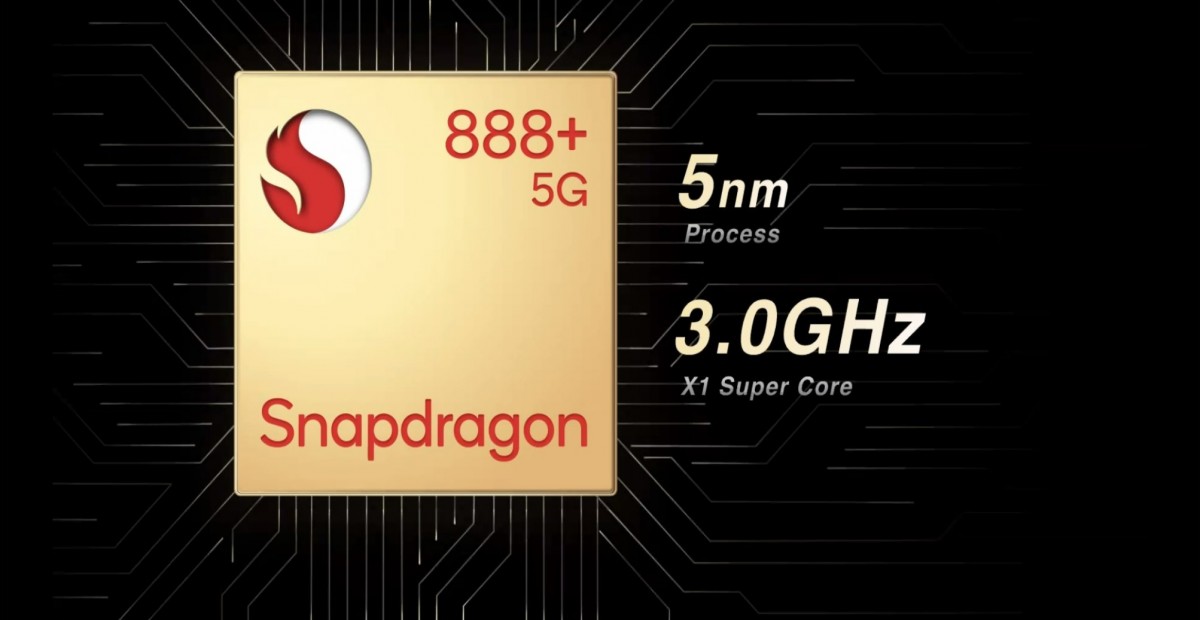 The chipset is cooled by the Full Coverage Vapor Chamber Liquid Cooling System, which the company claims drops the phone’s surface temperature by 4°C (and as much as 12°C for the chipset itself during heavy gaming).

The phone still runs Funtouch OS (version 12, based on Android 12), instead of switching over to OriginOS. It will receive OS updates for two years and an extra year of security patches (the same goes for the SE below). 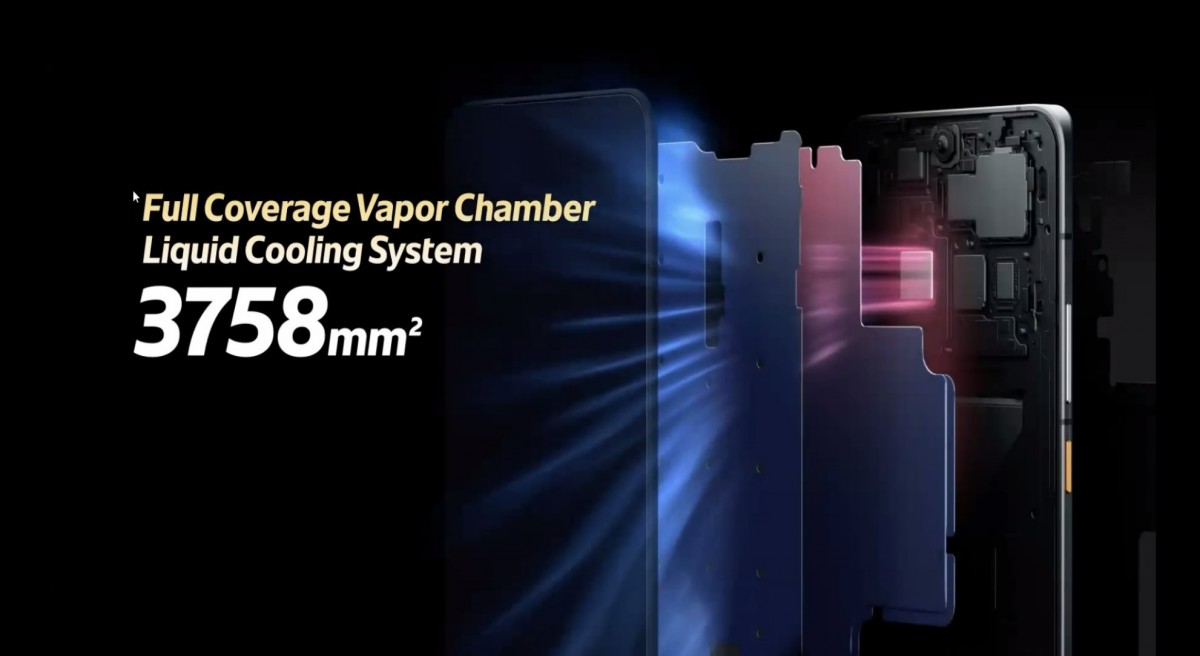 The AMOLED display is smaller at 6.56”, down from 6.78” on the Chinese model. It still has 1080p+ resolution and even an HDR10+ certification. The iQOO 9 supports the Dual Monster Touch controls that we saw on the iQOO 7 Legend – basically, the display is split into two zones and each can sense the amount of pressure you apply with your thumb. 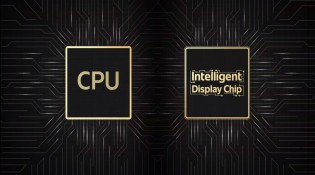 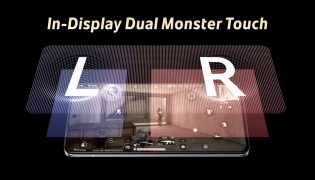 The display offers 120Hz refresh rate and 300Hz touch sampling rate with an Intelligent Display Chip. This chip can drop the frame rate of the game to give the chipset a chance to cool off. It does this by inserting intermediate frames to simulate 90 fps while the GPU only renders at 60 fps (this is supported only on PUBG for now). 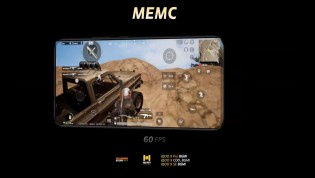 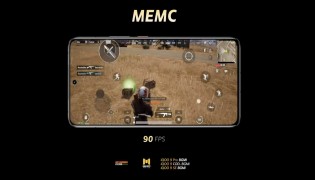 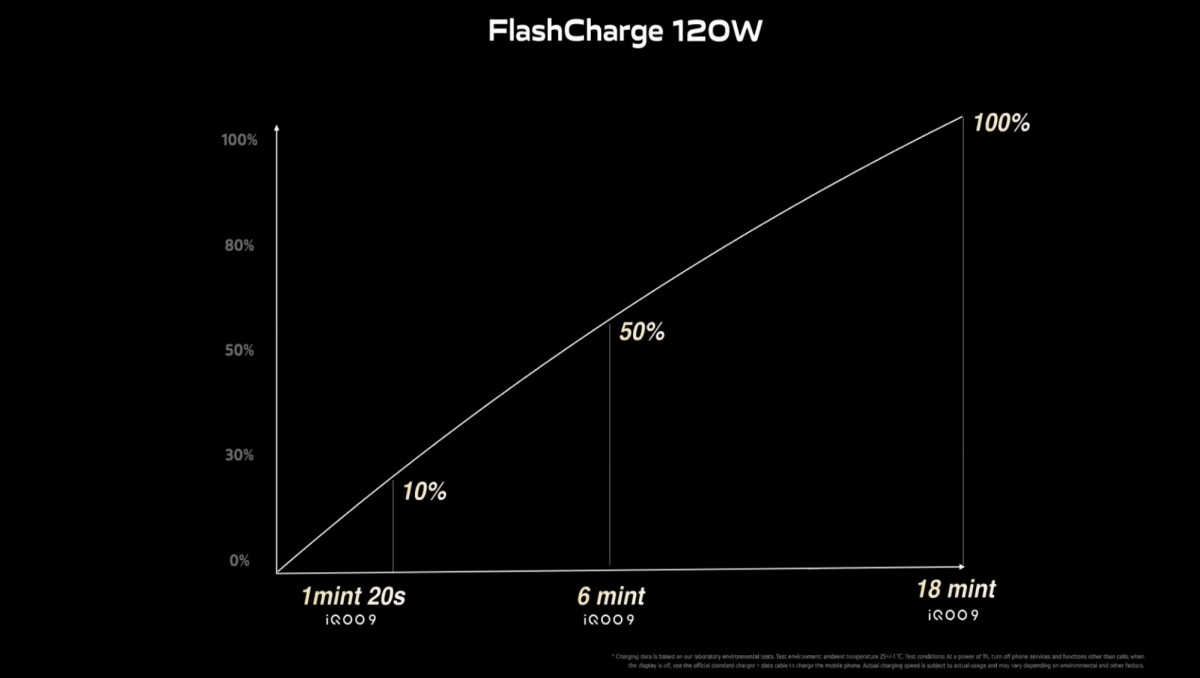 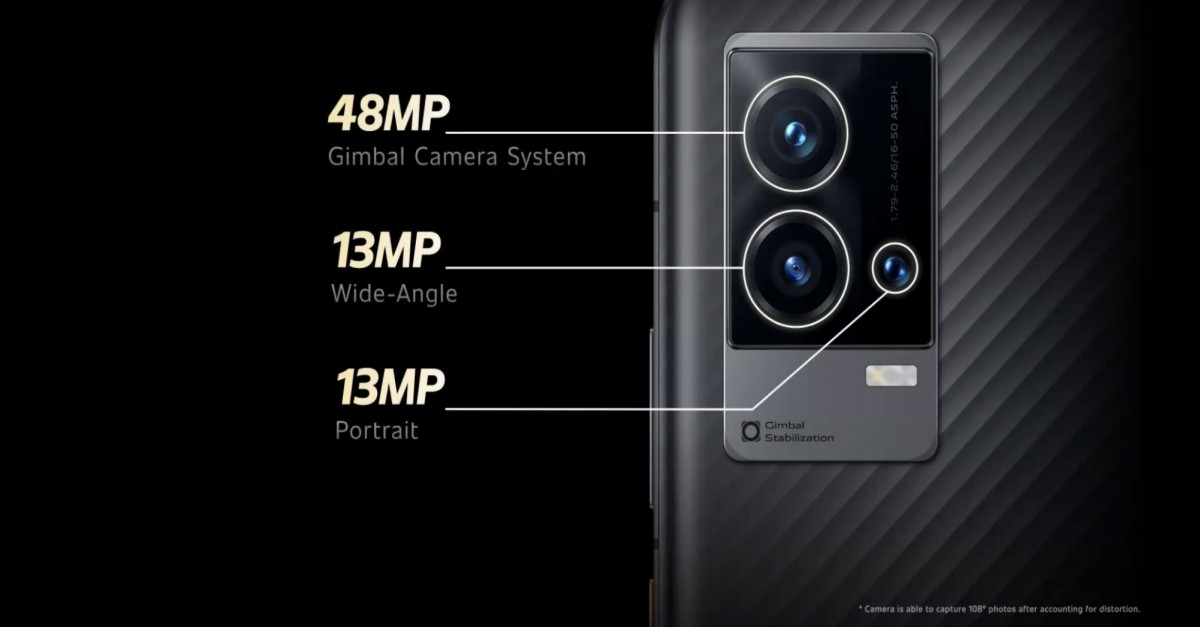 The vanilla 9 is available in three colorways: Alpha, Phoenix and Legend, the latter sporting BMW M Motorsport branding with the iconic triple stripe. 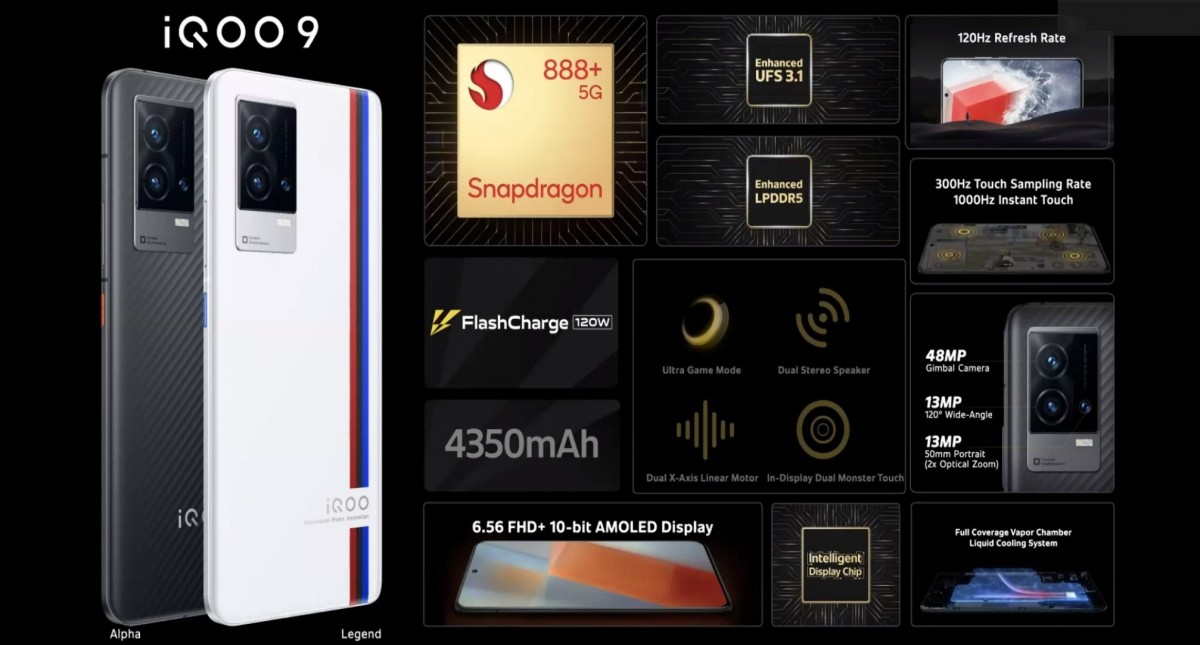 At first glance the iQOO 9 SE is a new model too, but actually its hardware lines up perfectly with the iQOO Neo5 S. This phone is powered by the Snapdragon 888 chipset (non-plus) and has the same 8/128 GB and 12/256 GB memory configurations as the 9. 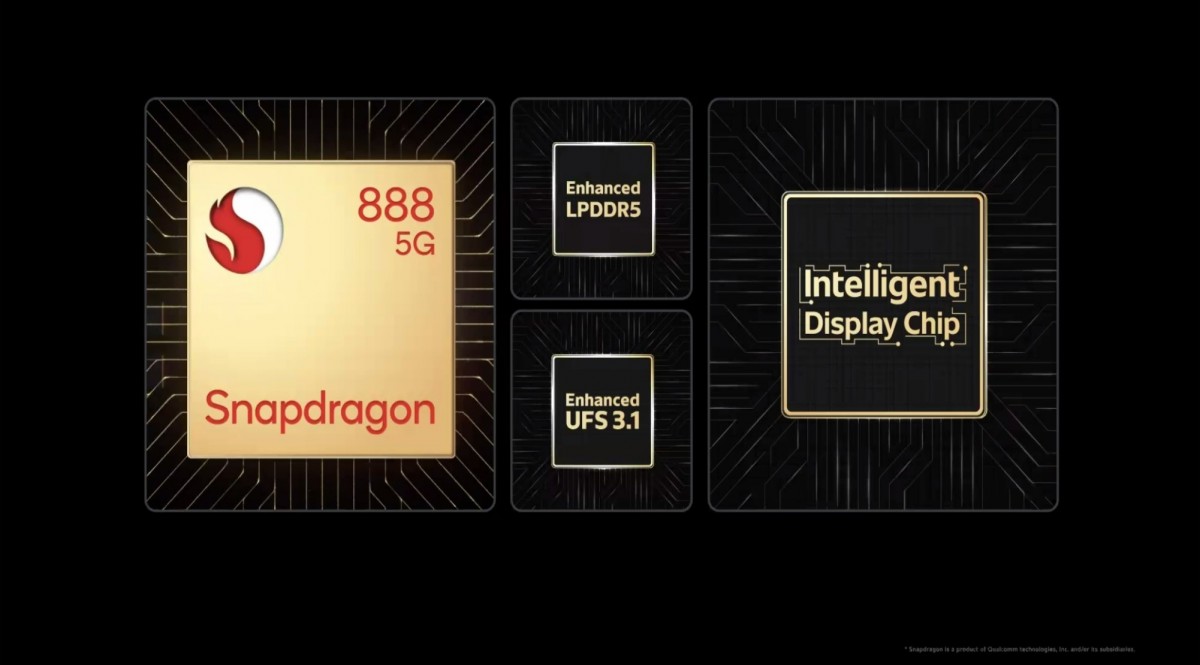 It also has a larger display than the vanilla model, a 6.62” AMOLED panel with 1080p+ resolution. It too is driven by the Intelligent Display Chip and offers 120Hz refresh rate plus 300Hz touch sampling rate. Both the 9 and the 9 SE have in-display fingerprint readers (optical rather than ultrasonic like on the Pro).

The camera setup is also more modest. It uses the same 48MP IMX598 sensor, though with a less capable OIS system. The 13MP ultrawide camera (120°) is on board, the portrait camera is not. By the way, these ultrawide modules can shoot macro at just 2.5 cm (1 in) distance. 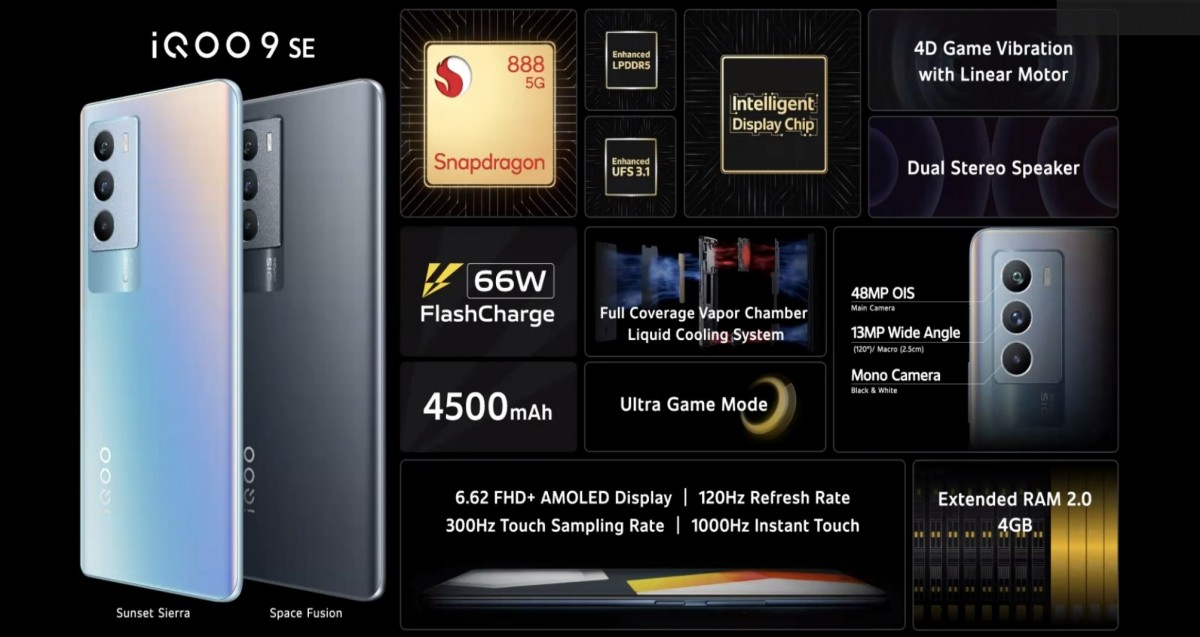 When it comes to the battery, the vanilla and SE models trade punches – the SE has a slightly larger power cell (4,500 mAh), but it maxes out at 66W FlashCharge.

In addition to smartphones, iQOO also announced the iQOO GamePad for global markets. It's compatible with the iQOO 9 series and connects with the phones through Bluetooth. 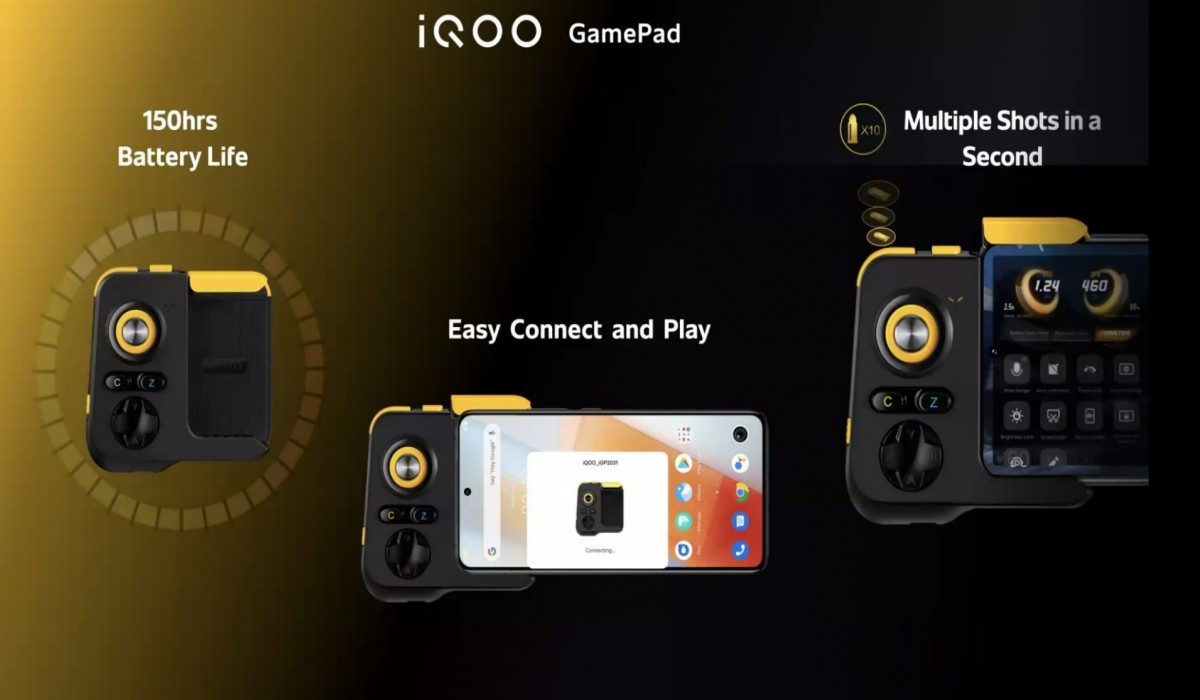 iQOO told us the GamePad currently supports Free Fire, Battlegrounds Mobile India (BGMI), and Call of Duty Mobile, but we might see the company expand the list in the future. 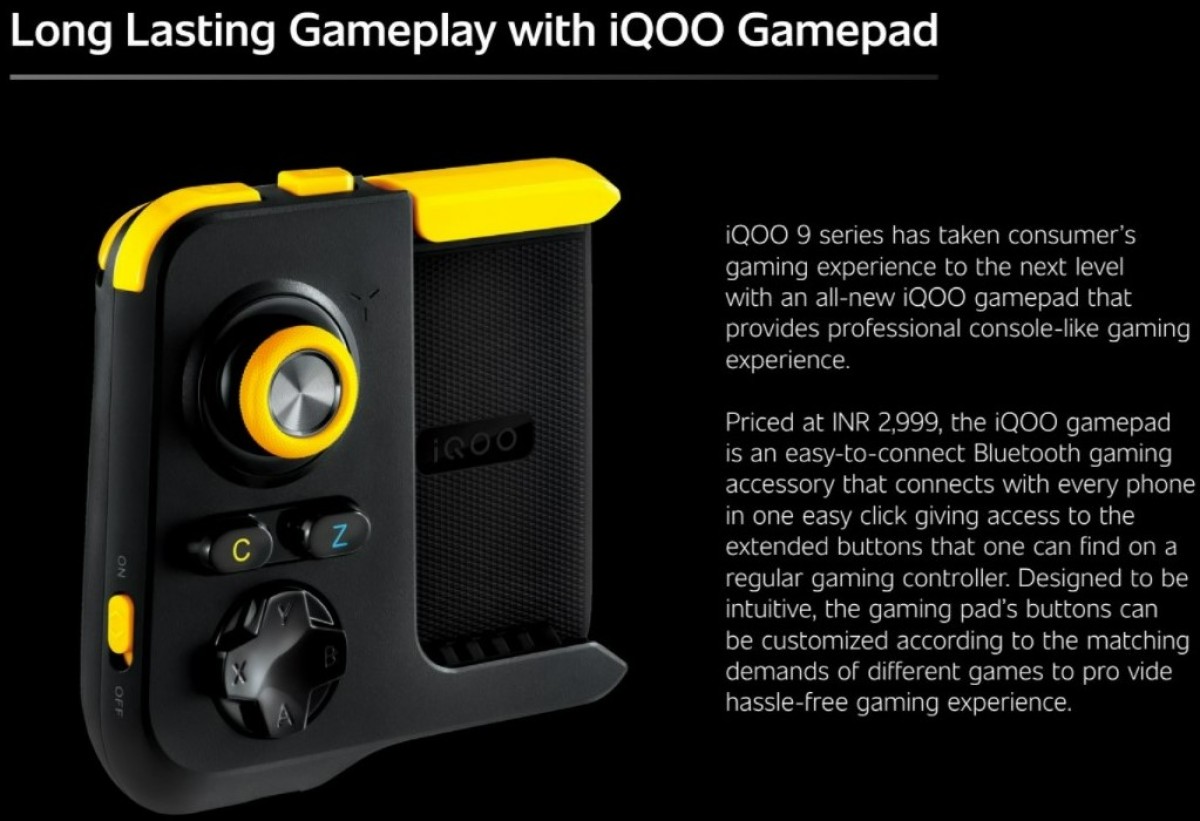 oh, yeah, you can imagine it is the real Android Authority... duhhhh...

I see. I don't follow these random Chinese subbrands, so i wasn't aware of that.

Are you the real Android Authority