New leaked image portrays Huawei Mate 10 next to its predecessor

Huawei may insist on saying the upcoming Mate 10 is not a smartphone, but it sure leaks like one. Following the huge leak from yesterday, which brought us press renders of the Mate 10 Pro, today a new image compares that device to the Mate 9 from last year, as you can see. 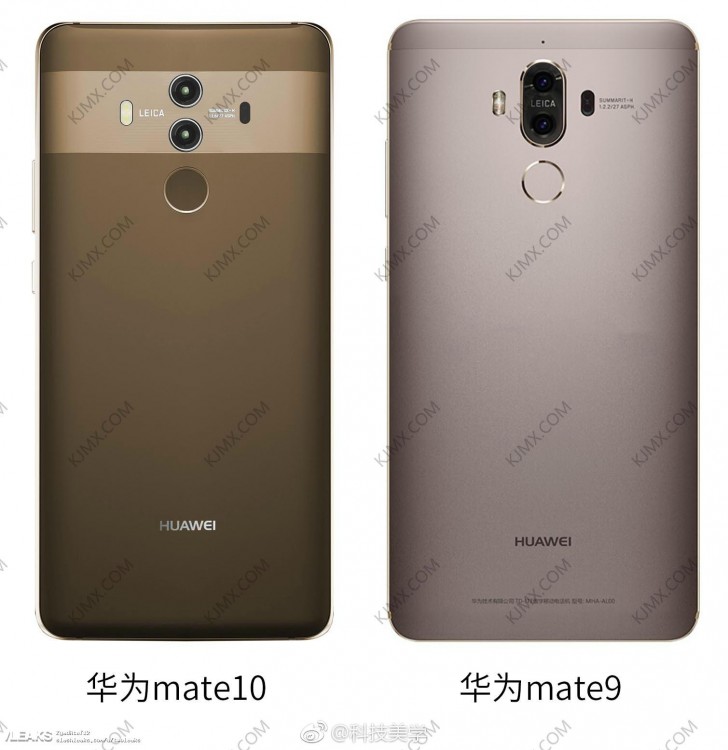 It's not clear if this is to scale, but if it is then expect the Mate 10 Pro to be slightly narrower and perhaps a tad shorter than its predecessor. The Mate 10 Pro has a glass back, dual rear cameras with Leica branding (and f/1.6 aperture at least on the main one), a fingerprint scanner under those, and a dual-LED flash.

It will be powered by the in-house developed Kirin 970 chipset, which has a dedicated neural processing unit that will enable AI features. Alongside the Mate 10 Pro, we're expecting a regular Mate 10 to launch, but also a Mate 10 Lite and a Mate 10 Porsche Edition.

Huawei Mate 10 Pro renders show the bezel-less front, the Leica dual cam on the back

The longer I look at that awful excrement brown, the more I get a serious nausea. As if that gaunt 18:9 wasn't awful enough already. Really sad that it got so much worse than the Mate 9. They should've used that limited edition red as regular col...

What was Huawei thinking when they designed the back of the phone? It looks awful. The Mate 9 Pro has a much, much better design.

The Mate 9 looks so much better- especially the camera module. That should have been retained on the glass strip instead of punching 2 separate holes