Oppo is already working on its early 2021 mid-range lineup, supposedly called Reno5. A specs sheet of one of the upcoming phones leaked on Weibo at the same time it also appeared on TENAA.

Apparently the next Oppo Reno5 will have a 64MP camera and offer support for 65W fast charging. It will also run Android 11 with the latest ColorOS on top. 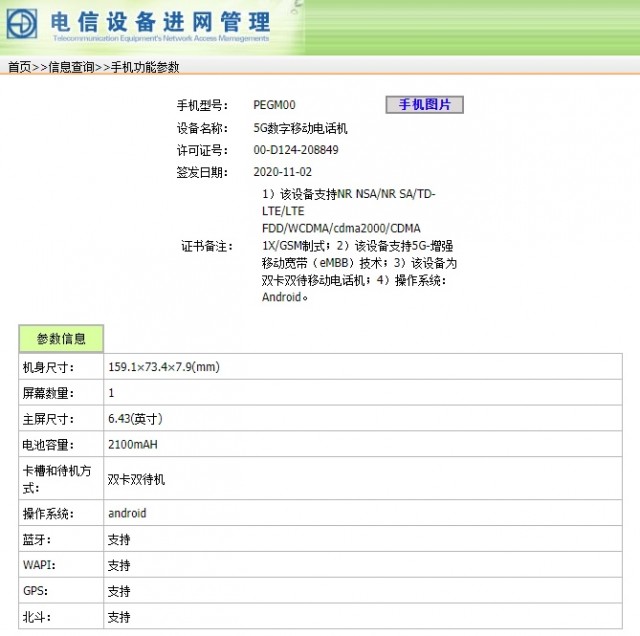 Two models (PEGM00 and PEGT00) have been certified, but they have the exact same specifications so it's likely two versions of the same phone. The papers confirm 6.43” screen, 4,200mAh battery, and 159.1x73.4x7.9mm dimensions.

The leaked specs sheet, shared by Digital Chat Station, adds that the screen will be an OLED panel with with a 60Hz refresh rate and 180Hz touch sampling rate. The CPU will be clocked at 2.4GHz CPU and one assumption is that it will be part of a Mediatek Dimensity 800U chipset with 5G support.

The main cam will be accompanied by an 8MP ultrawide shooter and two auxiliary 2MP sensors. The leak claims the battery is 4,300 mAh, but the discrepancy from the official listing at TENAA might be the difference between minimal charge and typical charge.

If the phone really arrives with Android 11 out of the box, it might be the first Oppo phone to do so - right now pretty much all devices from all price ranges ship with Android 10 and ColorOS 7.2.

Oppo K7x coming on November 4 with a big battery

4,300 Amp battery is the only disadvantage, am sure it's consumption capacity is quite high therefore a 5,000+ Amp would be ideal.