New powerful Huawei handset pops up on GFXBench, could it be the Mate 8

The Huawei Mate 8 has proven quite an elusive device to say the least. Despite frequent visits to the rumor mill in the last few months, we are still not entirely sure what to make of the eagerly-anticipated Ascend Mate 7 successor. All the information we have so far seems to be oddly mixed with rumors of the Huawei Mate S, but with the latter now official, we are more inclined to believe a recently uncovered GFXBench listing, that is said to come from the Mate 8. 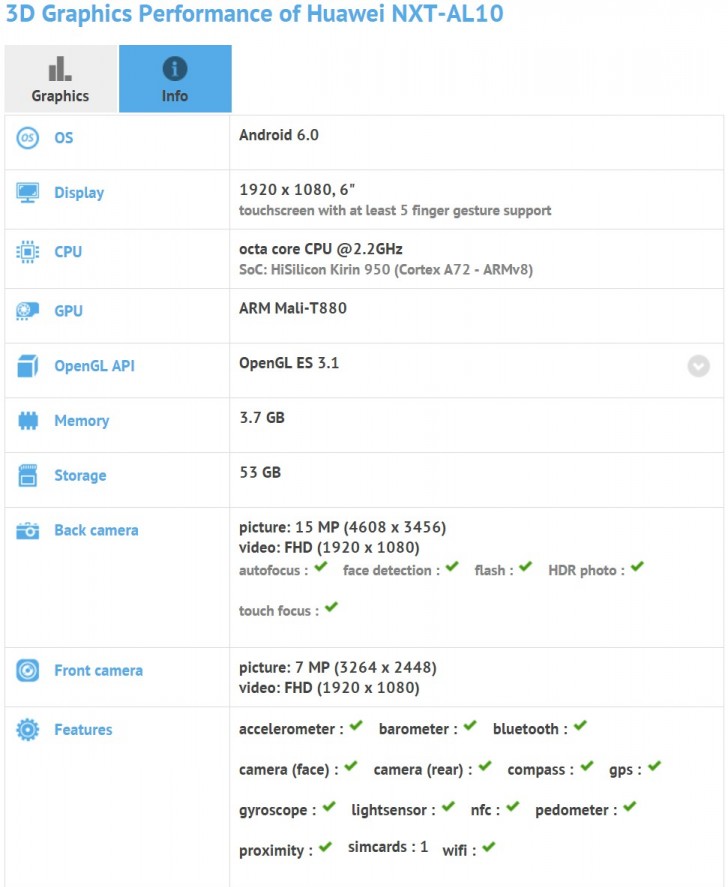 According to it, the beastly handset, referred to as "Huawei NXT-AL10", will spout a large 6.0-inch display, just like previous rumors have suggested. However, another recent source hints at QHD resolution, whereas this result suggest a FullHD panel. It might be a detection issues or perhaps even a forced resolution, as the rest of the data does seem to mostly match up.

The phone is said to be powered by the OEM's new custom Kirin 950 chipset. It promises to deliver unprecedented power thanks to a 16nm FinFET production process and a big.LITTLE architecture, with four Cortex-A72 cores running at 2.2 GHz or perhaps even 2.4 GHz and another four Cortex-A53 ones, clocked at 2.0 GHz.

The bundled GPU is the impressive ARM Mali-T880, which should also be joined by an i7 coprocessor and a Tensilica Hi-Fi 4 independent audio chip. The GFXBench sheet also lists 4GB of RAM and 64GB of on-board storage (well 3.7GB and 53GB, to be exact) and previous info also hints at a less powerful 3GB version, with 32GB of bundled space.

As for the camera, what was previously said to be a 13MP main shooter is now being reported as 15MP, with a maximum resolution of 4608 x 3456 pixels. Some quick math reviews that this is actually a lot closer to 16MP. The second camera is said to be 7MP with a resolution of 3264 x 2448 pixels.

Other specs on the Mate 8 should include dual SIM support, a microSD card slot, NFC and perhaps also a fingerprint reader and Force Touch display, like the Mate S, but the latter two are largely unconfirmed. In any case, we will know for sure come November 26, when Huawei should finally unveil the phone. The high-end device is said to carry a CNY 3,299 ($520) price tag for the 3GB RAM variant and CNY 3,899 ($610) for the 4GB one.

Finally a mate 8,using the mate 7 now and its still a beast it will get marshmallow and all but i will get this one when it comes out.

Based on Previous experience with Mate 7 and P 7. The produce some of the finest products in Mobile phones. I never had any issue whatsoever with the software. It was always ready to deliver maximum output. I am looking forward to Mate 8.

This is gr8. I am using Mate 7, and I think FHD screen is enough. I would rather have battery life crazy long as Mate 7 then QHD display. These are exact specifications I was hoping for! With new Kirin 950 this will flow perfectly and break every ben...