Nexus 6 vs. Galaxy Note 4: A game of Battleships

A game of Battleships

Google and Samsung. The two pillars of Android are good at being partners, but their rivalry is even more exciting to watch. Especially when they pull out their best. The Nexus 6 and the Galaxy Note 4. The two want to be the defining Android device, the benchmark for all other phones to go by. What they certainly don't want is share - the fame, love, the profits. 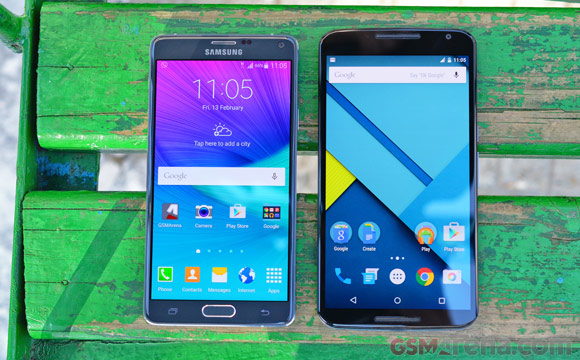 Although the Samsung Galaxy Note 4 and the Motorola Nexus 6 come from very different company cultures, they are actually surprisingly similar - in a good way! They have a solid metal frame with a soft-touch plastic back, a large AMOLED screen with slim bezels, a beastly chipset and a quality camera with OIS. Yet, each has its own advantages.

Google is sub-contracting its Nexus devices and didn't favor Motorola (until recently a wholly-owned subsidiary) over other makers. Now that Motorola changed hands, Google saw it off with a bang, the first Nexus phablet. Samsung worked on two Nexus iterations too, but those days are gone. Now it likes to assert its leadership and TouchWiz is front and center to maintain brand identity.

What brought the two together is technology, the best of it. Google guided Motorola to get the best hardware available. Samsung went after the best components because they're trying to dominate the landscape by offering more features than anyone else.

The different corporate cultures do transpire in certain ways. Samsung wants to be a market leader - in business (S Pen attracts heavy note-takers), in e-commerce (fingerprint-secured mobile payments), in healthy lifestyle (with a bunch of sensors and relevant software).

Motorola Nexus 6 and Samsung Galaxy Note 4 before the fight

Until now Google just wanted a platform to show off its software, but with the Nexus 6 it feels like it's promoting the entire Google ecosystem. There are stereo speakers (to support Google Play Music), a large screen (Play Movies), capable camera (for Google+ Photos and YouTube), but no expandable storage (you are supposed to use Google's cloud storage instead).

There's one thing the two companies have in common though, they want to be the ones steering Android as it continues its road to market domination. Google is pulling the reins through tight control over the OS, while Samsung is flexing its manufacturing muscle. The outcome here will depend on both hardware and software. Jump to the next page to see which way the first battles for the Android throne go.

Hi friends as I am note 4 user from three year I want to share my opinion I don't know why people blame but apart from may be samsung strategy note 4 is one of the best phone as I am heavy user before 2 year after updating Mr. 6 suddenly I was face r...