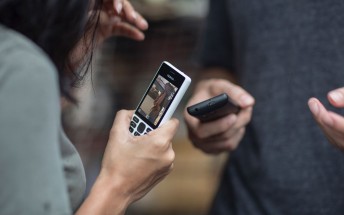 This isn’t the Nokia launch that the Dutch may have hoped for, but the Nokia 150 is now available in the Netherlands. The black model will set you back a meager €37, the white version will arrive at a later date.

There’s something to be said about the reliability of a phone with a month-long standby and 22 hours of talk time.

By the way, this is HMD's first phone back in Europe and even if you're not interested in it, a certain Nokia 6 shouldn't be far behind. We're eager to hear about HMD/Nokia's expansion plans at the MWC.

Now, some carriers are killing off their 2G networks and the Nokia 150 is 2G-only, but that shouldn’t be a worry. The Chief Network Officer of Vodafone Netherlands said last year “We are still maintaining our old networks, and modernizing the network, also still delivering 2G and 3G services to the customer. And yes, 2G will continue longer than we expected.”

Thanks for the tip, Tim!

Nokia and Orange will develop 5G networks together

Normally your sentence seems to be logical, but look over the article... Netherland can not be considered as a 3rd world country.

Many operators are not using 2g any more.In many countries in Europe and America there is virtualy no use of a phone like this one. Nokia is making 2g phones for the 3rd world countries cause that`s what the average byer there can afford. It is all ...