Let's be frank here, we all know that there is only one true material worthy of the original old-school Nokia experience and it's definitely not brushed aluminum. Joking aside, the Nokia 3 is mostly using polycarbonate and does it well.

We've said this before and we'll say it again: plastic has plenty of benefits - better shock absorption and overall durability for one. The Nokia 3's back side is covered up by a pretty light and soft layer, which has a great silky-smooth feel to it and looks prepared to take a lot of abuse.

The absence of unsightly humps is definitely a plus, but HMD could have gone the extra mile and made the rear removable as well. There is even a slight gap between the screen and the back plate that gives off the distinct impression that you can pop the Nokia 3 open, pretty old school. Perhaps even slap on another colorful piece of plastic, which used to be a Nokia staple. Still, this is more of a comment on a missed opportunity than criticizing an overall pretty sturdy and well-built phone.

Nokia 3 in the hand

And the plastic back is not the only thing that gives the Nokia 3 an eerie kind of similarity to older Lumia generation devices. The overall design language is definitely shared and it's no coincidence either. Sticking to a familiar appearance is a pretty sound strategy in the process of re-establishing the legendary Nokia brand. If nothing else, staying true to tradition might be the credibility-boost that an emerging company like HMD could very well use.

Plus, HMD sprinkled some 2017 styling on the Nokia 3 as well. Despite its budget nature, the Nokia 3 is set inside a metal frame. Again, there are a few details here and there we don't particularly enjoy, like the antenna bands of questionable necessity, given the all-plastic back. Still, we really dig the matte black finish.

As far as controls go, the button layout is pretty standard. A volume rocker and power button sit alone on the right bezel, positioned pretty high up. We found it to work pretty well for the most part on a 5-inch phone but having large hands would definitely help.

On the flip side, the relatively compact 143.4 x 71.4 x 8.5mm Nokia 3 coms with two card compartments. The Upper one is for SIM cards - one or two nano SIM chips, depending on the version. The one below that is a dedicated MicroSD card tray, for up to 256GB of additional storage. And just in case you were wondering, yes, the emphasis on the compact size of the Nokia 3 is definitely thinly veiled criticism against all the manufacturers out there opting for hybrid solutions on significantly bigger devices.

As for the bottom and top bezels, you get a 3.5mm audio jack above the earpiece. Next to it is a secondary noise-canceling mic - a rather uncommon feature in the budget segment. A micro USB connector sits in the middle of the bottom bezel, flanked by a single speaker. We have to admit, we kind of like the simple grille design. 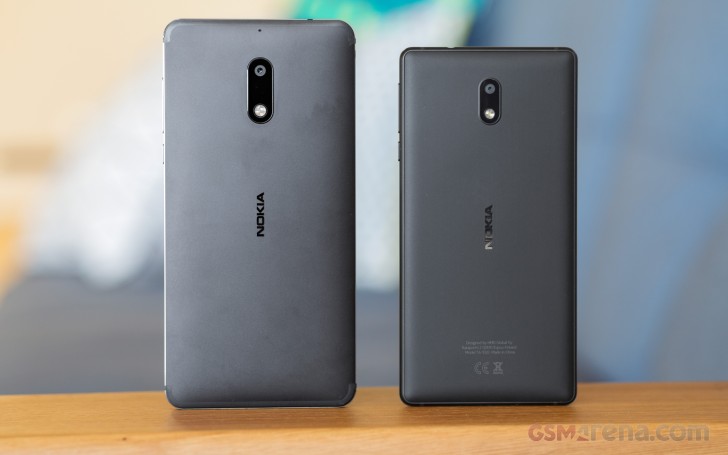 The loudspeaker on the Nokia 3 is surprisingly loud and managed to score a "Very Good" rating in our test routine. You can definitely count on the little smartphone in a noisy environment, especially if you opt for a higher-pitched ringtone, since the equalizer seems to favor those.

Just to round the hardware tour up, the front of the Nokia 3 looks pretty slick with its 2.5D edges, slightly tapering off at the side. We find it a bit hard to believe the finish is Gorilla Glass, since it doesn't really feel rigid or smooth enough. Then again, our review unit got away without a single scratch after being tossed around the office quite a bit, so the screen glass appears to be doing its job well enough.

Navigation is handled by a trio of capacitive buttons. These are not backlit and can't be remapped, so you better make sure, you are comfortable with the arrangement. Other than that, the keys are perfectly responsive and won't let you down.

Speaking of dependability, the Nokia 3 is pretty well equipped on the connectivity front. The Dual-SIM option is a good value package and Cat.4 (150/50 Mbps) LTE seems to be the minimum requirement in the budget category in 2017. 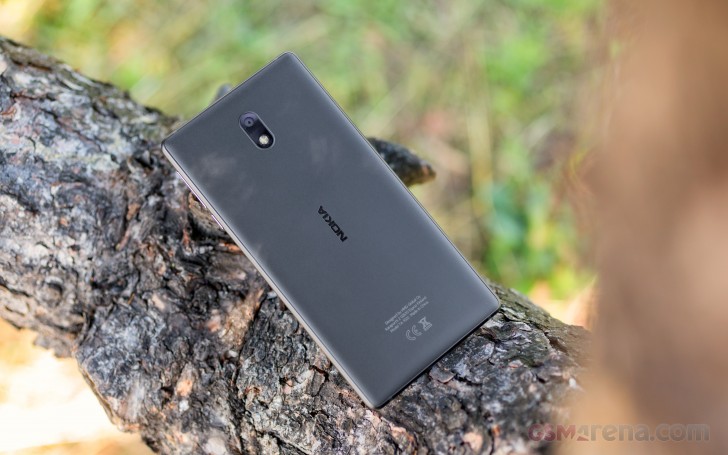 The entry-level Nokia doesn't skip on local connectivity either. It has dual-band Wi-Fi 802.11 b/g/n, with support for Wi-Fi Direct and a hotspot feature. The only thing it seems to be missing overall is 802.11ac, which we can't realistically expect in a sub-$200 phone anyway. Other small, but still interesting added value features include Bluetooth 4.0, with Low Energy profile support, USB OTG, and FM Radio, with RDS, NFC, as well as a decent set of sensors: accelerometer, gyro, proximity, compass.

It's really nice to see the Nokia 3 fully prepared to meet a modern connected lifestyle. Sadly, HMD made plenty of cut-backs in other areas.

For one, there is the battery. The Nokia 3 packs a total of 2630 mAh, which is definitely on the low-end. Just to put things into perspective, competing offers, like the Xiaomi Redmi 4 pack 4100 mAh in a body that is almost identical in size. If you have been keeping up with our recent review coverage in the budget smartphone segment, then you might remember we complained a lot about the batter downgrade in the Xiaomi Redmi 4a. Still, that phone has 3120 mAh.

Then again, one could make the argument that Sony Xperia L1, which we also reviewed recently, has a similarly sized 2620 mAh battery, an almost identical Mediatek MT6737T chipset and a 720p LCD display. True, but it didn't exactly shine in the battery department, only scoring a 63 hour endurance rating.

The Nokia 3 finds itself in pretty much the same boat, which should come as no surprise, given the many similarities between the pair. In fact, it did even worse, scoring only 53 hours of endurance in out standardized test.

Looking at the numbers, the phone actually appears to handle itself pretty well during calls and web browsing. Even video playback is decent and that endurance number is achieved using the Google Photos app. We are pretty sure a well optimized dedicated video player app can do even better. Standby is the main issue with the Nokia 3. After multiple runs, it only managed to last 150 hours or so idling in standby, connected to the network with the screen off and Wi-Fi on.

Plus, to make things worse, there is the issue of charging, or rather, the lack of any fast charging solution. This is another grudge we had with the Xperia L1 as well. Still, to HMD's credit, at least the Nokia ships with a proper 5V@2A charger (not a 5V/850mA, like the Sony). 2A is the maximum rate at which you can replenish the 2630 mAh pack and that is enough to get it from about 3% or so of residual charge to 50% in about 45 minutes. A pretty slow charge for a battery pack of this size.

As previously mentioned, the Nokia 3 has a 5-inch, 720p display - kind of the norm for budget offers these days. The panel is also surprisingly good, again considering the Nokia 3's sub $200 price. The "plasticky" finish on top is what drags the experience down a bit and adds some unpleasantly high level of reflectivity. 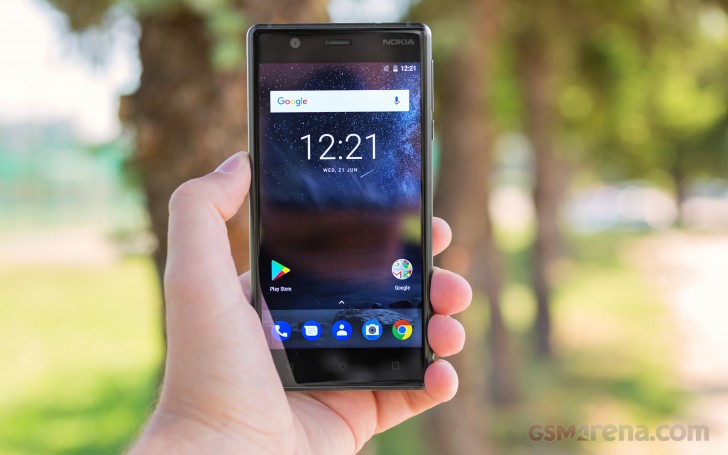 The Nokia 3 is plenty bright, topping out at around 477 nits. That is pretty comparable to the likes of the Xiaomi Redmi Note 4 and the Sony Xperia L1. Adaptive brightness is also enabled, but it is a little bit sluggish in reacting to changes. There is no "Max Auto" though, or outdoor boost feature, to temporarily go beyond 477 nits.

A tiny amount of light bleed is noticeable in black at 100%, but nothing really unusual for an LCD. Contrast is also pretty good - comparable to what you get from a Xiaomi Redmi Note 4 and noticeably better than on the Sony Xperia L1.

Color accuracy is not a strong point of the Nokia 3. It managed an average deltaE of 9, with a maximum of 15.1, with brightness at full blast. Bringing the panel down to the standard 200 nits we use for certain battery testing scenarios, only made things worse. The display simply has a distinct Cyan, Blue-Greenish tint to it.

You don't get any color modes or manual correction options out of the box, but HMD did throw in a few interesting color correction schemes. These are experimental and meant to help people with particular types of color blindness. Fun to play around with for sure, but not really usable for most and they do take a noticeable toll on performance.

Sunlight legibility is on par with similar devices. That is to say, it is not spectacular in any way, but still decent enough for outdoor use.

My phone is mostly unreachable although I hardly put it off.