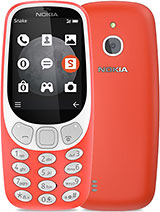 Very sad. I tried to put my digital COVID Certificate from EU (QR-Code) on my Nokia 3310. A check showed that the QR-Code cannot be read. Obviously the display of Nokia 3310 is not sufficient.

3G, 26 May 2021GoodI tried to download simple videos on nokia 3310 and when i tried to watch them, i could only hear the sound but could'nt see anything accept a dark screen,that was irritating.

The NOKIA 3310 feels and looks durable, I like the keymat it's easy to use and makes no loud sound. What I don't like is the bluetooth 2.1 come on it is too slow this should have atleast bluetooth version 4 and the 3G of the dual sim is only supported for the sim 1 the sim 2 is just 2G. What I really like the most about this phone is its free headphone, I like to use it in 4G hd sound smartphone because it's so clear soft loud sound that doesn't hurt my hearing.

Long battery life, decent sound quality, fits in a pocket — overall I'm satisfied with the phone. Reliable reserve phone for basic stuff if smart phone's accumulator gets discharged.
I put 32 GB micro SD card in it. No other use except photo storage have I discovered by now.

The only drawback which really frustrates me is a very limited amount of sms. I've got to delete them periodically to be able to receive new ones.

Anonymous, 11 Jun 2019Yey! They bringed back the classic! I'm happy with this! My 3310 2019 i cant download or use java app and it doesnt come with facebook app what is the problem? Is it that it does not surppot it or what is the problem.

In my opinion, internet browsing is only for touchscreen mobile phones and NOT in this keypad ones! There is no use being a 3G since (in my own opinion, experience & intent of its use) I personally won't use it for internet because it has limited screen for browsing and keypads navigation is very limitedly and awkwardly not at ease in browsing as well as you won't be happy with its speed. So I solely use this in call & text, alarms, calculation, note taking, emergency backup, etc.

These following feature has been removed:
😩The 4 navigational keypad (the up & down, right & left navigation at the center, at the top side of number keypad) is of little use.
😩The General, Loud, Mute, Discreet Sound Profiles (the DO NOT DISTURB feature in touchscreen mobiles) is gone. So when I set it to mute when I sleep (I use this feature to avoid prank callers waking me up at night as my phone is always set to Loud Profiles), it automatically expires & return to Loud Profiles at the set time (present in Nokia 101 & Nokia 3310 2G TA1030 & "absent" to Nokia 3310 3G).
😩The "go to" left and right key has limited options.
😩Its sound quality is not as good as Nokia 3310 2G/Nokia 101 and not that loud.
😩Opening the message has limited navigational options.
😩Note (for taking notes) has been removed or not added.
😔The settings for having different ring tones & text message tones for each sim (sim 1 & sim 2) cannot be personalized & or missing. So I cannot tell beforehand whether a message or call is from Sim1 or Sim2.

Therefore I conclude: the former manufacturer of Nokia Phones are much thoughtful to take into consideration the things I mentioned above.

One thing I also thought they should also take into consideration is to add back: the SEND LATER option & SEND TO GROUP text message option.

holy christ?!!!!where are nokia going to hopes we lost

Waqas, 24 Sep 2020I am using this mobile but suddnly one off my sim card is s... morewaqass is that you? i also use this buy i found the battery being faulty now. i just charged it today and at night i found it dead? so i charged it again and will observe. this only happened after i switched to 3g only mode...

I am using this mobile but suddnly one off my sim card is stoped working.now i am using itwith single sim card.does anyone have the sloutuon please

(There are also the 2G and 4G models, which also run different operating systems, but I'm just talking about the multiple versions of the 3G model.)

Does anyone know if 2g keypad will work for 3g

Purchased the 3310 3G a few months ago. It's useless. The backlight function renders the keypad unreadable in daylight. There should be separate backlights for the screen and keypad. It's difficult to see the contents of the screen on a sunny day - maybe black font on a white background would be better than white on black. I'll try to trade it in for something that is actually usable as a phone.