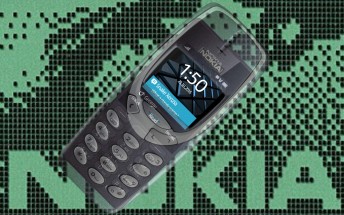 You may have heard of the legendary Nokia 3310 and may have heard that Nokia is bringing it back in a couple of days at the Mobile World Congress 2017. But otherwise details have been scarce on what exactly the 3310 reboot will be.

All we've heard is that it will have a similar, if not the same design and a larger, colored display.

But the popular leakster around Evan Blass has a few new tidbits on the new Nokia 3310. According to his sources it will run on Series 30+ - a feature phone OS that runs on recent Nokia-branded phones like the Nokia 150.

The new Nokia 3310 will come in multiple colors and swappable faceplates (old Nokia users will remember this was a popular trend among phones back in the day).

As for the design according to Blass the new device will look like a mix of the old 3310 and the new 150 - have fun imagining that.

We don't expect Nokia will conquer the phone market with a revamped version of a 17 year old phone but we're very eager to see its return.

Nokia to livestream HMD and Withings event in 360-degree

Global variant of the Nokia 6 gets certified in Taiwan

Nokia should bring back 6300 as smartphone with touchscreen. Just small enough to fit perfectly in any pocket and in any hand:-) 6300 is the best one they ever made.

Is this a smartphone? Apps? Whick OS? Android?

Are there apps for the OS?