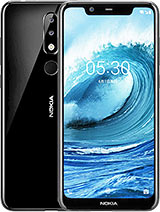 Aadrian, 02 Feb 2021January patch for the 5.1 plus is rolling out. Highly recommend this phone for a low budget gamer...it's powerful for modern games...bought it and have never regretted

Very worst experience since last few months after using more than one year..main problem is charging ..not any position its getting charged, even after a long time or overnight connecting...
Very disappointing Nokia

Mine doesn't come with glass back material its plastic

Kamaa, 04 Apr 2021Best definition of a stupid phone, mine had inner screen is... moreLmao bad for you man my 5.1 Plus is running like clockwork since 2019 still good I love it but I might upgrade to a 5.4 or maybe the new Nokia phones that will be released i like have a bigger screen I can recomend Nokia to everybody. Cheers mate

Abbey , 02 Apr 2021best phone ever ..... two years now and still looks brand n... moreFor me too it is a great phone mine is the white color looks great I use a cheap tpu case for protection and it serves me well, the phone itself is amazing still getting fast updates and it is not even a flagship phone, but still made of glass front and back, plastic trim feels premium over all the phone feels premium that is the best about it. Good job thumbs up!

Aadrian, 09 Sep 2020Yes the phone is very slippery. I bought a thin feel transp... morebest phone ever ..... two years now and still looks brand new. no issues at all, infact i can still sell for a very good price

It is irritating when the 'google assistant' keeps popping up once a while asking to 'voice unlock the phone' when listening to radio with my earphone, I think it started after security update in Jan. Any suggestion to put this 'GA' aside? thanks

Not a vol LTE mode phone

January patch for the 5.1 plus is rolling out.

Add face lock in this device then it wil be the best phone.

Ask, 10 May 2020Came across a common problem for recent nokia phones, which... moreI've been using Samsung Galaxy phones enough longer to say that Samsung USB especially micro USB ports are tough and resistant. I could barely keep a Nokia or Huawei less than a year without the micro USB port get damaged and the phones couldn't charge anymore while on my old galaxy grand prime plus which has been serving me for 4 yrs after several plug and unplug, whether it's for charging or for OTG, it's usb port never broke once. You want to buy a cheap phone without ruining yourself, go for a galaxy A series, they got much bigger battery than the actual Nokia's out there, and comes with the fast charging capabilities too

I upgraded my x5 to android 10. But, it's now taking a long time to charge. What could be the problem?

i have the phone 1,5 years no issues with charging port at all i just charge it every 2 days no problems at all still all is fine so i think im doing something normal

Rishabh Singh, 14 May 2020I am facing charging problem plz in this time because of lo... moreIt's a hardware issue. There is nothing you can do.

Nick, 22 Nov 2020Very good security on android 10I have had similar issues with mine, the charger needs some bit of twisting at the port for better performance. I found a way to monitor this was by installing AccuBattery app, it helps me check the charge current, less than 300 is slow, 300-800 is okay, 900-1500 good & anything 1550+ is great.
Anyway, i hope that helps

ASTRAL King, 19 Nov 2020I have been using this phone for nearly 2 years now but now... moreFone is a good phone but it's starting to take long to charge